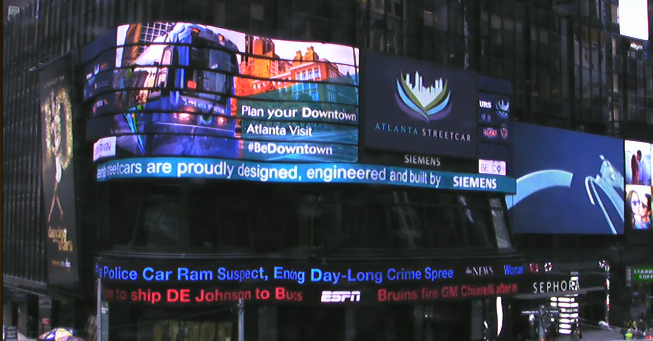 For the next two weeks, New York City tourists will be urged to consider  future trips elsewhere—downtown Atlanta to be specific. A giant ad running on the “ABC SuperSign” lets travelers to NYC know that “downtown Atlanta is on the move.” The ad was arranged by Siemens, which manufactured the Atlanta trolley system—and at least some of the components of the mega LED billboard that scrolls above the “Good Morning America” studio.

The ad, which began airing Monday and will run through April 26, features the happy crowds—among them mayor Kasim Reed—at the streetcar’s debut in December, and promotes the #BeDowntown social media campaign from Central Atlanta Progress. If you want to catch the ad in real time, there’s a live feed of the SuperSign. Who knew?

Atlanta’s civic personality combines a curious mix of brash self-promotion and constant anxiety about measuring up. Whenever I see Atlanta promoted in other places, I’m reminded of the Forward Atlanta campaign of the 1960s, in which our city’s assets—the airport, low cost of living, rising skyscrapers, and so on—were touted to executives via ads in the New York Times, Wall Street Journal, and other publications. Those ads in turn were reprinted in each issue of Atlanta magazine, to let image conscious Atlantans know how their town was being marketed.

I wondered if CAP might consider similar ads in downtown Atlanta—for instance on the giant billboard at 218 Peachtree Street that presently features a smiling mayor Reed welcoming visitors to Atlanta. Spokesperson Kathryn Rusche said nothing like that was planned but it might be considered down the road. (The New York ads are part of a “strategic alliance” between Disney and Siemens, according to a spokesperson for the electronics company. No taxpayer or streetcar operating dollars went toward the campaign.)

It might seem wise to invest in a campaign targeting people most likely to ride the Atlanta Streetcar: you know, Atlantans. But thankfully the city has done something more effective: keeping the streetcar fare-free through the end of this year. In my admittedly limited experience, this tactic is paying off. I’ve been overhearing fellow passengers praise the fare waiver and eagerly tell tourists about it. After commuting by streetcar since January, I’ve noticed something new. Before, I used to ride home in an almost empty trolley, but in the past few weeks I’ve had to hunt for a seat.

Getting more people in Atlanta to actually use the streetcar will better contribute to its long-term success than any ad campaign. As we say in my line of work: Show, don’t tell.