State representative Tyrone Brooks has long been one of the most-popular legislators at the State Capitol, well-liked by both his fellow Democrats and many Republicans. So it’s no overstatement to say that most folks were genuinely shocked earlier this month to hear the sixty-seven-year-old Atlanta civil rights leader had been charged with thirty counts of federal wire and mail fraud involving the theft of money from organizations he headed.

Shocked, that is, that prosecutors would go after such a beloved figure, but perhaps not completely surprised by the nature of the accusations.

From one year to the next, there always seem to be a handful of state lawmakers who have no visible means of support, and Brooks has long been on that list. First elected to the state House in 1980, Brooks’ primary day job has been as president of the Georgia Association of Black Elected Officials, which he apparently ran out of his office in the Legislative Office Building across from the Capitol. If that was, as some suspect, a misappropriation of state resources, nobody made a fuss over it. Even the most partisan Republican would’ve thought twice about the PR blowback likely to accompany an attempt to oust an African American group of that kind.

Even years ago, Brooks was known for being sloppy with paperwork; he maintained an entire room in his LOB suite just for GABEO records, with papers and boxes stacked around in haphazard fashion. In fact, lousy bookkeeping appears to be Brooks’ main defense, as stated at a press conference last week by his attorney, ex-governor Roy Barnes.

By contrast, the forty-eight-page federal indictment goes into excruciating detail as it alleges how Brooks took in corporate contributions to GABEO and Universal Humanities, a charitable organization he oversaw, and converted that money for his own use. Even worse, the indictment effectively describes the charity as something of a slush fund for which Brooks collected tens of thousands of dollars in donations, but which failed to provide the literacy-promoting activities it claimed.

“This case has been an eye-opener for many elected officials, who realize they need to be as careful with the funds they manage as they do with taxpayers’ money,” says Ashley Bell, a former Hall County commissioner who serves as general counsel to the Georgia Conference of Black Mayors.

Bell says it’s quite common for volunteer-based organizations like GABEO to be run as labors of love by a small group of insiders—or even by a single person—with limited oversight. In those instances, the person in charge can begin to feel a degree of entitlement, even ownership. It’s vital, Bell says, for even the most well-meaning politician to be vigilant in making sure that charitable funds aren’t commingled with his own personal assets.

According to the indictment, Brooks received an annual stipend of $4,800 from GABEO. But, the feds allege, he also wrote checks to himself from a GABEO account, claiming the money fraudulently as reimbursement for expenses.

The scuttlebutt among local politicos is that it likely wasn’t a disgruntled GABEO member who complained about Brooks to the FBI, but rather a large corporate donor that was unable to claim a charitable deduction from its contribution. The indictment traces a number of large gifts from such companies as Coke, Georgia-Pacific, and Northside Hospital that allegedly ended up in Brooks’ pockets. Records show that Universal Humanities lost its 501(c)3 tax-exempt status for the year 2011, apparently because Brooks did not supply information requested by the IRS.

I talked to no one who wants to see someone of Brooks’ background go to prison, even those who are uncertain of his innocence. But this is a federal case and the FBI typically doesn’t mess around. It will be interesting to see how he is received by his colleagues at the opening of next year’s General Assembly. 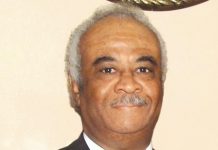