Baker’s Emu Nest | Griffin | 32 miles south of Atlanta
The affectionate female, Lilly, had eyes for an emu stud named Leo. But so did a larger gal named Lola. So in an episode that made high school catfights look tame, Lilly chased Lola until she crashed into the chain-link fence of their backyard pen, and Lola was removed. Now Lilly and Leo are a thing—mates for lives that could span 60 years. In the early 1990s, Jim Baker’s parents invested in a herd of six emus, the world’s second-largest bird (about six feet, full grown) and a ratite cousin of the ostrich. Three miles from Atlanta Motor Speedway, the 11-acre farm soon swarmed with more than 230 birds (one female produces about 50 eggs a season) and spawned several copycat operations—until everyone retired from the labor-and-cost-intensive emu game in the span of a few years. Then came the recession. When Baker lost his job working with sheet metal, he and his wife, Deb, thought they might try making personal care products from the large supplies of emu oil still frozen (to this day) in storage at his parents’ farm. Thus was born Baker’s Emu Nest, which didn’t stay mom-and-pop for long. Almost every bit of a processed emu is usable, including their supple hides and lean meat, long, soft feathers, onyx-like talons, and the liquid gold that is emu oil. Extracted from the layer of fat on the birds’ backs, the antibacterial oil helps relieve everything from eczema, arthritis, and gout to razor burn and yellow jacket stings. With their inventory of pure oils, shampoos, body butters, lotions, soaps, lip balms, and more, the couple now have distributors across the country. Demand is so high for Lilly and Leo’s chicks that most are sold (at $250 a head) within five days of hatching. That doesn’t mean letting go is easy. Lilly starts laying mini-football-sized eggs each October, and Baker incubates them in his garage, carefully turning and weighing—and whistling to—the eggs each day so that newborns recognize his voice and promptly feel at ease. “These are our pets, our babies,” he explains. But Lilly is on another level. As Baker enters her pen, she’ll often drape her long neck across his shoulder, gazing up with wide-set amber eyes like an adoring daughter. 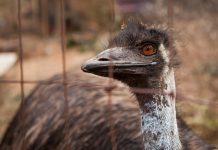