Atlanta has often been dubbed a car-dependent city. However, our region ranks high for future walkability, indicating a demand for greater density both intown and in the suburbs. In a recent study, George Washington University identified significant walkable urban places—which researchers dubbed “WalkUPs”—within metro regions. They found 558 WalkUPs within the 30 largest metro areas, and 27 were in metro Atlanta.

If you’re looking for pedestrian-friendly communities, consider a few of my favorite areas, such as the intersection of Ponce de Leon and North Highland avenues. Ponce is on the cusp of two walkable neighborhoods: Virginia-Highland and Poncey-Highland. The former has garnered a reputation for vintage stores, quaint little boutiques, and college bars, while the latter has become a hipster hangout. What’s not to love about the merging of two communities with distinct vibes? Whether you walk, run, or bike, you’re guaranteed to meet interesting characters each day. There’s the added convenience of finding every store you need along Ponce. Another area I adore is downtown Decatur. I’ve heard it described as “Where Mayberry meets Berkeley.” The city has a hearty family vibe but has also emerged as a college town due to its proximity to Emory University and Agnes Scott College; the academic influence contributes to the area’s diversity and progressiveness. A MARTA rail station underneath the courthouse square offers convenient access for visitors to the wonderful restaurants, shops, and events, such as the annual Labor Day book festival (the largest independent one in the country) and the perennially sold-out craft beer fest in October. If, like me, you appreciate the serenity of living a bit farther out of the city but still enjoy a bustling vibe, then Roswell may appeal to you. This small city has a charming downtown area—two, actually: the historic square and the Canton Street district. Both have restaurants, shopping, markets, and art galleries. There are adorable historic homes in the areas below the square and above the Chattahoochee River. You won’t find gridded neighborhoods like those inside the Perimeter, as the area is more suburban, with large lots and cul-de-sacs. But the city is adopting new zoning codes and architectural guidelines that encourage walkability. The plan is based on one that city founder Roswell King created in the 1830s, when walking was how most residents got around the one-square-mile town. This article originally appeared in the Spring 2015 issue of Atlanta Magazine’s HOME under the headline “Walk this way.” 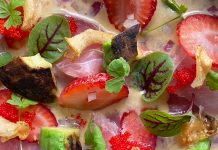