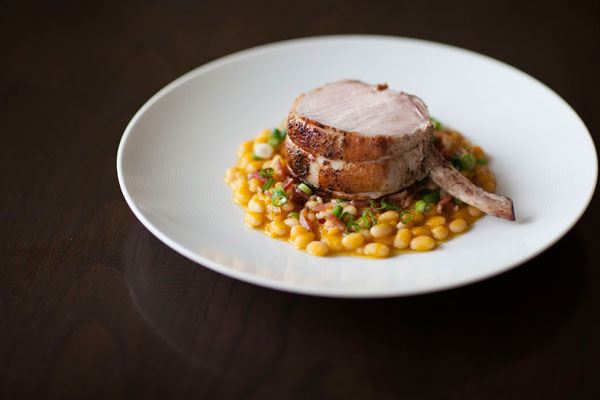 Pano I. Karatassos—wearing faded jeans and a loose T-shirt, his signature pin-striped chef’s apron nowhere in sight—welcomes me into the state-of-the-art kitchen of his parents’ Buckhead home. Raw vegetables, herbs, cutting boards, and cooking utensils are neatly organized in workstations, as if a television food show is about to be filmed. But Karatassos—son of I. Pano Karatassos, the powerhouse founder of Buckhead Life Restaurant Group—insists he has not staged this for the sole purpose of our photo shoot. In a few hours, his two siblings and their spouses, and the seven children between all of them, will join his parents in a feast of the white bean stew and pork rib roast he is about to prepare.

“For our family every Thursday is Yia Yia Day,” he explains. “Yia Yia,” Greek for “grandmother,” refers to his mother, Georgia, who typically takes charge of the weekly family meal. “Yia Yia” was also the name Karatassos called his maternal grandmother, Athanasia. It was she, he says, who stoked his desire to cook long before he began flipping chocolate crepes and filling crocks with escargot as a teenager at his father’s flagship restaurant, Pano’s & Paul’s. Both sets of grandparents were first-generation Greek immigrants who ran food shops in Savannah. When he was a youngster, his Yia Yia came to live with his family in Atlanta and cooked for them every day, often inviting her grandson into the kitchen to help. “My grandma made beef stews, baked pasta dishes, and probably the best fried chicken I’ve ever tasted in my life. She would spike it with extra virgin olive oil and put a little oregano to the flour,” he remembers. “I can still see her standing over this big bowl, pounding dough for pasta. Her arms were really strong. We used to walk by her and feel her triceps, just to tease her.”

One of her specialties that remains a family favorite is fasolatha, a vegetable-rich white bean stew from the old country that turns up at Kyma as a bed for Greek meatballs. For an extra layer of flavor, Karatassos sometimes adds a couple of roasted red peppers and several roasted garlic cloves, squeezed from their skins, to the vegetable mixture. “Tons of families in Athens cook this,” he explains. “There it’s a meal in itself.” For tonight’s gathering, he pours the stew into a large roasting pan, strews it with crumbled bacon as a nod to the South, and sets a crusty roasted rack of pork in the center. The presentation makes for a stunning centerpiece and—for three generations of this Greek-American Atlanta family—a celebrator reminder of their roots.

Instructions
1. In a large container, cover beans with cold water by 3 inches and soak overnight. Drain beans, place in a pot and cover with fresh water by 2 inches. Bring to a boil, skimming foam from surface. Add bouquet garni; reduce heat to medium-low. Simmer until beans are tender, 45 to 60 minutes. Discard bouquet garni. Set a colander over a large bowl and drain the beans, reserving the bean stock. Transfer beans back to pot.

2. Meanwhile, blanch tomatoes by dropping them in boiling water for a few seconds to loosen their skins. Peel tomatoes, cut them in half, and de-seed and squeeze them over a strainer while collecting the juices in a bowl. In a large skillet, heat ¼ cup of the oil over low heat. Add carrots, onion, and celery, cover with a lid and sweat for 20 minutes or until very tender, no browning. In a food processor, place the vegetables, tomato, and tomato juice and puree to a smooth consistency. Add mixture to beans; mix in bean stock to desired thickness. Season with salt and pepper. Place stew into serving dish and garnish with a drizzle of olive oil, the scallions and bacon.

This is an extended version of an article that originally appeared in our June 2012 issue.