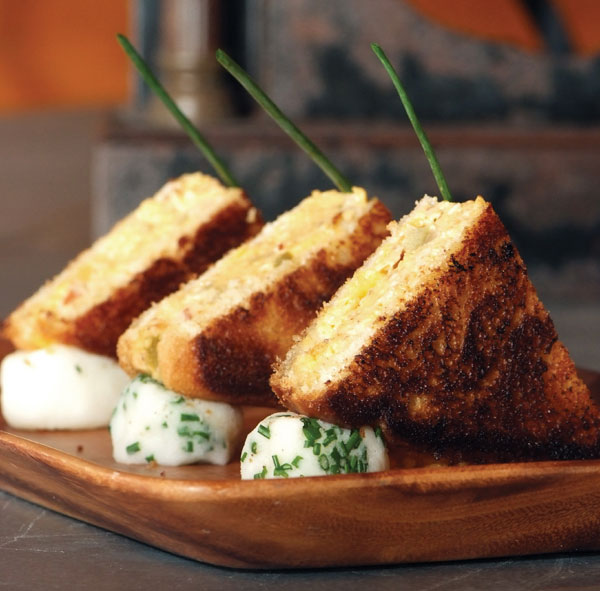 It’s hard to improve upon the most basic formula for pimento cheese: hand-shredded sharp cheddar cheese, mixed with a jar of drained chopped pimentos and enough high-quality mayo for a spreadable consistency. But this one, the specialty of a fun restaurant in Clarksdale, Mississippi, called Rust, comes pretty close. It is featured in The Delta Magazine Cookbook: A Celebrated Collection of Recipes and Culinary Traditions from the Most Southern Place on Earth.

I became a fan of this lovely magazine—especially the recipes within it—while researching my own book about the food of the Mississippi Delta. While visiting Clarksdale, where Morgan Freeman is part-owner of Ground Zero Blues Club and an upscale restaurant called Madidi, I stopped in at Rust where these sandwiches are cut in triangles and served as a stylish appetizer. I later learned that the original chef, Randall Andrews, devised this sandwich as a tribute to the beloved bygone Garmon’s Ice Cream Parlor in Clarksdale, where his father worked as a carhop in his teens.

To the basic formula for the filling, he adds toasted pecans, onion, and pimento-stuffed olives (in place of jarred pimentos), along with a very generous shake of hot sauce. While delicious cold, it is especially tasty served hot—as an hors d’oeurvre, or as an accompaniment to tomato soup.

Instructions
In a large bowl, combine cheese, pecans, mayonnaise, onion, sliced olives, and lemon juice. Season to taste with hot sauce. Chill overnight to allow flavors to meld. When ready to serve, remove crust from bread and spread half the slices generously with the cheese mixture. Top with remaining slices and spread outside of bread generously with softened butter. Grill in a nonstick skillet over medium heat until toasted on both sides. Slice diagonally and garnish with an olive skewered on a toothpick.