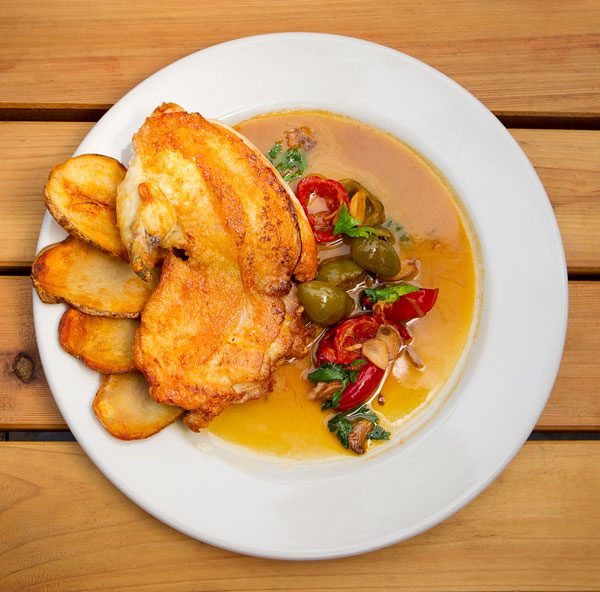 “Hello, and welcome to Cougar Town,” a friend said as we jostled through the crowd at Barcelona Wine Bar. She was eyeing a table of six preternaturally blond girlfriends, clinking sloshy glasses of red wine and shrieking “Happy Birthday” to one of their pack. Scores of other coiffed, forty-something women prowled the central bar, their spiky heels on the wooden floors adding snare-drum rim shots to the growing din of voices.

In the adjoining dining room and on the patio, where a massive fireplace roared and rows of space heaters gleamed red, the throngs seemed more diverse in gender and race, but the age range remained steady. As soon as it opened in October, Barcelona became a beacon for the thirty-plus set that has outgrown Day-Glo martini troughs like Buckhead’s Twist. Restaurants line this freshly urbanized stretch of North Highland Avenue between Elizabeth Street and Boulevard, but not since Sotto Sotto opened down the street in 1999 has an Inman Park newcomer so skillfully captured Atlanta’s zeitgeist.

Barcelona’s buzzy frisson, broad menu of tapas and sharable plates, and especially its love letter of a wine list are hard to resist—though as a champion of local independents, part of me wants to try. This is the first Southeast location of a seven-unit, Connecticut-based operation that launched in 1995. Owners Sasa Mahr-Batuz and Andy Pforzheimer began with a thirty-eight-seat wine bar and graduated to swank, roomy restaurants whose designs incorporate reclaimed commercial materials. And what aesthetic could be more appropriate for Atlanta, where industrial-chic began moving past trendiness a decade ago and blossomed into the city’s signature style.

Atlanta firm Square Feet Studio worked closely with the owners to nail the look, using wood imported from a decommissioned water tower in New York to line the floors and walls. Its gritty, scruffy grain doesn’t so much evoke a cozy cabin as it does a bygone cotton mill (ironic, since Cabbagetown, a half mile away, once housed such a factory). Oversized images of pop culture icons—Sophia Loren drawing on a cigarette with a come-hither gaze, John Lennon striking one of his unshackled poses, Jack Nicholson milking his “Here’s Johnny” moment in “The Shining”—bring to mind America’s and Europe’s heady creative spurts in the sixties and seventies. I’m hearing the owners may replicate this magnetic ambience with other locations in the metro area.

And if the company duplicates its beverage program far and wide with the same fearless approach, I’ll be thrilled. In a town that currently favors cocktails and craft beer, the audacity of Barcelona’s wine list deserves a chorus of praise. It’s so fantastically unfamiliar. Oh, you California habitues can root out a safe Russian River Chardonnay or a Santa Barbara Pinot if you must. These selections, though, compel you toward Spain, Portugal, and South America. The list doesn’t tiptoe into new territory docilely, either: Beyond the two dozen Riojas and ten Argentinian Malbecs or Malbec blends, its pages veer through regions of Spain and catalogs Uruguayan varietals I’ve never heard of before.

In an especially ballsy move, the tome of nearly 200 bottles eschews helpful descriptions. Your education rests in the hands of the staff, who have been astoundingly well trained on the intermediates. They’ll steer you to a juicy, muscular, and uncommon red from Spain’s Priorat county, for example. They’re also refreshingly honest about telling you what they haven’t tried. If you’re feeling adventurous, plenty of the more exotic choices sell in the $30 to $40 range. On Sunday nights, when bottles go for half off, you’ll find me sampling some of the three-digit heavyweights. Equally intrepid options by the glass acquaint you with musky-sweet sherry as an aperitif, or with the minerally Basque grape Txakolina.

The effervescent atmosphere encourages experimentation, and I see as many wine bottles as cocktail glasses on Barcelona’s tables. That alone makes me bless the restaurant’s presence.

If I’ve barely mentioned the food up to this point, there’s a reason: It’s the least compelling element. The ginormous, fifty-six-item menu—including tapas, raciones (sized between starters and entrees), “a la plancha” plates (griddled proteins and vegetables), salads, and mains—overwhelms the kitchen. But if you avoid a few of the outright clunkers, it’s entirely possible to pull together a satisfying meal. Look to the simplest dishes. Start with tapas like potato tortilla (Spain’s classic omelet), roasted garlic bulbs yielding soft cloves, albóndigas (fluffy meatballs slaked with tomato sauce), and sauteed shrimp perfumed with garlic and sherry. I love how the dusky nuttiness of cumin permeates the spinach-chickpea casserole; it reminds me of a North Indian saag. Hearty hunks of chorizo bring welcome kick to caldo verde, the brothy Portuguese stew with kale, potato, and turnip.

Grilled lamb chops, a regular presence among the frequently rotating raciones, have enough meaty oomph to satiate on their own, but a side of romesco (a chunky sauce of roasted peppers, nuts, and garlic) adds intriguing layers of umami. The one entree that sings in my memory is a signature of Barcelona restaurants: the crisp-skinned half chicken resting in a tangy pool of lemon juice and white wine interspersed with cherry peppers for an occasional fiery pop.

These dishes avoided the over-salting trap, which generally marred so much of my meals. Sodium especially blighted the griddled plancha preparations like monkfish served with tepid, twiggy fries. Ditto the grilled skirt steak entree, accompanied instead by overly thick wedges of still-crunchy sweet potato. Collard greens were properly salted, but a Coca-Cola braise imbued them with a cloying undertone. I understand a restaurant company that wants to acclimate to new environs, but please, nix the collards and the brunch menu’s shrimp and grits. We’re already glutted with overdone Southern cliches at the moment.

And a word on the paella: Though I’d heard positive reports, I ordered it twice with not much luck. At first pass, the rice was disappointingly soupy, though the seafood (head-on shrimp, clams, mussels, and squid rings along with chicken and chorizo) arrived precisely cooked. When I next requested it, asking if the kitchen might cook the rice longer to form a proper crust, the bottom layer turned out as a steamed and burned shellac, and the seafood was so overcooked the mussels and clams had shriveled in their shells, desiccated and inedible. Bland flan and meekly flavored churros did little to compensate.

I should have ordered a glass of Moscatel for dessert instead and lingered in the bar’s joyful swirl of humanity. Given the company’s record of successes, I wager the glitches will improve when the crowds simmer down. And really, with the exception of the grim paella, even the mishaps barely diminished the pleasure of the experience. Barcelona defies conventional restaurant wisdom by proving that when a place encourages this much revelry (and serves such good wine!), the cooking isn’t everything. —Bill Addison

Photograph by Alex Martinez. This review originally appeared in our February 2012 issue.