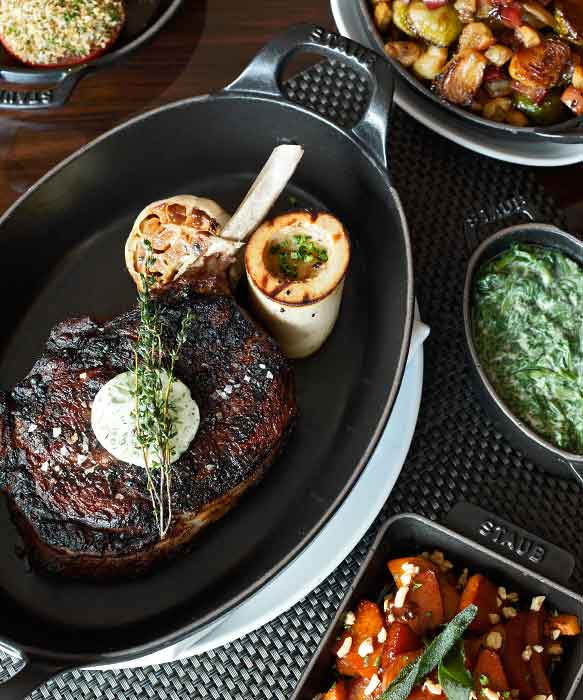 A thin but significant crack has appeared in the dining public’s accepted wisdom about steakhouses, dividing our perceptions toward these wellsprings of rapaciousness into “then” and “now.” The former cradles the archetypes of the American chophouse: wood paneling and hazy lighting, shiver-inducing martinis, the implied (if not actual) whiff of cigar smoke in the air. Many of us can recite the foundations of this menu—from the appetizer shrimp cocktail and the creamed spinach nuzzled against the T-bone to the unnecessarily hedonistic desserts—as easily as we can repeat the Pledge of Allegiance. Bone’s and Chops shoulder such traditions in Atlanta.

“Now” includes all the ventures that endeavor to update the old-guard formula—steakhouse as hipster hangout, steakhouse as wine bar, steakhouse as chain restaurant, often with some sort of gimmicky twist. Most of these concepts ultimately fail, although one alternative has emerged recently that looks to be the future of this genre: the chef-driven steakhouse. Two years ago, Kevin Rathbun Steak introduced Atlantans to the joys of beef with updated starters, sides, and desserts staged in an industrial-swank setting.

Next up in this burgeoning local breed is BLT Steak in the new W Atlanta-Downtown, a New York import whose chef creds announce themselves in its name: The acronym stands for Bistro Laurent Tourondel, after the gifted cook who discovered a few years back that he also commands some formidable entrepreneurial talents. His company has opened ten clones of the Manhattan original since 2006, on top of other concepts such as BLT Fish and BLT Burger. But Tourondel sidesteps quantity-over-quality alarms by employing the same tactic used by celebrity toque Tom Colicchio at his mushrooming national procession of Craft restaurants: He hires capable, proven chefs to oversee these satellite kitchens. In Atlanta, that’s Jean-Luc Mongodin, whose long resume includes a stint as sous chef at Joël.

The dining room, located right off the hotel’s valet circle, entertains none of the steakhouse stereotypes. In fact, its look is assertively neutral, which allows customers to project their own moods onto the place. When I was feeling cynical one night, the decor’s overall beige effect registered as corporate blandness. And the music—an unexpected blend of seventies and eighties pop that included the Pet Shop Boys’ “West End Girls” and two rounds of “You’re So Vain”—ruffled the sedate atmosphere. On another visit, when my frame of mind was considerably more chipper, I could appreciate the handsome details: the interlocking grain of the hardwood floors, the crisp attire of the servers, and the way the restaurant’s signature circular light fixtures emit the buttery glow of a Parisian bistro.

If the surroundings make you momentarily forget, the menu immediately reminds that you have indeed entered carnivorous territory. The back of the single-page menu includes a detailed butcher’s chart showing the precise origins of each cut from the cow. Almost as soon as you are seated, a server will bring a crock of warmed chicken liver mousse and some grilled bread. It ignites the appetite and goes smashingly with cocktails, but resist taking more than two bites.

Because as soon as the table places its order, the staff delivers the next gratis nibble, and this one’s the killer: Gruyère-laced popovers. Bulbous and misshapen, they look like an archeological fiction out of an Indiana Jones movie. Break them in two. They should be steaming. If not, politely request a fresher batch: These babies should be moments from the oven to be fully appreciated. Slather on a pat of butter and give your morsel one good shake from the large saltshaker brought alongside the popovers. Heaven. (Occasionally, in a rush, servers may neglect to give these simple instructions, but it’s one of the few miscues among a doting, professional crew.)

Appetizers, though portioned generously for sharing, are light-handed—a smart calibration. If you’re a chophouse purist, the jumbo lump crab cocktail with Dijonaise sauce from the raw bar or hamachi sashimi with avocado and butter pickles ably fulfills the seafood-before-the-steak ritual. But it’s the salads that really shine among this starting lineup. Satisfy the crustacean hankering with the lobster Cobb, a tightly packed bowl that includes Bibb, radicchio, and frisée lettuces bound by buttermilk Ranch dressing and gilded with avocado, aged cheddar, poached egg, pinwheels of pancetta, and nearly a pound of lobster meat. That composition would also make a stunning lunch. If you ate your whole popover, pull back a couple notches to the clean-tasting chopped vegetable salad.

Does any style of restaurant generate more anticipation for the main course than a steakhouse? BLT capitalizes on that expectation in presentation and execution. At entree time, servers swarm the table with cast-iron crocks and cocottes filled with proteins and sides. Duck breast intrigues with a seven-spice rub and an unctuous sliver of foie gras, and a crispy snapper for two bathes in a ginger-scallion sauce that blessedly avoids cloying sweetness, but the steaks truly seize the limelight. Grilled and then broiled to impart a finishing char, they arrive at the table crowned with a thick round of herbed butter, which disappears into the meat with one swish of a knife. I’m partial to the firm texture and meaty complexity of the rib-eye, but the New York strip has an appealing density and mineral tang, while the filet mignon provides the cushiness its fans crave. The short ribs are short ribs: tender and pot roasty.

Butter-sluiced collards and Brussels sprouts with nubs of chestnuts and bacon stand out among the whirlwind of sides. Those gems may have rotated out of season by the time this review is published, but the evergreen nutmeg-tinged creamed spinach and the architectural stack of crunchy onion rings will pacify until cooler weather returns. As for dessert—do you really still have room? If so, split the airy crepe soufflé perfumed with passion fruit sauce, or relive childhood flavors with the peanut butter chocolate parfait served with banana ice cream. Avoid the sodden banana-date steamed pudding.

And speaking of room: Is there audience enough for both the warhorse steakhouses and their new-fangled counterparts to thrive in this town? Even in this economy, I believe so: BLT Steak appeals to different generations than Bone’s does. And in Atlanta, Tourondel and his company were shrewd to create a built-in client base by partnering with a hotel . . . though even shrewder to devise a vision of the timeless beef palace that also feels modern and relevant.  —Bill Addison