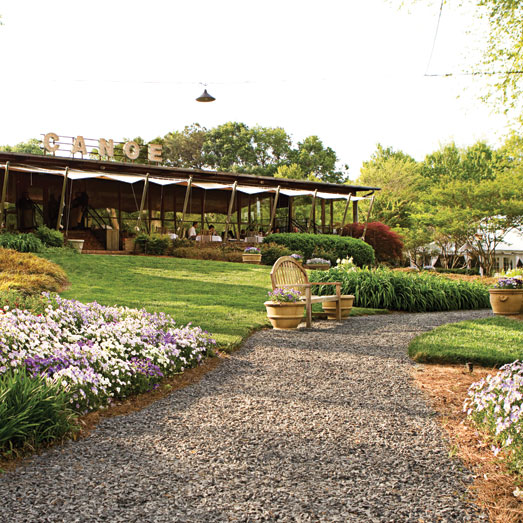 It was a Friday evening commute spent in classic, nerve-jangling Atlanta traffic. The speed-stop-speed-stop flux of cars extended straight from Downtown into the parking lot of Canoe in Vinings, where valet attendants conducted drivers with Wagnerian fervor. My dining comrades were still stuck on the highway; the woman at the hostess station suggested I wait for them at the new outdoor bar.

Canoe’s recently renovated garden looked so idyllic it felt almost farcical, though the dozen shades of spring green (plus a gin and tonic) began unwinding my clobbered senses immediately. The circular, uncovered bar sits on the edge of the Chattahoochee River, with a placid view of the baby-blue bridge that spans Paces Ferry Road. Pebbled walkways ramble through the landscape, lined with trees, shrubs, benches, and Adirondack chairs. Patrons were scattered around the lawn, drinks in hand, listening to local singer Juliana Finch. The couple next to me debated what to do about dinner: Without a reservation, the restaurant couldn’t seat them in the dining room until 9:30. As dusk fell, Canoe’s rooftop sign lit up as bright as a 1930s theater marquee, and the river darkened to a rolling glimmer.

It’s hard to picture this pastoral stretch submerged under muddy, rushing water. On September 21 last year, during the worst of the floods that did an estimated $500 million worth of damage to the metro area, the Chattahoochee swelled and engulfed Canoe in six feet of overflow. It decimated the building’s interior, though staffers pitched in to help revive the restaurant in a remarkably quick two months.

“Over the years, the landscape had flooded from time to time. It was more of a nuisance than anything else,” said general manager Vincent Palermo in a phone interview. “After last year’s events, we were visited by representatives from the National Weather Service. They told us this was something that happened once every 200 or 300 years, which is one of the reasons we chose to reopen.”

At this point, a first-time customer could walk into Canoe and never sense what happened. The space has been gently updated with fresh carpet patterns and fabrics that line booths, but it retains the same clubby rusticity (exposed brick, wrought iron vines, a handsome copper hood over the semi-open kitchen, dusky lighting) that regulars embrace. And the restaurant, which opened in 1995, has cultivated a moneyed core of loyalists who keep the place booked. Given that a tent erected for special events was packed with revelers during each of my meals, and that the garden is a magnet for outdoor wedding receptions, I’d say Canoe is one of the few truly recession-proof restaurants in Atlanta.

Carvel Grant Gould, who has been executive chef since 2005, understands her audience. She maintains some of the restaurant’s long-standing idiosyncrasies while also subtly pushing the cooking in up-to-date directions. The menu is wordy, with ingredient-heavy descriptions that hearken back to the nineties, when New American restaurants delighted in verbiage detailing every overwrought dish.

Just as importantly, her kitchen consistently produces model versions of modern classics. Smoked salmon with potato cake and goat cheese is one played-out combo. Yet the potato cake is so crisp and lacy, it offers seductive, irresistible contrast to the salmon and the slick of whipped goat cheese painted across the bottom of the plate.

Same deal with a beet and goat cheese salad: It arrives in a precise circle, the goat cheese cradling morsels of red and golden beets that have the right toothy texture. Walnuts and dots of basil oil add understated spark. Both molten sheep’s milk cheese and not-too-sweet cranberry-pecan vinaigrette bring entertaining new dimensions to an otherwise basic, bacon-spiked spinach salad.

Fusion is a trend that’s deader than Bill Compton on HBO’s True Blood, so let’s just say that Gould likes to slip Asian nuances into her largely American-European compositions, and she does it effectively. She adds the distinctive pucker of yuzu, the Japanese citrus, to salmon ceviche with cilantro and cucumber, as well as to specials such as a fluffy, meaty crab fritter. Barbecued quail with star anise–scented boiled peanuts and collards zigzagged with East-West flavors (specifically, China and the American South), but the skin needed to be way crispier, and those peanuts could have been more aggressively spiced.

Occasionally, Gould lures you in with an embellishment that impacts the dish less than you expect, but the results are wonderful nonetheless. Foie gras sausage accompanies chile-glazed duck, and though the sausage lacks the liver’s come-hither unctuousness, a canny play of textures and bold flavors still makes it a successful entree. Chocolate vinegar is an intriguing addition to a slow-roasted short rib; I couldn’t detect a specific chocolate note, but the undercurrent of vinegar nicely brightened the slab of beef and the cabbage on which it was served.

Such a whirligig of flavors spinning through one menu can make wine pairings a challenge, but if you let wine director Matt Bradford have some fun, he’ll deliver on a bottle that bridges the disparities. (And I’m happy to see the wine list moving toward more diverse, less strictly American options.) Bradford is in demand when he’s working the room, but he’s worth the wait: The service staff, though thoroughly professional and knowledgeable about the food, could use a bit more education in the vino department.

They know their desserts, however, and they’re adept at talking you into ordering more than one. You won’t regret the coercion. Thomas Numprasong, one of the city’s unsung pastry talents, incorporates the kind of wit into his creations that makes them a genuine finale. Pray he’s made his buttered popcorn ice cream with homemade Cracker Jacks the night you visit. His chocolate and caramel “Grotto” begins as a dome of chocolate, but crack the brittle shell and out flows sexy salted caramel. “Whiskied Chattahoochee Mud,” a gossamer mousse pie with espresso-scented dark chocolate and Irish cream, proves that the restaurant and its staff haven’t lost their sense of humor, despite the trials of the last year. Here’s hoping this is the only kind of mud that ever sees the inside of Canoe again. —Bill Addison

Photograph by Alex Martinez. This review originally appeared in our June 2010 issue. 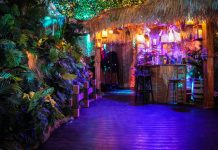 Fly off to Neverland, drinks in hand, at this Old Vinings Inn pop-up