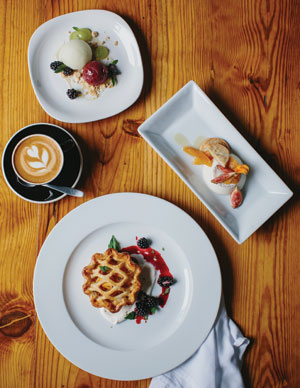 Who is Georgia’s most enterprising chef? I’d say Hugh Acheson, whose career has proliferated faster than a zucchini patch over the last two years. In April 2011 Acheson, who’d opened Empire State South in Midtown eight months earlier, appeared on Bravo TV’s Top Chef Masters, only to be voted off in the first episode after a salty scallop debacle. But when another contestant dropped out, Acheson returned, later winning his first challenge by whipping up fried crickets offset with a carrot puree. (Ah, reality television.) His candid snark and fluid facial expressions, amplified by a unibrow that would awe Frida Kahlo, enthralled the show’s producers: They quickly offered him a gig as a series judge on their lead ship Top Chef.

That same year, Acheson released his first cookbook, A New Turn in the South. It earned him one of two James Beard Foundation Awards the following May, when he also tied with Restaurant Eugene’s Linton Hopkins for the Best Chef: Southeast honors. He recently partnered with Live Nation to introduce healthier concession foods like veggie burgers and rice bowls to its venues. And next summer, he’s opening a restaurant in Savannah called the Florence, which will intermingle Southern and Italian cuisines.

But as frequently as the national press connects Acheson with Atlanta, the roots of his success were planted thirteen years ago and seventy miles away with his first venture, Five & Ten, in Athens. A native of Ottawa, Canada, Acheson moved to Georgia in the late nineties with his wife, Mary, who was born in Athens. He left briefly to be the sous chef of Gary Danko, San Francisco’s California-French showpiece, before returning to open his own place in 2000.

Five & Ten married college-town comfy—soft lights, two cozily cramped dining rooms, pressed-tin ceilings—with urbane food. Acheson never wanted his style of cooking too rigidly defined. He dipped into the Southern lexicon with dishes like catfish over grits and tomato chutney or the restaurant’s signature Frogmore stew, a Lowcountry soother with plump Georgia shrimp, andouille sausage, fingerling potatoes, and a fetching stump of corn on the cob, united in tomato broth. He was on the forefront of pork-belly mania: I ate bacony slivers plated with lentils and arugula from his kitchen in 2005. Yet for inspiration he’d also look to France, Mexico, or, most memorably, Italy, perhaps pairing gnocchi with braised lamb in a sauce of tomato and pancetta.

Five & Ten landed Athens on the country’s culinary radar, and the restaurant only improved as the years rolled by. In 2007, before he branched out to Atlanta with Empire State South, Acheson opened the National, a Mediterranean-themed restaurant run by chef Peter Dale (who had worked for Acheson for years), and a boutique booze shop, Gosford Wine (now closed). But Five & Ten remained the heart of Acheson’s growing coterie.

Last year he decided his eldest was due for a makeover. He found a Colonial Revival–style bungalow with a columned front porch, built in 1913 by prominent Athens architect Fred Orr. It sits less than a mile from the restaurant’s first site, with room for about twenty-five more seats. (With no takers to buy the original Lumpkin Street location, Acheson will open a Mexican restaurant there next year.) In the new space, Acheson knocked out walls between the warren of rooms, built a two-story kitchen behind the restaurant, and finished the basement, adding offices and wine storage. He even installed two-way traffic lights to navigate the narrow driveway that leads to the back parking lot.

The remade Five & Ten opened in July, and it can take longtime patrons a moment to adjust. While the old space reveled in a youthful funkiness, this one oozes mature, Southern gentility. Walk through the front door and into a foyer with freshly polished hardwoods and a crystal chandelier. To the left, find a handsome bar with a zinc countertop and tall barstools with leather seats. Beyond that is a coffee nook, the trim painted mossy green around multipaned windows and one wall covered with flowery paper; this corner opens during the day and also serves tartines (open-faced sandwiches) draped with tempting proteins like coffee-cured salmon and Benton’s country ham.

But not everything has changed. I recognized several servers who have been with Acheson since the restaurant’s earliest days. And the menu picks up right where it left off, with “snackies” like pimento cheese studded with candied bacon and boiled peanut hummus—both well known to Empire State South habitues—and appetizers and mains that flow graciously with the seasons without making a fuss about locavore this or farm-to-table that. Kyle Jacovino, an Empire State alum, leads the kitchen, collaborating with Acheson. (“I have embraced the notion that I have more and more become a restaurateur who guides chefs,” Acheson said on a call from New York.)

But I still detect Acheson’s sensibilities as a chef more strongly here than at his other restaurants. An elegant, warm potato salad speaks to his French culinary background: Coins of spuds scatter over sauce gribiche—essentially a gussied-up mayonnaise with capers and herbs—dotted with baby celery, carefully plucked parsley leaves, and spoonfuls of pickled mustard seeds. But the love of his adopted home is more palpable than ever. He pairs trout or vermilion snapper with rice middlins (the broken pieces that cook to a risotto-like consistency) from South Carolina’s Anson Mills; folds whipped cream, Tybee Island shrimp, and edible spruce tips (a foraged ingredient du jour) into corn soup; and dabbles in upscale barbecue with tender-taut pork ribs glazed with sorghum and crowned with a slaw of shaved turnips and radish. I had only one minor disappointment during two recent meals: a special of fried sweetbreads in soggy and underseasoned batter. I know the kitchen can do better; when I had sauteed sweetbreads over Carolina Gold rice at Five & Ten in May, shortly before the move, they arrived sublimely crisp on the outside and molten inside.

Desserts, made by new pastry chef Mike Sutton, were the most luscious they’ve ever been—an almost bittersweet reminder of how many restaurants treat sweets as an afterthought rather than a finale you’ll talk about all the way home. The buttery crust surrounding basil-peach pie melted on the tongue nearly as quickly as bourbon-peach ice cream and blackberry sherbet (ordered individually), both served at precise temperatures for maximum dreaminess.

Five & Ten for many years has been the answer to several questions I regularly field: where to eat memorably in Athens, where to head from Atlanta for an out-of-town dining adventure, where to trace the evolution of modern Southern cooking. The shift to its genial new setting only underscores its worth. It remains Acheson’s finest achievement and is, more than ever, a true destination.