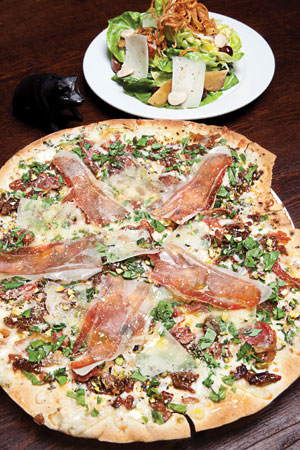 Federico Castellucci III understands hospitality. He appears at our table moments after we’re seated at his Decatur restaurant, the Iberian Pig. Wearing glasses with thick but modish black rims, he looks like an olive-skinned Clark Kent—and radiates that character’s earnestness, too. “Folks, thanks for stopping in,” he begins, smiling and extending his arms. “I’m a fifth-generation restaurateur. My family has been in this business for a hundred years. So if I’m not doing something right, there’s definitely something wrong.”

Castellucci delivers variations of his greeting to first-time customers over and over, and his enthusiasm never cracks. It’s a talent he learned from his father, Federico Castellucci II, who began his restaurant career in Providence, Rhode Island, moved to Georgia and costarted the Roasted Garlic in Alpharetta in 1998, then opened the first Sugo (there are now three) in Roswell in 2003. Family-friendly Sugo serves oversize portions of Greek and Italian dishes that match the elder Castellucci’s boundless personality: His ebullient salutations and colorful menu soliloquies should be studied at restaurant management courses.

Though the Iberian Pig is primarily the operation of Castellucci III and his sister, Stephanie, their father could be found on-site in its early weeks, his graciousness still unflagging. He’d wander the dining room, peer over his glasses paternally, and ask in his Brooklyn-esque accent, “Are you happy? Is there anything else we can bring for you?”

Their brand of conviviality builds immediate rapport with diners, who unwind in the mustard-colored room with floor-to-ceiling drapes. These are times that reward generosity of spirit. The place has done steady business since opening in October, bringing needed verve to the restaurant row on the south edge of Decatur Square.

This is the family’s first attempt at realms beyond the red-sauce bounty of their other establishments. Head bartender Thomas Jhun rides the cocktail craze capably with a smart list of old-school standards and signature variations on classics. He’s particularly adept at mixing absinthe-laced drinks such as Sazerac and Corpse Reviver No. Two, and his “550 Madison Ave.” with rye whiskey, vermouth, and brandied cherry syrup has the right hook of a Manhattan, but with a kiss of Southern sweetness. I’d gladly sip any of these at the long, handsome bar while devouring the restaurant’s thick burger topped with bacon-onion relish and tangy Mahon cheese.

Other options require some mental adjustment. During his spiel, the younger Castellucci defines the menu’s theme as “modern Spanish,” and he’s quick to point out that the kitchen takes liberties by employing “unique American twists.”

That understates the approach. Many of the dishes include an over-the-top fusion of ingredients that contradicts the inherent simplicity of Spanish cuisine. And in several cases, the owners repurpose Sugo’s Italian and Greek recipes and swap in Spanish ingredients to fit the premise of their new venture: crunchy potatoes, baked and stuffed calamari, and even a permutation of Sugo’s signature date-sweetened meatballs, rechristened here as “albondigas.”

Certainly, these cuisines share close affinities, but the cooking is more comfy-creamy Italian than direct, robust Spanish—more Roberto Benigni than Pedro Almodovar. Spain is currently a global inspiration for creativity and transcendent ingredients. I wish the Iberian Pig explored bolder frontiers and didn’t recycle so many ideas.

But if you’re willing to embrace the Castellucci ideology of busy, feel-good, in-the-vicinity-but-not-really Spanish food, you’ll discover some endearing dishes. The ensalada de Marcona plunges you into the aesthetic: Butter lettuce is scattered with Marcona almonds, caramelized parsnips, shaved manchego, slivers of chorizo, crispy shallots, and brandied cherries dressed in a champagne vinaigrette. It never becomes monotonous, that’s for sure. Ditto the cocas—pizzalike constructs on crackly Sardinian-style flatbread that come in variations such as the “Meat,” with Serrano ham, arugula, caramelized onions, manchego, and pistachios arranged carefully over the surface.

“My God, they served you the entire pork tenderloin,” said a tablemate when my entree arrived during one visit. Yes, the Castelluccis specialize in generous portions at affordable prices. (The tenderloin costs $18.) I’ve never seen a plate more closely resemble a Jackson Pollock at his splattering heights. Lines of cherry-Rioja reduction zigzag across the pork, and fried shallots, spiced walnuts, chopped piquillo peppers, and cherries crisscross on top. Underneath all this, the pork is juicy, and the flavors do mesh.

But ordering an uncomplicated dish or two can be a relief. The top of the menu lists charcuterie and cheese. The restaurant is proud that it offers jamón Ibérico, a ham cured from Spanish black-footed pigs. Several grades of the ham exist, and if this isn’t the most exquisite caliber, it still has a lovely earthiness. Too bad the restaurant piles it on the plate in ragged shards rather than serving thick, elegantly long slices as they do in Europe. If you want to pair it with a cheese, try idiazabal, an aged sheep’s-milk gem with a faint smokiness.

After those morsels, consider the barbecued octopus from the tapas selections. It is simmered, char-grilled, and finally painted with a vinegary tomato sauce that blessedly avoids being too sugary. The most straightforward-tasting entree, other than the burger, is the halibut. Despite a flurry of accompaniments—a grilled corn crema sauce, more caramelized parsnips and fried shallots, and a tuft of arugula salad—somehow the fish’s gentle flavor stays in the forefront.

If you go for the excellent burger, request a $4 tapa of crunchy potatoes, which I prefer over the greasy eggplant fries that typically come on the side. Pass on dessert: The churros, for example, need to be tweaked so that the doughnuts’ interiors are silkier and contrast more effectively with the crunchy exterior. Have another cocktail instead.

Beyond the food’s unevenness, the Iberian Pig clicks: The servers have warmth and hustle, the wine list explores Spain commendably and includes several novel options by the glass and half glass (try the Capafons-Osso Vessants, a spicy red blend), and the room flatters the buzzing crowd with shadowy, honeyed lighting. The next generation of Castellucci entrepreneurialism looks promising. For its next business, though, maybe it can look beyond the family fold for a simpler taste of the Mediterranean. —Bill Addison

Photograph by Alex Martinez. This review originally appeared in our December 2009 issue.