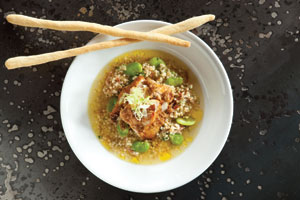 For the first nine months of its existence, La Pietra Cucina was a literal boîte—a box of a restaurant—squashed into a back room of the deserted space in the Pershing Point office building where MidCity Cuisine played out its few coquettish years. The setup, in one of MidCity’s old dining rooms, was meant to be a short-term starting point for La Pietra Cucina while the entire space underwent renovation. At first, the taped-up signs that announced the Italian newcomer were vague, leading customers to walk through the graveyard of MidCity’s dining room, past once-jolly striped banquettes and an abandoned bar, toward a beckoning light at the far end of the expanse. It felt both disorienting and juicily clandestine.

La Pietra Cucina opened in August 2008, with intentions to move into its newly spruced-up digs by midfall. But construction was pushed further and further back, and the temporariness of that odd back room took on an increasing air of permanency as more people discovered chef Bruce Logue’s confident, idiosyncratic style of Italian cooking.

An Atlanta native, Logue has a resume that includes culinary studies with Slow Food in Italy, a gig as sous chef at Mario Batali’s famed Babbo in New York, and, immediately before returning home, the executive chef position at Vivace in San Diego’s Four Seasons resort. He gathered his experiences into a menu that toggles between contemporary and traditional dishes: meaty nibbles, crudo (the Italian version of sashimi, popularized at Batali’s Manhattan restaurant, Esca), and salads with poise; soulful, house-made pasta with bold sauces; and Cal-Ital meat and seafood entrees rife with seasonally current vegetables.

I grew to love eating Logue’s food in that tabula rasa of a room. A bowl of linguine mustered all the personality the restaurant really needed. And with no atmospheric distractions, the visual stimulus relied on the chummy vibe that blossomed when the room filled to capacity. Sure, it looked a bit like a corporate meeting space: Perhaps that’s why it gained momentum as a power-lunch destination. Even during recessionary times, Atlanta restaurateurs scramble to glitz out their newest ventures. I savored La Pietra’s refreshing blankness.

It was never meant to last. The restaurant finally closed for its long-awaited overhaul for three weeks in May. Given the rock-and-roll energy behind much of Logue’s cooking, I expected the makeover to be light, airy, and fresh. Boy, did I guess wrong. It turned out country-club stodgy, with a touch of the absurd. MidCity’s center-stage bar remains, but the enormous room’s perimeters have been colored a dusky rose, with hardwood floors darkening the scene even more. The banquettes are now gray. A wall conceals the previously open kitchen, with a painting of a horse hanging roughly where the salad station was once in view. To the left of the bar sits a row of tables, each outfitted with extravagant, high-backed chairs straight out of the Mad Hatter’s tea party.

The waitstaff grew to accommodate the expansion, and the restaurant hired some true characters. One server’s theatrical false eyelashes were so spellbinding, even behind her Lisa Loeb glasses, that we had trouble focusing while she recited the specials. A food runner bowed with peculiar solicitude every time he dropped off plates, then ambled away singing to himself. These folks definitely offset the space’s formality. In the future, though, I’ll always make it a point to seek out the old-guard servers. You can spot them easily—they stand out as more grounded and self-assured.

But all the dubious changes recede in the glow of Logue’s food, which hasn’t lost any of its spunk or care in the transition. The dishes here may not be designed as small plates, but this kind of cooking is inherently meant for sharing. Begin with a La Pietra signature: squiggles of prosciutto di Parma draped over four triangles of flatbread, served with freshly made ricotta as well as pineapple mostarda, a sweet and piquant conserve spiked with yellow mustard seeds. To explore Logue’s range, I strongly suggest making certain the rest of your meal includes at least one item from each of the following categories: cold antipasti, warm antipasti, pastas (that’s the toughest decision you’ll make), and secondi, or main courses. Remember, you’re sharing.

Though smattered with perennials, much of his menu remains in continual flux. Columbia River salmon was in season during a visit in late May, and Logue offered a creation that he labeled a crudo but was technically more a tartare. The fish was chopped into a silky mince and blended with spicy extra virgin olive oil—a double helping of healthy fats to wallow in without guilt. Shaved fennel, olives, and tangerines lightened the oily factor. Stay sharp when the servers discuss salad specials such as roasted baby artichokes over escarole perfumed with mint and heightened by slivers of ricotta salata.

Want a taste of Logue’s time under Batali’s employment? The tender rings of calamari united in a tomato broth with Vermentino (a Sardinian wine), toasted garlic, pine nuts, currants, and olives zap with the same bombastic concentration of flavors I remember at Babbo.

If you’re not overly hungry or aren’t in the mood to commit to a protracted meal, head directly to the pasta options. They convey the kitchen’s spirit most meaningfully, and in Italian-cuisine-challenged Atlanta, the combinations can be revelatory. Chitarra—a thick spaghetti-like noodle—stands up to the plucky duo of mussels and capers in a tomato broth. Fettuccinelike tagliatelle appears to be the teacher’s pet: It gets all the best of-the-moment ingredients coiled in its tangles.

In spring, the pasta cradled morel mushrooms and wild ramps with lots of butter and Parmigiano-Reggiano. Early summer called for squash blossoms and nearly melted orbs of robiola cheese. Exquisite. Beware the bucatini all’Amatriciana, however: Loaded with onions and guanciale (house-cured pork jowl), it has a funky barnyard note that dominates the whole dish.

After the pastas, the secondi often act as savory denouements: a modestly sized whole fish such as daurade or branzino divided among tablemates, dabbed with chunky lemon-marjoram jam; sliced flat iron steak with polenta; comforting roast chicken over fregola (tiny semolina pasta) dotted with speck ham. And desserts have actually improved since the changeover. Pistachio semifreddo flaunts a more luxurious smoothness, and the pretty fruit crostata—plum during my latest dinner—models a more delicate crust than at my final lunch in the old room.

There. I found one solid reason to bless the transformation. I’ll keep coming back for Logue’s inspiring cooking and trust I’ll hit upon others. —Bill Addison

Photo by Deborah Whitlaw Llewellyn. This review originally appeared in our August 2009 issue.