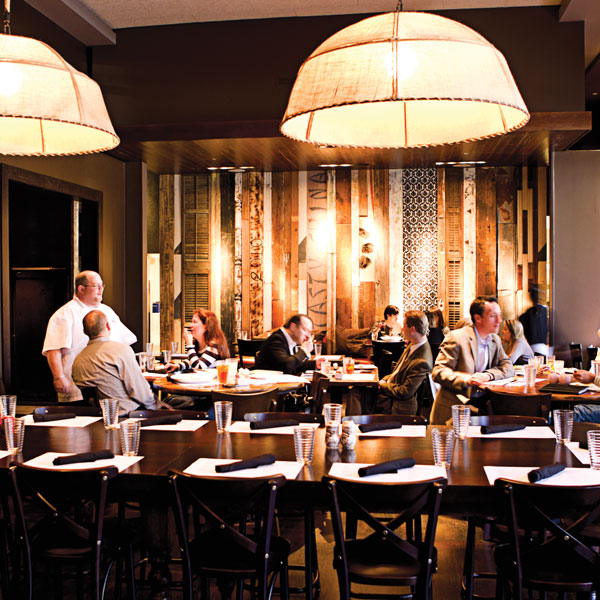 I dial the number for Local Three around noon on a Wednesday, hoping to snag a reservation for Friday night. “Let me guess,” I say to the woman who ansers. “You only have 4:30 or 11 p.m. available?” She laughs, her voice dissolving into the lunchtime din behind her. “You’re not far off. We have tables left at 5:30 or 10.” During these recent lean years in the Atlanta food scene, I’ve fallen out of the habit of calling ahead for dinner plans. This place is forcing me back into the routine. I settle for 6:15—the following Tuesday.
No matter when you show up, scents of butter and pork waft through the parking deck of the sedate Piazza on Paces office building that houses Local Three. You hear the distant rumble of a full restaurant as you pass the security desk on your way toward an oak door with deep grains at the end of an otherwise sterile hall.

Inside, it is crazed—the kind of rowdy busy that compels you to will a mental cocoon around your table to block out the whirlwind of noise and activity. Distraction is inevitable, though. You can’t help but survey the cross-generational crowd sipping complex-looking cocktails, beers in bulbous glasses, and bourbon doled out in flights. They’re gobbling pimento cheese, shelling boiled peanuts, and selecting their next slice of charcuterie off wooden platters as they lean in to hear one another.

Above their heads, on chocolate-colored walls, hang images of portly pigs by Tracy Hartley (his brand of folk art also enlivens Holeman and Finch Public House). Few merely drink at the bar; most request plates of chicken potpie or grilled flatiron steak alongside their glasses of Malbec.

And to think this location at the western edge of Buckhead had a reputation for being cursed. It’s difficult, given the honky-tonk makeover, to summon even a memory of Joël, the glittering, serious French brasserie that inaugurated the space in October 2001. Its James Beard award–winning chef, Joël Antunes, crafted dishes I still daydream about—foie gras terrine with butternut squash, roast veal tenderloin with sweet-and-sour rhubarb, mille-feuille layered with whiskey-scented pastry cream. But after an initial rush of commotion, the city never embraced Joël. Too chilly. Too formal. Those primary complaints begot other grievances: Too expensive. Too out of the way.
Local Three’s owners—Todd Mussman, Ryan Turner, and Chris Hall—went for warm and quirky, the exact opposite of Joël. And nothing, it seems, wins Atlantans over faster. Suddenly, the eight-minute drive up I-75 North from Midtown isn’t such a schlep. Mussman and Turner mastered amiable idiosyncrasy at their thriving Smyrna sandwich-shop-cum-American-bistro, Muss & Turner’s. The amigos peppered Local Three’s walls with kitsch and inside jokes (two velvet Elvis portraits, and another inspired by The Big Lebowski), but even if you don’t hero-worship “The Dude,” the odes to bromance are endearing.
In the last couple of months, the food has become endearing as well. When the restaurant opened in December, the energy was infectious, but the cooking was all over the place. I sat at the bar during my first meal—because I had naively shown up without a reservation—and the woman next to me studied what I was eating and asked, “Do we have the same dish?” We’d both ordered spaghetti carbonara jazzed up with sea urchin and peekytoe crab. Her bowl so brimmed with sauce that her noodles needed life jackets. My spaghetti, on the other hand, arrived nearly sauceless—and tasteless. It was an extraordinary display of kitchen inconsistency.
Such drastic misfires are well behind the restaurant now. Hall, who serves as executive chef, orchestrates a menu full of bombastic flavors, American chutzpah, and wacky pop culture references. “Shhhh, I’m Hunting . . . ” was the name of a recent rabbit special; score one for Elmer Fudd.

The enthusiastic staff used to give long speeches about the food, but they’ve happily trimmed their intros. These days, they greet you sincerely, then quickly steer you to munchies such as gently crispy hushpuppies fried in duck fat or smooth, properly room-temperature pimento cheese with pickles and flatbread. Ease into the Local Three mind-set with a Belgian ale or one of sixty bourbons available by the glass. (Sixty bourbons! I envy beverage director Matthew Lathan’s job.)

Mussman produces the in-house charcuterie program, goofily labeled “The Notorious P.I.G.,” and he’s got the touch. He executes silky standards (mortadella, finocchiona) as well as funkier specimens like corned beef tongue and porchetta di testa—known to Southerners as head cheese.

With appetizers, the cooking segues into more sophisticated combinations. Tender pieces of butter-poached lobster mingle with carrot, ginger, and tarragon, which all freestyle around the lobster’s flavor, adding dimension to its sweetness. Gossamer gnocchi nestled alongside are simply a textural bonus. Braised lamb shoulder evokes Middle Eastern cuisine with its accompanying bed of spiced lentils and swirl of yogurt, the whole melting together into creamy, heady bites.
Hall may dabble in refined flavors, but he never loses sight of the restaurant’s fundamental goal—to serve as an accessible neighborhood hangout. Entrees, then, cover the gamut of tastes. The changing list of daily specials tends toward the experimental. The aforementioned rabbit was slow-roasted and tossed with rolled cavatelli pasta and herbaceous ricotta, adding up to a bowl of soulful, multifaceted yum. Chesapeake Bay wild striped bass lay atop a ragout of slow-roasted beef and cranberry beans with rapini on the side. Strange, and yet this new frontier of surf-and-turf worked. The freshness of the fish contrasted smartly with the simmered depth of the ragout.

But if you don’t crave avant-garde or intellectual? There’s a lilting chicken potpie with a buttery biscuit topping, a pan-seared trout with Brussels sprouts and apples (a version of that is served at brunch, where you traipse buffet-style through the hotel-sized kitchen commissioned by Joël Antunes), and “The McDowell,” a double-pattied, fast-food burger riff cribbed from Coming to America.

The cooking still needs fine-tuning here and there. Boiled peanuts came out inedibly salty one evening. I seem to have bad karma with noodles here: Crab spaghettini with garlic, preserved crab, and pecorino was also over-salted, and when we sent it back, the kitchen’s misguided solution was to make a version with no cheese at all, which rendered the jumble flat and bland.
And I’m still waiting for pastry chef Gary Scarborough to find his groove. A towering vanilla and orange float didn’t have enough tang and complexity to keep me burrowing past its pyramid of whipped cream. And a naked slice of banana bread atop banana crème brûlée made for an awkward combination. Maybe he’ll be more inspired by produce in spring?

Minor quibbles aside, Local Three triumphs as the latest template for success in Atlanta’s culinary circles. The lesson: Embrace your eccentricities and emphasize relaxed, boisterous hospitality, and the city will respond. Kudos to Hall, Mussman, and Turner for turning a perceived curse into a tangible blessing. —Bill Addison

Photograph by Alex Martinez. This review originally appeared in our April 2011 issue.