Concentrics restaurants are never boring. The powerful, Atlanta-based group responsible for One Midtown Kitchen (recently closed after 16 years), Two Urban Licks (as busy as ever), Parish, Tap, Molly B’s, and the latest, Bully Boy, knows how to have fun on a plate. The food world, in its preoccupation with all things young and weird, sometimes dismisses Concentrics founder and owner Bob Amick as a concept man, a popularizer of trends. I think of him as a restless innovator. For example, Amick stumbled on the BeltLine almost by accident and became the first restaurateur to open along what was then a weed-infested corridor.

Amick, who is nearing 70, and his long-time business partner, Todd Rushing, 15 years his junior, have opened a staggering number of restaurants: 47 in Atlanta and 100 coast to coast, either company-owned or created and managed for other operators. Both men have been married forever and have three children each as well as grandchildren, and they’re at a point where they want their business to tap into their food memories. For this most recent venture, those memories include beach shacks up and down the East Coast and a steakhouse on the Jersey side of the George Washington Bridge called Bully Boy. Amick, who grew up on the West Point campus in a military family, frequently ate there as a child. It was his parents’ favorite restaurant, and the name always stuck with him.

In 1974, Amick was hired as a bartender at the Pleasant Peasant, then Atlanta’s hot, new, semi-French restaurant. He quickly learned that there’s more to the restaurant business than putting food on the table and went on to become a partner who expanded the company from one to 42 locations. In 1987, Amick hired Rushing (whose parents were Amick’s next-door neighbors) at Mick’s, the creative diner he’d helped bring to life. The two men share the conviction that most diners crave a mix of drama, originality, and familiarity.

Two chefs share cooking duties at Bully Boy: Justin Dixon, who formerly worked for Concentrics as a sous chef at the Spence, and Michael Bertozzi, who created the menu and whose Peruvian roots inform some of the restaurant’s eclectic dishes. Bertozzi also heads the kitchen at Two Urban Licks next door.

The menu is divided into 20 or so small to medium-large plates and three large-format “feasts.” Among the latter is the showstopping North Carolina poulet rouge. Boned, seared, and roasted, it rests on fragrant Carolina Gold rice amid house-pickled vegetables, smoked mushrooms, and drizzling sauces and comes with whole leaves of Bibb lettuce and steamed buns to create your own mini-sandwiches. It’s a stunning value at $22 for a half bird, $36 for a whole. The lobster frites (tender flesh extracted from the shell and heaped on the half shell next to a mound of fries) occupies the more decadent end of the other portion of the menu, while the smoked bluefish dip with flaky sourdough crackers, the Virginia oyster sliders, and the Jonah crab rolls are more down-to-earth options.

On the whole, though, the food is well sourced and inventive. The patty melt is made with rabbit; the New England clam chowder carbonara is served on linguine with guanciale, farm egg, and croutons; and the one-minute steak, a barely seared slice of filet, comes with a farm egg and a soupçon of truffle cream on top of brioche.

There isn’t much of a dessert program, but the housemade Kit Kat, a cult item from One Midtown Kitchen, has landed at Bully Boy.

Amick’s middle son, Justin, an advanced sommelier who has restaurants of his own, has put together an entertaining wine list with varietals such as a flinty, refreshing vidiano from Crete and a slightly effervescent Hondarrabi from Spain’s Basque country. The cocktail list is a quirky complement to the menu and includes an Adult Cream Soda (vanilla vodka, coconut, tangerine) and a mezcal drink with pineapple, tomato, and chili.

The building, a former metal shop conveniently located steps away from Two Urban Licks, received its first upgrade when it became Nexto, Concentrics’s short-lived ramen shop. Some additional changes have helped further transform what essentially was a shed with corrugated metal walls into a comfortable industrial space with enormous windows. Tables are topped with cork, walls are paneled with oak, an oversized pendant casts golden light over the community table, and a sleek bar wraps around the tight, efficient, open kitchen. The artwork—including a nude by Atlanta artist Myott Williams and a triptych of a cow bought in Paris—and ample greenery add stylish warmth.

Dramatic but relaxed, Bully Boy is conceptually broad enough to let you build the experience you wish—whether that experience is oyster sliders and bluefish dip or lobster on the half shell and prime porterhouse. Some of the dishes can use a little more finesse, and the kitchen is occasionally inconsistent, but the level of creativity you’ll find in the food—and the amount of fun—make up for it. 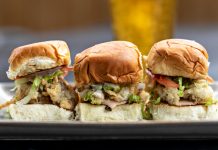 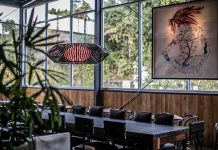