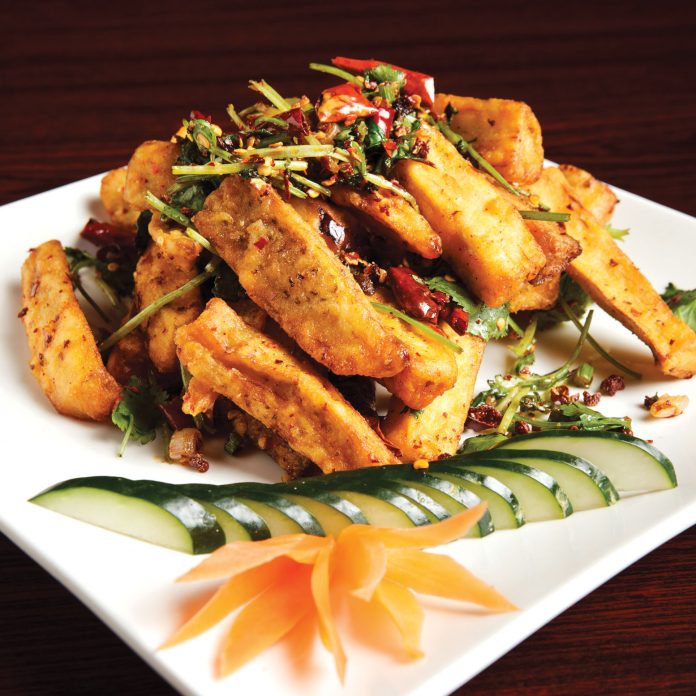 When I think of Peter Cheng, I imagine him in his tall, white chef’s hat, walking down the road alone like Bill Bixby in the old Incredible Hulk series, trailed by sad piano music as he moves from one kitchen to the next. Cheng, who last December set up shop in Atlanta for the second time in five years, has made inscrutability as much of a trademark as his arousing, incendiary Szechuan dishes.

His story is fabled among the adherents he’s attracted over the last six years. A native of Wuhan, a city in China’s Hubei province west of Shanghai, he moved to this country to cook at the Chinese embassy in Washington, D.C., early last decade, and in 2005 he became head chef in restaurants around the capital. He bewitched diners with the chiles, cumin, and tingly Szechuan peppercorns he uses to heighten precisely braised, stir-fried, and deep-fried meats and vegetables. The novelty and wizardly talent displayed in these dishes inspired widespread obsession rarely devoted to Chinese chefs in the U.S., much less to a press-shy one.

His MO soon emerged: He stayed at restaurants less than a year, in some cases just a few months, before leaving without hint or explanation.

His wandering only fueled the public’s fascination. After D.C., he showed up at Marietta’s Tasty China in 2006, giving Cobb County an unexpected boost in culinary fame when national online chatter blew up about his whereabouts. Locals began speaking in tongues over wonton in red chili oil, fish and tofu strewn with diced peppers, battered sticks of fried eggplant, and beef and lamb spackled with spices. Then he left, on to Tennessee and then Virginia.

Around the time last spring that the Oxford American and the New Yorker ran stories about him in the same month, Cheng turned up again at Tasty China. Rumors spread that he was truly planting roots in the Atlanta area, partnering with Tasty China owner Da He Yang on a Sandy Springs restaurant to bear Cheng’s name.

When it finally opened in December, I was beyond eager. I’d been absent from Atlanta during the first coming of Cheng, and though I loved the fiery Szechuan surprises still served at Tasty China, I had longed to taste them crafted by the master’s hands. Cheng held a media dinner (which I didn’t attend) and granted preopening interviews—firsts for him and, it seems, his way of signaling that he’s genuinely intent on staying put.

Cheng won over his devotees while cooking in scruffy digs, and the new location is barely more appealing than tight quarters in a strip mall. He chose an awkwardly shaped, faux-chalet building that looks about the same as when it housed Olives Waterside, a suburban singles hangout known for its fruity martinis and dueling pianos on the weekend.

Service doesn’t always mitigate the space’s ungainliness, either: This crew needs serious training. They are generally quick with a smile, but most of them seem as flustered and intimidated by the seven-page menu as the diners. And this food requires guidance. The waitstaff does seem to grasp that the majority of us aren’t here for insipid Chinese American dishes, though chicken with broccoli and its ilk are available if you want them. They’ll steer you toward easy-to-love appetizers: plump, pork-filled soup dumplings; Scallion Bubble Pancake, two balloons of deep-fried dough similar to the ones served in Indian restaurants; and Pan-Fried Three Flavors, chopped pork and mushrooms darkened by soy sauce and layered with sticky rice and a thin stratum of egg. Some servers hurry to suggest the Crystal Shrimp, a glossy and very mild toss of shrimp with asparagus and red bell peppers. When it comes to sorting through the more esoteric dishes, though, you’re often on your own.

My best advice? Strive for variety to appreciate Cheng’s range and depth. Order more than his famous appetizers and entrees labeled “hot and numbing” (the effect Szechuan peppercorns inflict on lips and taste buds). Start with dry-fried eggplant. It arrives as a jumble of beige rectangles, crusted with crushed chiles and peppercorns and snarled among cilantro stems. The exterior of each chunk crunches satisfyingly; the interior gushes creamy, molten eggplant. The spice whirs in the mouth without obliterating the other flavors. Contrast that with smoked chicken in mustard oil under the cold appetizer options. The orange-tinted dressing that coats slices of chicken and spears of zucchini adds piquant verve but also provides a cooling element. Also try the tofu skins in chili oil. It may not sound appealing, but the tofu skins resemble fettuccine in their texture, and the chili oil isn’t overly torrid—it lends an appropriate middle-of-the-road spice to the mix.
If I could order only one entree, it would be the Spicy Fragrant Duck from under the Chef Specialties list. Duck’s gentle gaminess makes an ideal foil to chiles and Chinese five-spice, and these aromatic morsels are proof that Chinese cooks turn deep-frying into an art form. Alongside, ask for the fish with pickled peppers and sour cabbage in a milky broth. Its pucker quells the flames and resets the palate. I felt divided about the popular Peter Lamb Chops. The warming presence of cumin, used in a way that coaxes out the lamb’s sweetness, set my mind adrift on the ancient sea routes that carried the spice between Africa, the Middle East, and Asia. But the floppy texture of the meat on the chops broke the reverie.
Interestingly, if you’ve been to Tasty China, the burn levels can be comparatively modest here. I ordered the Hot and Numbing Combination in Hot Pot, and you’d think that anything mentioning the word hot in its title twice would be a pyromaniac’s Shangri-la. I’m not saying it doesn’t scorch a bit, but the gurgling brew of beef, chicken, fish, shrimp, and glass noodles in red chili oil doesn’t blaze nearly as high as the version at Tasty China. (Hotheads can ask for the dish to be spicier.) The variety of ingredients provided most of the excitement; the braised fish with tofu in chili oil, a dish I’ve read other food writers rhapsodize over, seemed dull by comparison. Ditto the fish and tofu from the specials list, covered with diced hot peppers in a flat-tasting broth. They lacked the layers of flavor that can make Szechuan cooking so intriguing.
Their halfhearted quality makes me wonder: Has Cheng grown bored with some of his signatures? The benefit of wandering from place to place is that you’re always winning over a new audience. Staying put means cultivating fulfillment from repetition and consistency. I’m not convinced Cheng will stick around for the long haul, which gives this mandate some urgency: Go form your own opinions about the cooking of this perplexing, mercurial chef while you can. —Bill Addison
Tasty China II
RATING **
6450 Powers Ferry Road, Sandy Springs
678-766-8765
petertasty2.com
HOURS Sunday–Thursday 11 a.m.–10 p.m., Friday–Saturday 11 a.m.–11 p.m.

Photograph by Christopher T. Martin. This review originally appeared in our March 2011 issue.