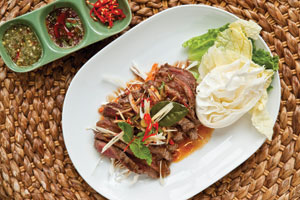 Thai cuisine, in its truest form, riles the senses. Be it a classic green curry or a jumble of shrimp tossed in a scorching wok with fermented shoots and buds of plants mostly foreign to Western palates, the aromas inundate before the first bite. Smells from the most pungent dishes may slightly repulse before the flavors enchant—the culinary equivalent of how destined lovers behave in a Shakespearean play. Garlic, herbs, chiles, and lime ripple over the taste buds. Coconut calms the heat in spicy preparations from the coastal south. Hearty sausages and salads from the rugged, mountainous north bolster appetites.

In Atlanta, exciting regional Thai food is scarce. Most of our numerous Thai restaurants serve the same generic menu: spring rolls, pad thai, tame curries with your choice of protein, entrees that strongly resemble Chinese stir-fries tweaked with a hint of Thai-style seasoning. Sure, these Americanized standards have their place, but there are such fertile worlds to explore beyond these limited glimpses.

And so a whisper of hope ran through the food community when it learned that a restaurant specializing in Bangkok street food was being opened by the Niyomkuls, the royal family of Atlanta Thai restaurants. Charlie and Nan Niyomkul run the lavish Nan Thai Fine Dining and its little sister, Tamarind Seed Bistro.

Tuk Tuk Thai Food Loft, the family’s new venture, is in the hands of daughter Dee Dee Niyomkul and her fiance, Thaddeus Keefe. Its location—on the third floor of the Brookwood Place shopping center in the space formerly occupied by Taurus, Gary Mennie’s glitzy riff on chophouses— feels at first like an improbable spot to sample Thai street food. One walks into the small lobby to find a real tuk tuk, the nickname for the auto-rickshaws that putter passengers around cities in Southeast Asia. Two elevators papered with black-and-white Thai characters lift diners to the restaurant. When the doors open, a hostess greets arrivals with a slight bow and presses her palms together in a wai, the gesture of welcome.

Pause to appreciate the sweeping silhouette of the city’s skyline out the window—such a rare sight in Atlanta restaurants. Frustratingly for guests, the little hostess corner is blessed with the most dazzling angle of the view. The dining room, stripped of Taurus’s glam ostentation, resembles a small amphitheater. Lights twinkle on the dark ceiling like constellations, and banquettes and tables have been arranged in a spare but elegant manner. When the restaurant fills to capacity on weekend nights, the space crackles with the kind of this-is-the-place-to-be energy that Atlantans crave. On a slow Tuesday night, the echo can make this a lonesome place to dine.

A few clever touches spark a Thai mind-set. The staff recently set up projectors that cast images of Bangkok’s street-food scene on the back wall. A quirky pageant of Thai snacks, resembling multishaped varieties of Chex Mix packed into bins, sits on display next to the semiopen kitchen.

What really jump-starts the lust for Thai flavors, though, is a dish called mieng kum. Order it while you peruse the rest of the menu. Spinach leaves, rounded like petals, cradle clusters of roasted peanuts, coconut, onion, bits of lime (rind and all), and slivered ginger, all bound by palm sugar melted into caramel. Shazam! Jolts of sweet, piquant, and earthy ricochet around the palate like an overactive cartoon character bouncing off walls. At long last, a taste of Thailand that departs from the multitudes.

Happily, there are more pleasures like the mieng kum to be discovered at Tuk Tuk. Niyomkul and Keefe have been planning this concept for years as a tribute to Niyomkul’s grandmother, who once worked as a street vendor in Bangkok. Niyomkul, who oversees Tuk Tuk’s kitchen, juggles a challenge typical for mainstream ethnic restaurants: How can she prepare dishes in a manner that appeals to diners unfamiliar with regional specialties while appeasing serious chowhounds who know these foods and long for aggressive Thai seasonings such as dried shrimp and fermented fish sauce?

She strides the middle path as best she can, and she often succeeds. The menu—divided into small plates, soups and salads, “Bangkok street noodles,” and big plates—is designed for sharing. For the more adventuresome, there are small plates such as hoy tod, a crisp pancake-omelet hybrid stuffed with mussels, sprouts, and scallions. The dish is prepared with a surer hand now than it was when the restaurant opened in December, and it’s an extra joy to eat mussels in a way other than steamed in white wine–cream broth. Thai beef jerky sounds intimidating, but it’s a plate of chewy sirloin strips with mild nuances of honey and soy sauce. You eat them using your fingers along with clumps of sticky rice. Two types of garlicky sausage in the style of northeastern Thai cuisine bring on slightly feistier spicing. Docile palates will appreciate the moist grilled pork skewers, arranged in rows and dangling from a metal contraption.

Larb kai—a common salad featuring chicken, roasted jasmine rice, and cabbage—has the heady thwack of fish sauce that I wish was used assertively in some of the more novel dishes. I miss it in the beef salad, which includes lemongrass and kaffir lime leaves but still comes off as lackluster. The same thing happens in the flat rice noodle dishes—one contains egg and Chinese broccoli and is prepared with your choice of chicken, beef, or pork. Sound familiar? The winner in the noodle department is ba-mee moo dang, a plate of egg noodles where rich barbecued pork plays off the refreshing astringency of yu choy, an Asian green.

When it comes to the bigger plates (all very sharable), seek out simplicity: soothing steamed chicken served with garlic rice and a bowl of chicken consommé to sip, grilled chicken with zingy papaya salad, and a whole grilled catfish perfumed by the herbaceous banana leaf in which it is wrapped.

And when the meal reaches dessert time, I want nothing more than a bowl of silky coconut ice cream. The restaurant also makes the Thai version of a snow cone, prepared on a display cart full of intriguing goodies that call to children from across the vast room. The snow cone is made with condensed milk, rose syrup, lotus seeds, palm seeds, taro, and red beans. Truthfully, I’m not a big fan of that flavor and texture combination. But it’s traditional to the culture, so I am awfully glad Tuk Tuk offers it. —Bill Addison

Photograph by Deborah Whitlaw Llewellyn. This review originally appeared in our April 2010 issue.