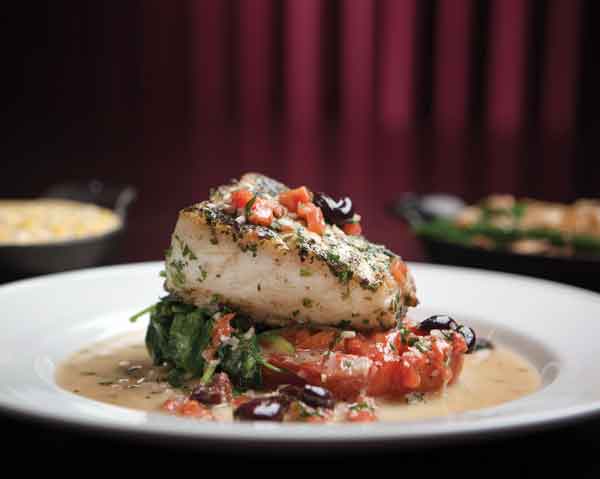 Our server at Viande Rouge in Johns Creek sidled up to tell us about the night’s desserts. We’d already polished off cosmopolitan throwbacks like escargot in puff pastry and an entree of Dover sole fillet, divided for us on a tableside cart, with a side of haricots verts amandine. Sweets followed the same retro route: peach Louie, a Georgia-themed variation on bananas Foster flambéed with bourbon and Schnapps, and—here were the magic words—chocolate or raspberry soufflés. “Raspberry, please,” I said.

I thought about the last time I’d had a raspberry soufflé in a restaurant. It was on a family vacation in San Francisco in 1988 at venerable Ernie’s, whose ornate dining room was captured in Hitchcock’s Vertigo. We chose Ernie’s because of its fame (in a commercial, it had secretly replaced the fine coffee it usually served with Folgers!), and the billowing soufflé for two, which my father and I shared, was the meal’s highlight.

Now the server at Viande Rouge set down an evenly risen stunner with a crusty top that handsomely circled the edge of the dish. He poked the center with a spoon and poured in crème anglaise, a traditional touch. The raspberry flavor was a tad sugary, but the creamy, weightless texture was impeccable.
Viande Rouge bills itself as a steakhouse with Gallic flair: The menu meanders through chophouse standards—eight cuts of steak, tomato salad with Roquefort, lobster bisque, six potato variations—but also slips in classics like boeuf bourguignon and duck a l’orange inspired by chef-owner Marc Sublette’s French grandmother. But really, at its heart, Viande Rouge is a Continental restaurant.
That’s probably not a term Sublette and co-owner Thomas Taylor would embrace. The Continental genre has been wiped clean from all but the dustiest corners of the national dining mind-set. Continental conjures memories of special-occasion palaces before the 1980s—before nouvelle cuisine and its low-fat sauces made from carrot juice, before the Southwestern craze, and certainly before California’s local, seasonal zeitgeist began to percolate throughout the country.

The Continental style, a mashup of French and Italian cuisines with other European influences, was derived from the opulent hotels of the early twentieth century. It translated into restaurants with lavish, baroque rooms; tableside service from unsmiling waiters who played with booze and flames; and meats and fish cosseted—or, more probably, drowned—in butter and cream. It eventually became synonymous with rote, monotonously rich food served by snooty staff in a stale setting. Many food critics, including me, have brandished the C-word as an insult for unoriginal, poorly executed cooking.

And yet I confess a soft spot for these florid dishes of yesteryear. I came of age, restaurant-wise, just before Continental restaurants began dying out, and I followed my dad’s lead when he ordered veal Oscar and Grand Marnier soufflés. I’ve craved beautifully rendered versions of these anachronisms over the years, and I wondered if I might find them at Viande Rouge, which opened in June, when I first walked through its doors.

Actually, I didn’t know what to expect at all a moment before that. The restaurant’s exterior is completely blacked out—an underground nightclub or an adult bookstore might hide on the other side. Instead, it opens into a swank room that resembles a midcentury Parisian speakeasy. Red does not adequately describe the fleur-de-lis wallpaper: It is Hester Prynne–scarlet. A sexy, tufted leather banquette sits opposite a comfortable bar. Customers dress like they’ve been yearning for a place in the suburbs where they can preen. Women wear cocktail dresses and sometimes sequins. Men wear slacks and freshly pressed designer shirts. It feels decidedly grown-up, which is the point: As with Trattoria One 41 next door, also run by Taylor and Sublette, Viande Rouge encourages a mature environment by allowing only guests eighteen and older.

Sublette worked previously for the Buckhead Life Restaurant Group. He makes use of his experience at Pricci for Trattoria One 41’s Italian menu, but for Viande Rouge he draws on his time as chef de cuisine at Buckhead Life’s defunct flagship Pano’s & Paul’s, the city’s finest Continental stalwart before it closed in 2009.

I most admire his dishes that exude understated, old-fashioned elegance. His cheese fondue is winey and correctly pungent with cheeses like Emmentaler, and he serves it simply, in a small crock, with sliced baguette and apple wedges. He marinates huge prawns and then grills them just enough, before they turn mealy, and serves them in a garlic-tomato beurre blanc—an emulsified sauce with acidic snap that fell out of favor twenty years ago and that, Sublette makes clear, should be revived. His lightly crisp fried lobster tail appetizer with honey mustard pays obvious homage to local chef Paul Albrecht, for whom Sublette worked at Pano’s & Paul’s. He makes a tiny version of beef Wellington that stands solidly on its own without needing a tuft of salad on the side, noxiously overdressed with truffle oil.

If I’m eating high on the food chain, I gravitate to the French specialties like Côte de Veau Grand-Mère, a veal chop awash in cream, leeks, bacon, and mushrooms. It’s old-school satisfying in a way I’d almost forgotten. I prefer this, frankly, to the steaks, which are charcoal-grilled. The kitchen touts their absence of char, but I want an appealingly singed hunk of beef if I’m going for the chophouse experience. You can gussy up your meat with toppings labeled “chapeaux,” and among them—aha—is jumbo lump crab Oscar with asparagus and hollandaise. I’ll take that, please, over a filet mignon to fortify my Continental nostalgia.
I’m not the only one savoring the reverie, apparently. Tableside cart service has been a breakout hit with the early crowds, and professional servers like David Shaginaw, a veteran of Chops, perform the tasks with finesse. A wallop of melted brown sugar offsets the saltiness of a spinach salad with hot bacon vinaigrette tossed to order. Steak Diane was a special one evening, and the thin cuts of tenderloin blazed in brandy tasted particularly sublime paired with a side of Sublette’s herbaceous creamed corn. Bananas Foster, one of the flambé desserts in rotation, turned out too liquidy the night I tried it; it didn’t need that finishing squeeze of orange juice. I was way happier with my Grand Marnier soufflé, a dreamier, less sweet alternative to the raspberry option.
By re-creating a near-extinct era of luxury, Viande Rouge emerges as one of the most daring restaurants of the year. A new generation of diners has a chance to fall for these golden oldies. And the next time my parents visit, I know the first place I’m taking them. —Bill Addison
Viande Rouge
RATING ** (very good)
9810 Medlock Bridge Road, Johns Creek
770-623-4959
vrsteakhouse.com
HOURS Monday–Thursday 5–10 p.m., Friday–Saturday 5–11 p.m.

Photograph by Gregory Miller. This review originally appeared in our September 2011 issue.