Home South Carolina Where to Stay: Spotlight on Hotel Trundle

When Rita Patel and her husband, Marcus Munse, decided to open a boutique hotel in their hometown of Columbia, they knew they wanted to bring something different, unexpected, even magical to the city’s traditional lodging scene. At the same time, they were committed to creating a property rooted in the life of the city and reflective of the community’s talents. And their selection of a unicorn—a creature at once fantastic and familiar—as the hotel mascot and logo underscored their twinned (and, some might say, unreal) aspirations.

But dreams do come true, at least for this pair of young hoteliers: On April 9, National Unicorn Day, the couple cut the ribbon on Hotel Trundle. Occupying three historic commercial buildings dating to the early 1900s, the forty-one-room inn preserves many original details, from exposed brick to pressed-tin ceiling tiles. These elements provide the backdrop for a design scheme that is anything but aged. The spacious, light-filled lobby, painted shimmering silver and rich purple, features a mash-up of styles. Art Deco elements and midcentury-modern furniture with updated upholstery (think Great Gatsby meets Jonathan Adler) come together to create a space that is hip but homey.

The young and playful spirit is carried into the hallways, which are hung with original photography featuring Lego people “visiting” local attractions. The wallpaper displays how-to schematics of hand-puppetry; strategically lit blank spaces serve as practice areas. The sense of fun also extends to the front sidewalk, where machines send thousands of bubbles into the streets of downtown Columbia.

But it’s not just the guests who are encouraged to enjoy themselves. The hotel is in many respects a playground for the dozens of local artists and craftspeople with whom Munse and Patel collaborate to create a one-of-a-kind experience. Craft brew experts from Columbia’s Craft and Draft curate the beer selections on tap at the front desk, and the husband-and-wife team behind Carolina Kernels provides the gourmet popcorn served at turndown. Even the beds are local pieces of art, showcasing the handiwork of furniture designer Josh Cox of Columbia’s Bricker and Beam. (Oh, and the mattress? It’s made by Columbia’s fourth-generation mattress company Best Mattress.)

With a day of play behind you and a bed built for a night of deep sleep and the dreaming of dreams, you might be inclined to tuck in early. But chances are the kid in you will be begging to stay up late and make the most of your time at this wonder-filled inn.

To Market, to Market
Experience more of Columbia’s creative culture at Soda City, just steps from the hotel. The Main Street market fills four city blocks, from the South Carolina State House to Taylor Street, every Saturday morning, year-round. Grab a Belgian waffle or cup of kombucha and check out performances by flamenco dancers and string quartets. Browse the booths for an antique lamp, a basket of fresh produce (or hydroponic herbs), maybe even a pet rabbit.

Land of Giants
Known as “Redwoods of the East,” Congaree National Park, just thirty minutes outside downtown Columbia, is home to twenty-five trees that are the largest of their species in the United States, including a loblolly pine that would overtop a seventeen-story building. (Tip: Pack plenty of bug spray; the upper ranges of the park’s “Mosquito Meter” progress from severe to ruthless to war zone.) 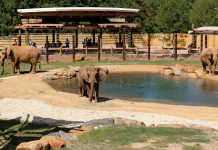 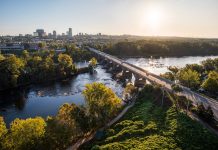 48 hours in Cola: Where to eat, drink, stay, and play in South Carolina’s capital 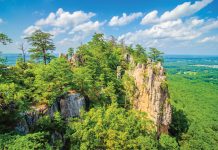