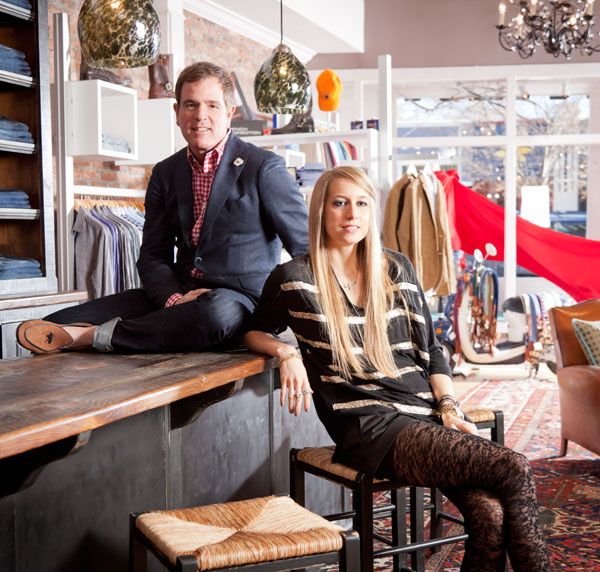 Looking for a quick game of pool? Want to watch the game? How about an ice-cold SweetWater? No, this isn’t your local pub—it’s 310 Rosemont, the new men’s and women’s high-end fashion boutique in the heart of Virginia-Highland. With locations in Virginia, Tennessee, and Texas, owner Winter Hodges opened his fifth shop in Atlanta last October. Step inside and you’re likely to be greeted by Chanel, a chocolate Lab and unofficial store mascot. Beneath the crystal chandeliers is the rustic Denim Bar that houses not only the fixings for your favorite cocktail or Starbucks brew but also shelves stocked with Citizens of Humanity and Nudie Jeans. If you’re not in the market for denim, take your complimentary beverage and browse racks of sheer Haute Hippie blouses and silk Tolani tunics for women and Billy Reid outerwear and Southern Tide T-shirts for men. “It’s nice to expose these kinds of brands to people in Virginia-Highland,” says owner Winter Hodges. “A lot of our customers don’t want to have to travel to the mall to shop.”

In 2005 Hodges, now in his late forties, was diagnosed with lymphoma. While undergoing treatment, he focused his attention on his first clothing store, Westwin (“West” for the western part of Tennessee and “Win” for Winter), which he opened in the early nineties in his hometown of Trenton, Tennessee. After a year, Hodges was in remission. Looking for a new challenge, Hodges turned to Roanoke, Virginia, where he opened the original 310 Rosemont store, named after his childhood address.

Despite living in Atlanta for the last sixteen years, Hodges waited until the other locations were established before venturing into his own backyard. Managing the store (and Chanel’s owner) is Jessica Dixon, who purchases different lines and designers for each of the 310 Rosemont locations. “I’m always listening to what the customer at each specific location likes and doesn’t, but I consider my taste level as well,” says Dixon. After twenty years in the industry, Hodges knows his team, specifically Dixon, is the key to his success. “My father’s advice was ‘Surround yourself with those who know more, and when you find someone who can do it better, let ’em do it!’ Jessica may be only twenty-four, but she’s talented beyond her years, and we make a difference as a team.”

This article originally appeared in our February 2012 issue.