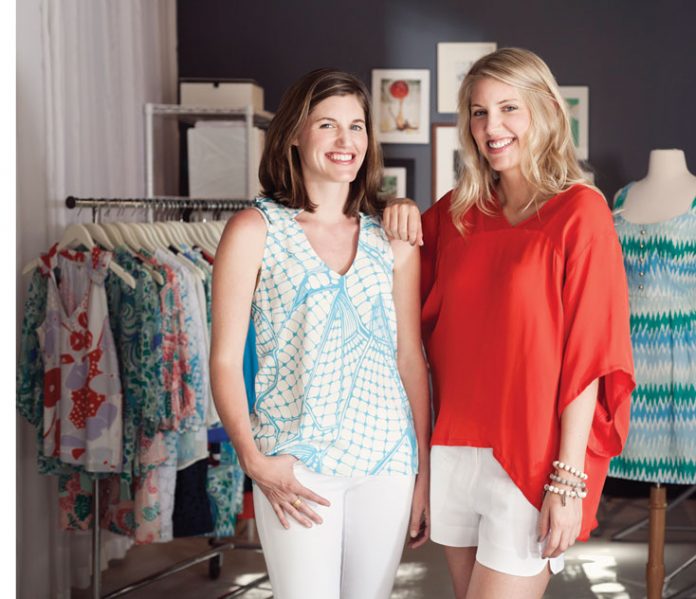 Annie Griffin, twenty-nine, always knew she wanted to be the creative force behind her own business. She studied studio art at Southern Methodist University and fashion design at SCAD Atlanta, and soon after formed Annie Griffin Collection. But sales wasn’t her thing, so after a year and a half of frustrating market experiences, the designer brought on her younger sister, Robin Gerber—a UGA grad and already a retail veteran—to head up that area. In their sleek studio space in Peachtree Hills, the two complement each other’s skills and interrupt each other’s sentences as only sisters do.

Originally from Memphis, the sisters say Atlanta is the perfect home for their line, which has decidedly Southern features such as flowing silks, scalloped hems, easy tunics, and plenty of color. They tried business in New York, but the city offered neither the comfortable pace of life they love nor the Southern inspiration that fuels their work. Gerber says, “The Atlanta woman understands our clothes. She’s conservative . . .” Griffin chimes in, “But she wants to feel modern. She wants something fresh.”

With only four full-time employees, Annie Griffin Collection (not to be confused with the similarly named Atlanta-based decorative paper company Anna Griffin) is carried by more than 200 boutiques across the country. Griffin says that she and Libby Culligan, who helps with design and handles public relations, gather images from Pinterest and magazines of artwork, interiors, nail polish colors—anything that inspires—to come up with each season’s theme. Atlanta itself has inspired Griffin. “We just went to the Optimist for my husband’s birthday, and I was taking pictures of the artwork on the walls and sending them to Libby,” Griffin says. “At this point, we’re set up so we could work anywhere, but we love this city.” Of course, Gerber points out, it doesn’t hurt that five out of the twelve major trade markets they attend take place here at AmericasMart.

They’ve recently finished designing collections for resort and holiday 2013, and by this month, their summer collection—inspired by a seventies poolside scene—will be in stores. Blouses typically retail from $190 to $240, dresses from $260 to $325. In Atlanta, Annie Griffin Collection can be found at Poppy’s (56 East Andrews Drive, poppysof­atlanta.com) and anniegriffincollection.com.