The billion-dollar Buckhead Atlanta, by San Diego–based developer Oliver McMillan, celebrates its grand opening on September 18—with shops rolling out over the next eight months. Here are the additions we’re most looking forward to.

Retail
The six-block shopping area (the word mall is taboo) will feature luxury labels and contemporary brands, many of which are opening storefronts in Atlanta or the Southeast for the first time. Up to sixty retailers and restaurants are expected to occupy 300,000 square feet; so far, seventeen stores have been announced.

Bella Bag
The designer handbag retailer (the only local business announced so far) will relocate from Miami Circle to a more distinguished locale, nestled among top international brands. Its goods—like a $40,000 Hermès Birkin bag—are 30 to 70 percent off retail.

Bonobos
A menswear company started online in 2007, founded on the principle of good-fitting pants, Bonobos now has “guideshops” where personal shoppers advise your choices.

Canali*
Men on the hunt for a crisp, rich suit—or a hip velvet jacket—need look no further than the classic Italian Canali.

Etro*
Founded in Milan in 1968, Etro remains family-owned, and this will be just its sixth shop in the U.S. Find collections for men and women with wild patterns—from floral to abstract to its signature, paisley.

Hermès*
Hermès has been waiting in the shadows of the development since it was still Ben Carter’s Streets of Buckhead. Finally, the Parisian retailer will take over 4,100 square feet at the cornerstone building on Buckhead Avenue, offering its ever-elegant clothing and lifestyle goods.

Moncler
This French-Italian brand is known for its very expensive, very chic puffy coats. Atlanta is nowhere near the slopes and our winters are pretty balmy, but we kinda don’t care.

Scoop NYC
Scoop is like a mini department store. With lines like Opening Ceremony and Mary Katrantzou, its flagship in SoHo has long been a go-to head-to-toe shop for New Yorkers. We bet it will become one here, too.

Warby Parker
We’ve been buying the frames online for years; now we get to try them on first.

Dining
Eleven restaurants, one coffee shop, and one bakery are expected to open in Buckhead Atlanta, starting this September and continuing into next year. Although the region’s three other new mixed-use developments—Ponce City Market, Krog Street Market, and Avalon—have opted to draw from local talent, Buckhead Atlanta has taken a more corporate route, importing national franchises from New York City to Florida. Why that’s not necessarily a bad thing:

American Cut
Atlanta has plenty of posh steakhouses, but none branded with a Food Network Iron Chef. In collaboration with LDV Hospitality, Marc Forgione will open a third location here, and unlike his Tribeca flagship, it will span three stories and include rooftop dining.

Georgetown Cupcake
In 2008, when cupcakes were a new craze, this D.C. brand grabbed a national following. Red velvet with vanilla cream cheese frosting is its most popular flavor, but also look for regional specialties like peaches and cream.

Shake Shack
What started as a hot dog cart in Madison Square Park in 2001 has ballooned into a burger empire spanning seven states and five countries. Danny Meyer brings his griddled patties and frozen custard shakes to Atlanta—a burger battleground with steep competition. 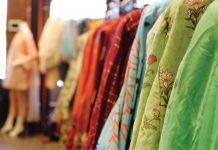 A love letter to a Pakistani clothing shop