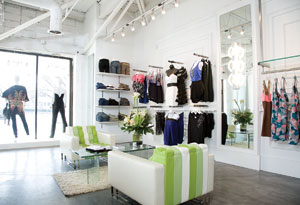 Emily Dees Boulden doesn’t waste a lot of time. In 2004, just days after earning her fashion merchandising degree, the Ole Miss grad struck off for Birmingham to work as an assistant buyer for Saks Incorporated. She loved the clothes but grew tired of crunching numbers at a desk, so in 2006 she opened her own boutique, called Swank, in Birmingham’s tiny Mountain Brook suburb. She stocked it with hard-to-find, hot-off-the-runway pieces and earned herself a following, turning a profit even in 2009 as shops all around her shuttered. Now, the twenty-nine-year-old brings her seasoned buyer’s eye to the Shops Around Lenox, site of Swank’s second location.

When asked how she landed such a choice gig out of college, Boulden replies, “I was just good. [Pause.] Oh, don’t say that! That sounds awful!” Raised in the tiny town of Philadelphia, Mississippi, Boulden is a bona fide Southern belle—twangy and tan and so knockout gorgeous you’re tempted to hold it against her. She grew up working in her grandmother’s general store, a town landmark called Williams Brothers. (Fun fact: She sold clothing while her cousin, NFL quarterback Eli Manning, sacked groceries.) But her tastes run more Manhattan chic than Mississippi sorority. At Swank, for instance, you might find an asymmetrical white leather vest from Rozae Nichols, a gold lamé miniskirt from Whitley Kros, or a bold graphic dress by Mara Hoffman.

In Birmingham, Boulden carried only exclusive lines—a tougher feat in Atlanta. “I travel and search and try to buy things I know won’t be duplicated. Even if someone else carries the line, my eye is different,” she says. She gravitates toward lesser-known talent but has a sweet spot for certain biggies—Vivienne Westwood and Vivienne Tam and footwear by Barbara Bui. While these designers command four-figure prices, Boulden peppers the store with less expensive pieces—a $130 blazer here, a $40 ring there—and points out that despite her young age, Swank is not necessarily geared toward a young crowd. “I want to be a place where a mom can come with her daughter and they both leave with something,” she says. One group she’s not targeting: Atlanta’s famous Blue Jean Bandits. “If there are some leggings bandits, they can come here,” she says. “I carry lots of those!”