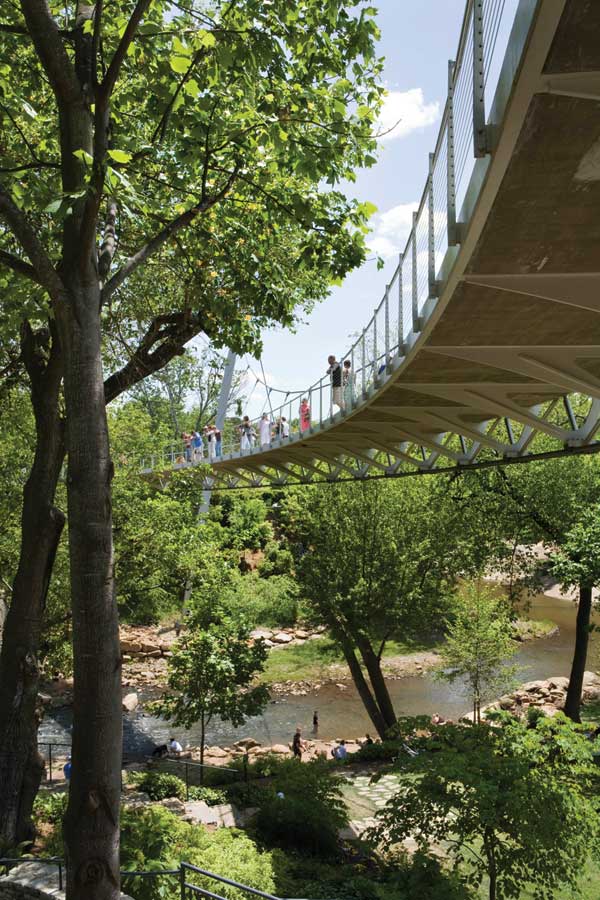 While driving through downtown Greenville, South Carolina, after a recent visit to my parents’ house nearby, my husband—who has called New York and L.A. home—turned to me and said, “I wouldn’t mind living here one day.” I was stunned to realize that I agreed with him. In the eight years since I left the Upstate, this stretch has somehow evolved into one of the Southeast’s most vibrant Main Streets.

Once the “textile center of the South,” Greenville’s core dwindled with outsourcing and suburban flight in the seventies. But rather than accept the inevitability of urban decay, prescient city leaders reduced driving lanes, added curbside parking, and planted saplings along the sidewalks to make the area pedestrian friendly. With the addition of a world-class (and lately expanded) Peace Center for the Performing Arts in the nineties, those early efforts finally paid off.

A brass quartet plays outside the Westin Poinsett, Greenville. In fact, street performances—from concert series to October zombie walks—often enliven downtown plazas. The once-condemned Poinsett, carefully restored to four-diamond, Prohibition-era elegance, bewitched even George Clooney, who made it his home while filming Leatherheads nearby.

The Reedy—whose currents powered Greenville’s early settlements and mills—buoyed the city again when Falls Park opened by its shoals in 2004. Here visitors can rent Reedy Rides bikes and hop on the Swamp Rabbit Tram Trail, a new thirteen-plus-mile greenway that runs to neighboring Greenville Zoo.

When hunger calls, I face a dilemma unfathomable a few years ago: too many buzzed-about, chef-driven restaurants. Greenville’s dining revival took off in the late nineties when Carl Sobocinski opened nouveau Southern Soby’s in a renovated cotton exchange. Now Soby’s has its own farm, and its owners have other hits like the Lazy Goat (with tapas such as bisteeya, a savory Moroccan pastry) and the Nose Dive gastropub. I finally settle on American Grocery Restaurant, known for sustainable seafood.

Another marvel: growing global eats. Popular downtown spots like chichi Persian Pomegranate on Main and Belgium-focused the Trappe Door, with its 150-plus beers, are a byproduct of Greenville’s influx of international firms. Michelin and BMW top that list, and the latter’s Performance Driving School draws fast-lane fans from across the nation.

My night ends at West End’s the Velo Fellow, a public house with lovely craft beers—the names of which I struggle to hear over the din of young swains in suspenders and handlebar mustaches. But to me, seeing Greenville thrive is worth a bit of noise.

Photograph courtesy of the Greenville CVB