Some friends of mine are selling their house in Cobb County and building one in Serenbe, the bucolic New Urbanist community in a southwest corner of Fulton County. Yes, they’re tired of the Cobb commute, but it’s more than that. They have two boys under age five and want them to grow up where they can ride their bikes and explore the woods and come home at dinnertime tired and dirty and exhilarated. As they described it, the decision came impulsively. The place has that effect. On a recent visit, my wife and I discovered that a weekend at Serenbe—there’s a spa, three restaurants, and activities aplenty—is both restorative and serves as not-so-subtle marketing for relocation.

The Backstory
Over the past 11 years, Serenbe, owned and operated by former Atlanta restaurateur Steve Nygren and his family, has reimagined sprawl. Houses are clustered into four hamlets spread among a thousand acres. Each one evokes a centuries-old English village: The homes are close together, front porches are barely a dozen feet from the sidewalk, and back porches look out not on private yards but expanses of woods.

Where to stay
The Inn at Serenbe is small—just 27 rooms. If you need more space, the inn manages rental homes and cottages, including the Sanctuary, a five-bedroom townhouse with a professional kitchen and a dining room table long enough to hold a board meeting.

Where to eat
The Blue Eyed Daisy is an unofficial meeting place in the town center, great for coffee and a light lunch. Two standout restaurants—the Hil and the Farmhouse at Serenbe—both draw ingredients from the development’s 25-acre organic farm, which grows more than 300 varieties of fruits, vegetables, herbs, and flowers. Because of this, menus change often.

What else to do
Seventy percent of Serenbe’s acreage remains undeveloped, save for 15 miles of paths, perfect for meandering through the pines. The lauded Serenbe Playhouse serves up theater alfresco (yes, it’s all outdoors). Last season we caught A Streetcar Named Desire, staged in open shipping containers, and this month visitors can take in Of Mice and Men (June 9–26). Serenbe also hosts top-notch cooking classes; book a weekend for the Southern Chef Series, limited to 10 guests, and you’ll get close to kitchen stars like Ford Fry and Linton Hopkins. 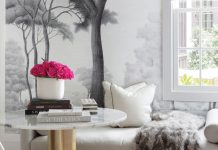