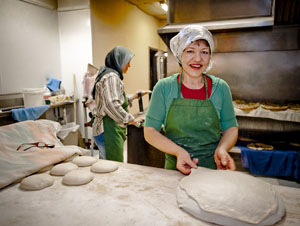 If Naomi Duguid and Jeffrey Alford, coauthors of the extraordinary Flatbreads & Flavors, ever come to Atlanta, I want to take them straight to Nazifa Garib’s humble bakery. The hand-painted sign above the door and the improvised nature of the space would remind them of their fieldwork documenting traditional recipes from around the world. We would tear into large, flat rounds of simple bread just peeled from a freestanding tandoor and share a vivid and timeless moment.

Alosta Bakery makes bread, called nan, the way it has been made in villages throughout Iraq and Afghanistan for thousands of years—with fresh leavened dough mixed in a large basin and stretched by hand over a round basket fitted with a cloth pillow. After a sprinkling of water, the dough is slapped on the inside of the tandoor, a cylindrical sheet-metal oven that looks like it could be easily dismantled and packed. In seconds, the bread develops large blisters and a mesmerizing aroma.

All over the Arabian Peninsula, nan is used to wrap food in much the same way as Indian naan, Ethiopian injera, or a Mexican tortilla. Alosta Bakery’s flat loaves are roughly the size of a medium pizza (fourteen inches in diameter), and at $3 for four loaves, the bread is one of the greatest bargains in Atlanta. I use it to make wraps, informal pizzas, and long chips to dip into plain yogurt. I prefer the regular nan, made with unbleached white flour, over its whole-wheat counterpart, which has a stronger flavor.

Each time I go to Alosta Bakery, I learn something new about the owner or the business. For example, when Garib isn’t working side by side with a young Iraqi baker, she makes deliveries (Talar International Foods in Clarkston carries her bread) and sometimes works as a multilingual court translator. She has taken me to the Arab grocery next door to show me the unctuous eggplant spread she likes to eat with her bread, and she always tells me that she will start selling halal pizza and pastries next week. Except for a few thick, Middle Eastern cookies and some sodas, I have never seen anything other than bread in the store.