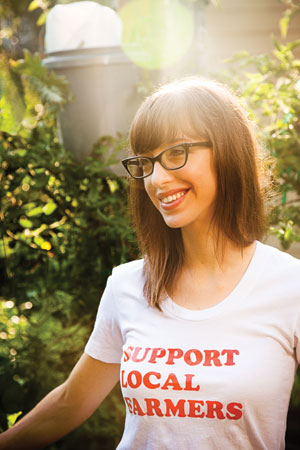 What is a nice, delicate-looking girl like Julia LeRoy doing searing pork chops in a kitchen that often reaches 95 degrees? If you met her out of context, you’d be more likely to guess “writes poetry in the shade” than “heads kitchen in a busy gourmet pub.”

LeRoy is responsible for the food at The Bookhouse Pub, where she works for the two hipsters behind MJQ, who knew her as a friend from her clubbing days and trust her with this newer project. She may be the most talented young Atlanta chef whose name you haven’t yet heard.

In my career, I have grown pretty disenchanted with pork chops, frequently served too thin or too thick and often with cloying notes of bourbon or apple that hide a sour, watery flavor. The dish I recently experienced as part of LeRoy’s “Localvore” Monday prix fixe menu is in an entirely different league. Not only is the meat sourced from the best local provider (Riverview Farms) and pan-sauteed in a way that honors its rich, honest sweetness, but the simple pairing with Crystal Farms baby carrots and a charming pink torpedo onion stuffed with sausage is Southern without histrionics.

I met LeRoy in Cabbagetown a few years ago, when she was supplementing her income with what she called “bootleg bake sales” held on the street. Willowy and fair, she had a day job—cooking on the line at The Dining Room at The Ritz-Carlton, Buckhead—that nearly wrecked her health. “I got mono,” she remembers, “and then my adrenal system collapsed.”

Peering over the rim of her big Buddy Holly glasses like an ingenue, the young chef summarizes for me a career she believes has been full of lucky breaks. Born in Detroit to Yankee parents, she grew up in Atlanta without much exposure to Southern food. While in high school, she often had to start dinner for her younger siblings while her mother, a chiropractor/kinesiotherapist/homeopathic practitioner, was seeing patients. Though she credits her upbringing for an early interest in food that is ethically raised and good for the body, LeRoy muses, “If my mom had ever worked in a restaurant kitchen, she wouldn’t have suggested that I become a chef.”

At twenty-one, LeRoy managed to get herself hired by Guenter Seeger, then the best and most demanding culinarian in town. As a condition for taking her on, he made her swear to go to culinary school after six months. She went to the Culinary Institute of America in Hyde Park, returned, and resumed working at Seeger’s. When she took a job with Bruno Ménard at the Ritz, she felt conflicted about leaving the brilliant Seeger, whose obsessive standards—“he’d look under our cars to see how well we maintained them”—she still embraces.

From the very beginning, LeRoy had to claw her way out of “the pastry ghetto,” where female chefs tend to be relegated. “I had no interest [in sweets], but I learned a lot,” she says. It is, in fact, one of her desserts, an infinitely witty and delicious funnel cake served on a paper plate, that made me fall in love with The Bookhouse Pub.

Few chefs get to see their names at the bottom of a menu when they are barely twenty-eight. “People have been struggling much longer than me,” LeRoy tells me modestly. But what I see in her is a stable mix of sincerity, enthusiasm, and discipline. She loves the South, telling whoever’s listening, “I want to be from Georgia so much.” And she has wasted no time establishing strong relations with local farmers whose struggles she supports.

The Bookhouse Pub may be a casual place (LeRoy won’t hear of me calling it a gastropub), but she makes room for Decimal Place Farm goat cheese, White Oak Pastures beef, Moore Farms and Friends produce, and Logan Turnpike Mill cornmeal and grits in her kitchen. After working for imperious chefs who always told her to “do it my way and do it now,” she gets to use her brains and her soul. That she has a conscience makes her even better! 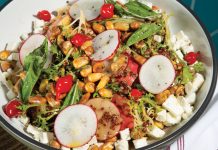