Feeding employees and selling toilet paper: How one Atlanta restaurant group is trying to survive COVID-19 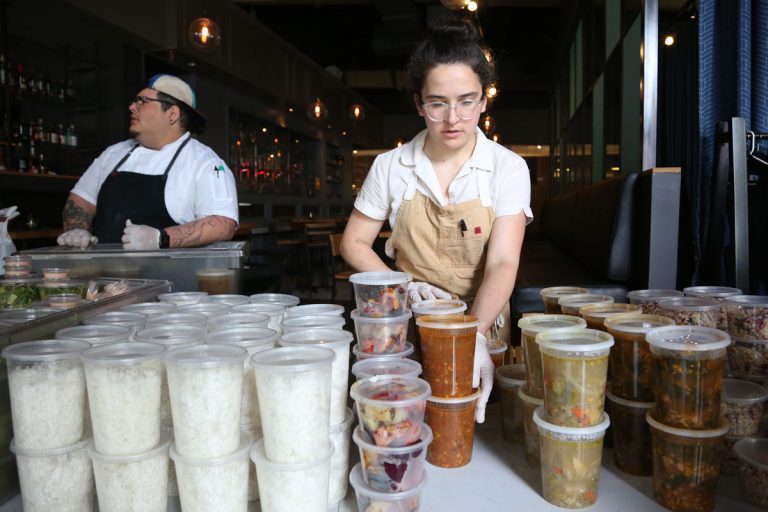 Juicy, thick filet mignon steaks were sizzling on the grill, soups were bubbling on the stove, fresh pasta was rolled, and pizza dough was spun. The chefs at Double Zero were cooking what looked like a feast, but these meals weren’t for customers. The dining room was empty.

With thousands of dollars worth of produce and meats in their fridges, Double Zero and the other restaurants belonging to Castellucci Hospitality Group (the Iberian Pig, Cooks & Soldiers, Bar Mercado, Recess, and Sugo), as well as ones across Atlanta and beyond, were quickly trying to use up their supplies and hand out free meals to hourly restaurant workers—who will likely be without work for the foreseeable future. 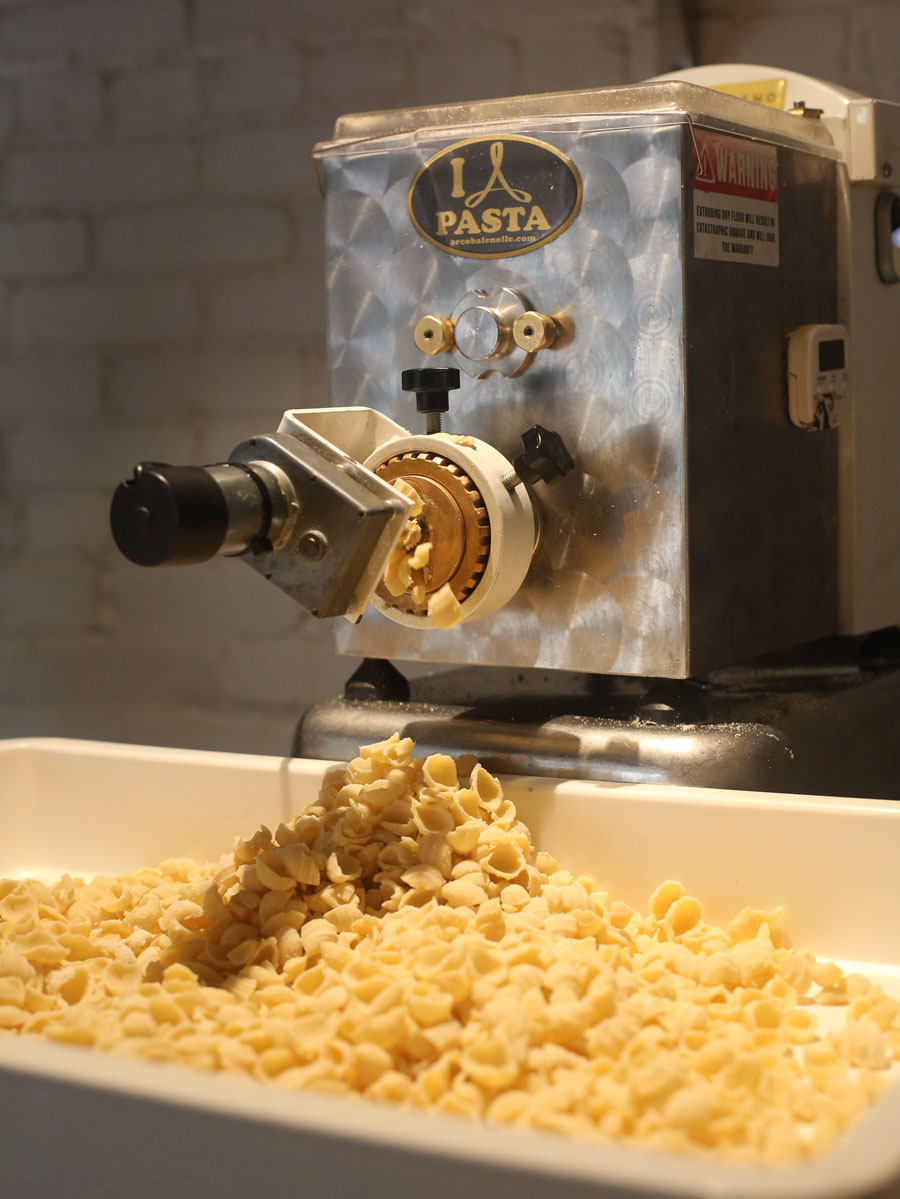 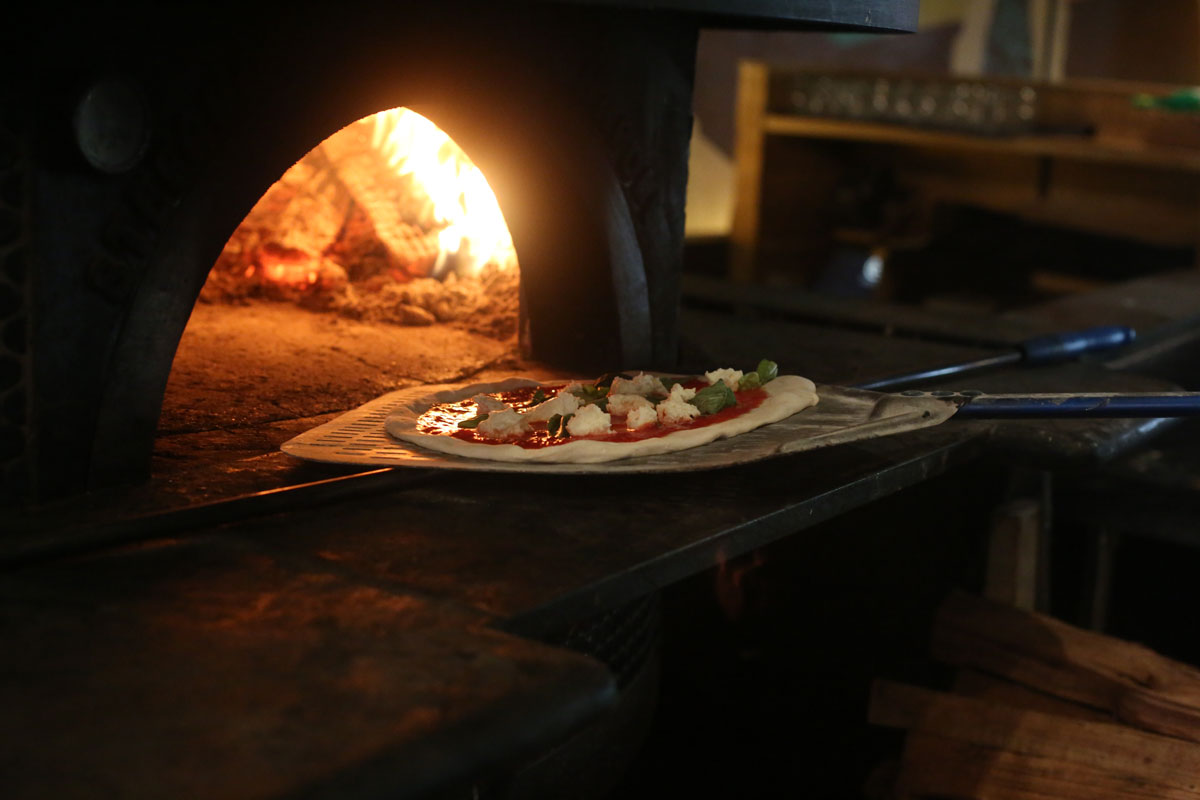 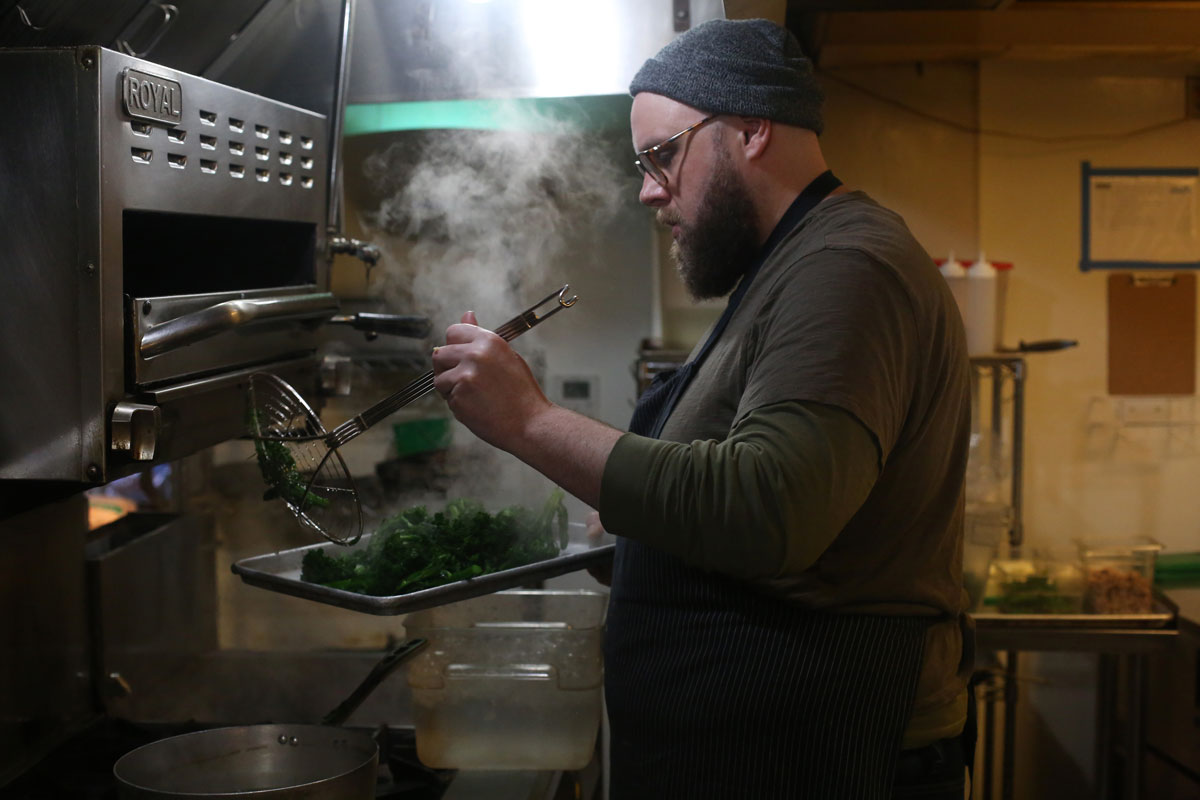 On Thursday afternoon, Atlanta Mayor Keisha Lance Bottoms ordered the closure of restaurants (among other businesses) within city limits in an effort to slow down the spread of COVID-19. Chef Victoria Shore of Recess quickly decided to use the supplies in CHG’s kitchens for a good cause. “There’s just so much food that’s not going to get sold because of this,” Shore says, “and so many people are out of work and money. I have a lot of staff members who have families and small kids and are living paycheck to paycheck. Hopefully this will help.”

Almost every Atlanta restaurant is scrambling to find whatever safety net they can for their staff and find uses for their food supplies, whether by giving workers free meals, seeking donations for them, or offering the public curbside pick-up, take-out, or delivery (with the hope the restaurant is able to preserve what few jobs it can). Cafe Intermezzo gave away free meals on Wednesday and Thursday to restaurant industry workers. Ladybird Grove and Mess Hall created the #ATLFamilyMeal hashtag to collect resources for its employees and those of other restaurants. Chef Mimmo of Red Pepper Taqueria is using his closed restaurant kitchen to keep staff working to help feed the homeless. 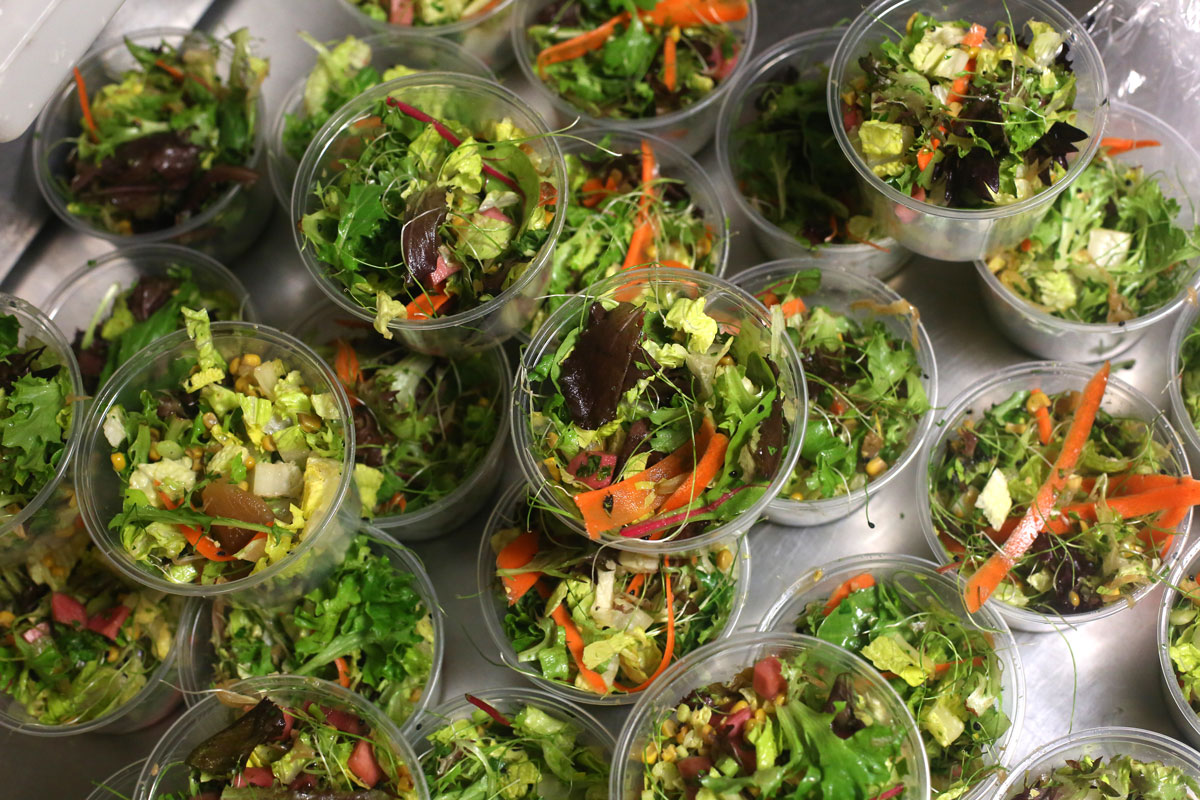 The reality is that many restaurants will not reopen, even after the scourge of COVID-19 lifts. “Our job as a company has and always will be to serve the community and our people,” says Federico Castellucci, CEO of CHG. “These aren’t people who sit in offices all day collecting paychecks. They often do not have enough savings to weather a disaster like this. Right now, every day is a battle, and we have kept our restaurants open despite great financial pressure. We won’t go down without a fight.”

By Thursday afternoon, Shore, along with Double Zero executive sous chef Zachary Lanier and several other CHG employees, had a pile of boxed meals set on a makeshift table near the front of the restaurant. The doors to Double Zero were open, and CHG employees and other restaurant workers—who weeks earlier had what seemed like stable jobs—began to trickle in to pick up the small lifeline extended to them. They almost all introduced themselves by the restaurants they had worked at. “Thanks so much for doing this” and “stay healthy” were on repeat as they shuffled through the short line to pack up their paper bags with food.

Some of them stuck around for a few minutes to catch up. Others offered support: “If you’re doing this again, let me know and I can come in and help cook.”

Lanier points out that customers who are ordering food to-go or by delivery from CHG’s restaurants are helping the businesses survive and allowing them to do whatever they can for their employees. “We’re just trying to reach all avenues to stay afloat,” he says. “One thing that’s giving me hope right now is that everyone must eat.”

The restaurants are getting extra creative by selling to customers the restaurant’s supply of toilet paper.

“One good that will come out of this is the appreciation we have for each other,” Castellucci says, “and the many many things we take for granted every day.”

Correction: This story has been amended to reflect that Castellucci Hospitality Group handed out food to restaurant workers at large, not just its own employees. 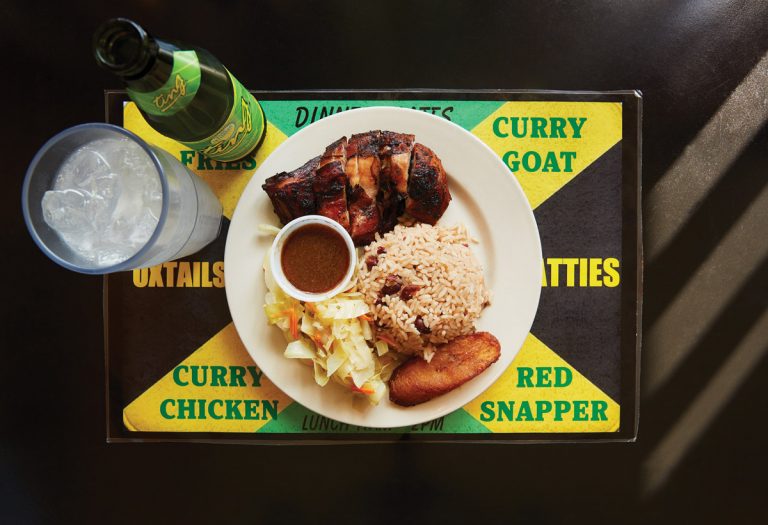 In November 1994, my family moved from our sunny, two-bedroom apartment in Los Angeles into a gray, two-story house in Lilburn. At the time, the neighborhood looked like your average suburb, with modest homes on half-acre lots winding down the street from soccer fields and public schools.

We made friends at our church, through our homeschool network, at taekwondo classes. But the basis of every social gathering for my family always has been food. And we were lucky enough to grow up in Lilburn, with a close-knit group of friends who would gather to cook together on a regular basis, each bringing a taste of their home: Greek, Lebanese, and Filipino recipes and flavors.

“Sometimes that’s where true progress starts—with a seat at each other’s table.”

As a kid who became accustomed to kibbeh and quail-egg soup, I was comfortable not just with a diversity of flavors but a diversity of people. As a journalist, including my years as a photo editor and writer at CNN, I’ve spent a lot of time traveling and reporting stories around the world—but I owe my appreciation of diverse cultures to my own hometown.

Our Eritrean neighbors would bake himbasha (a delicious bread flavored with crushed cardamom) and leave a fresh loaf in our mailbox. We’d celebrate iftar dinners with our friends, refugees from Iraq who’d settled here, spreading a blanket on the floor and arranging fruits and vegetables, hummus, and lamb. These memories became even more precious to me as I got older and put into context what was happening in the county at large. In 1990, Gwinnett County was 90 percent white. Today, it is 37 percent white (Lilburn itself is 31 percent white)—and nearly one in four residents was born outside of the U.S. Gwinnett has not been free of racial tension; many white residents opted to leave rather than embrace their new neighbors. But I feel lucky to have grown up in a place shaped by people from so many different backgrounds, and I am not alone.

My parents now have lived in that gray house for 25 years, and we’ve watched the city grow into the beautifully diverse and culturally rich place it is today. One of the largest Hindu temples outside of India is five minutes down the road from where I attended Sunday school. The Winn-Dixie where my family once shopped is now Nam Dae Mun Farmers Market. The JoAnn Fabrics first became a Wu-Mart and is now Talpa, a supermercado. The Outback Steakhouse where we fought over the last spoonful of “Chocolate Thunder From Down Under” reopened as Rohan, an Afghan restaurant. (It’s now closed, but another Afghan spot is set to open in its place.) Nearby, A Taste of Paradise serves Jamaican oxtails so good they would’ve warranted a visit from Bourdain.

The local Vietnamese restaurant we frequented kept a separate menu for its limited white clientele, but my mom managed to persuade the staff that we really did want the regular menu. And it was just as important to us to get to know our neighbors beyond those restaurant visits, to invite them into our home to share a meal in the same way they shared their cooking with us. Sometimes that’s where true progress starts—with a seat at each other’s table.