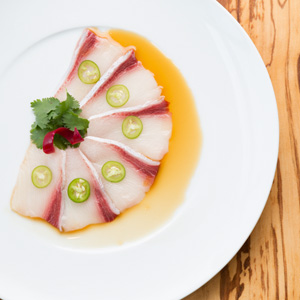 Is that Sir Anthony Hopkins at the other end of the long banquette? I’m not surprised. Buckhead’s newest sushi palace flaunts a stunning room of contrasting woods and a corps of cooks manning the eleven-seat, white-oak sushi bar bathed in buttery light along the back wall. Early on weeknights the mood is sedate, and the meal’s focus rests squarely on the contemporary Japanese cuisine of Fuyuhiko Ito, former executive chef of bygone MF Buckhead. Beyond traditional sushi nigiri and rolls, Ito’s menu takes cues from the playbook of Nobuyuki Matsuhisa’s global chain of Nobu restaurants: shrimp tempura with ponzu or a spicy mayo-based sauce, grilled cod marinated in miso, yellowtail sashimi crowned with rings of sliced jalapeño. The precise food alone makes Umi a worthy addition to the city’s dining scene, but the place developed a split personality soon after opening in late May. It quickly became a celebrity magnet, due in large part to its proximity to the St. Regis Atlanta, where visiting actors and athletes often stay. And later on weekend evenings, the dining room takes on a nightclub energy, with regulars who all seem to know one another standing and mingling among the tables.