Home Uncategorized Bowled over: Get your fill of Asian soups

What food comforts in winter more than soup? It’s the universal restorative. But among the world’s goulashes, stews, and minestrones, the Asian traditions of soup may be the ideal one-bowl meals. Their fragrant, nutritious broths soothe and energize. These four bowls never fail to warm the stomach and heart.

Bo Bo Garden | Congee
Chinese congee, also known as rice porridge or jook, is perhaps the simplest of all Asian soups, made from rice cooked down until it becomes thick. Although a common feature at many dim sum restaurants, the congee on the dinner menu at Bo Bo Garden shows off the soup’s nuanced flavors. Laced with strands of ginger and accented by preserved egg and chunks of pork, congee has never been so gratifying, even compared with my own grandmother’s. (Don’t tell her I said that.) 5181 Buford Highway, Doraville, 678-547-1881

Pho Dai Loi 2 | Pho
If you threw a rock from any sidewalk in Buford Highway, you would probably hit a restaurant that serves pho, which relies on deeply flavored broths extracted from beef bones after two hours of simmering in herbs and spices. I am consistently drawn to the pho dac biet at Pho Dai Loi 2. Steak, flank, brisket, tendon, beef tripe, and rice noodles mingle in a broth that is at once sweet, salty, and immensely soulful. 4186 Buford Highway, 404-633-2111

Haru Ichiban | Tonkotsu ramen
Ramen is the celebrity du jour of Asian soups, though in Atlanta it takes some searching to find a memorable, consistent version. This lesser-known contender, served at an unassuming sushi bar wedged into a Duluth shopping center, features traditional tonkotsu broth made from boiling pork bones until the liquid is creamy and gently sweet. Slices of pork, bamboo shoots, scallions, seaweed, and, of course, chewy ramen noodles finish the dish. 3646 Satellite Boulevard, Duluth, 770-622-4060, haruichibanjapaneserestaurant.com 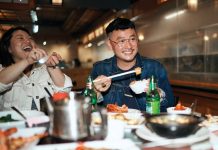 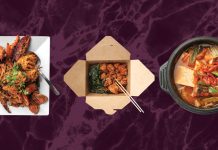 9 of our favorite late-night dishes on Buford Highway