As restaurant concepts go, the one behind Atlas in Buckhead’s hyper-upscale St. Regis Hotel is a bold gamble. In addition to a $5 million design overhaul of the dining room—courtesy of the ubiquitous Johnson Studio—and an open kitchen whose consulting chef is Atlanta culinary icon Gerry Klaskala, Atlas boasts 23 museum-worthy paintings and drawings from one of the world’s foremost private art collections.

The gamble, simply put: Would the prospect of dining under the watchful gaze of portraits by the likes of Picasso, Matisse, Lucian Freud, and Francis Bacon seem an added value inducement to booking a table here? Or would the presence of millions of dollars’ worth of 20th-century art, owned by British billionaire Joe Lewis, carry the threat of overbearing ostentation?

Doug McMahon—senior managing director of the Lewis-founded Tavistock Group, which owns the St. Regis property and the restaurant—is aware there’s a fine line to walk. He acknowledges that the previous occupant of the space, Paces 88, was “very much a hotel restaurant”—meaning one that appealed chiefly to hotel guests who didn’t feel like getting in a car. Atlas, by contrast, is intended to offer an atmosphere of informal elegance, comfortable enough to serve as a regular haunt for the local gentry, especially full-time residents of the St. Regis. “We didn’t want to be a special-occasion restaurant where someone comes once a year,” McMahon says.

Tavistock—an international investment group based in the Bahamas that owns a number of resorts, sports teams, and restaurants—deliberately sought a chef with local ties: Atlas chef de cuisine Christopher Grossman, a French Laundry veteran, previously worked under Klaskala at Aria. (McMahon says the company plans to make further forays into the Atlanta dining scene, though it will be difficult to top Atlas in terms of the wow factor.)

The formerly open floor plan is now cleverly divided into several distinct zones: a small library with a fireplace and leather club chairs, a walnut-paneled bar with a handful of stools and casual seating for those awaiting a table, a long communal table with a view of the kitchen, and finally, the main dining room, where most of the celebrated art is displayed. The overall feel to the room is at once intimate and clubby, with dark, high-gloss lacquered walls contrasting with the plaster arched ceiling.

Instead of an intimidating gallery layout, with each piece commanding its own chunk of wall, most of the works have been arranged in small groupings in a manner typical of a European salon (sans nameplates), set into dining niches and overlooking large banquettes. Nor are any of the pieces of an imposing scale; none are much more than three feet across, and some, like a Bacon portrait study, are downright petite.

Carolyn Carter, who studied art history at Emory University, curated the Atlas collection at Lewis’s invitation. “I chose pieces that speak to one another,” she says, either in their subject matter, in color palette and style, or through personal connections between the artists, some of whom were contemporaries. She’s been happily surprised to find the servers as eager to learn about the artists’ backstories as they are the kitchen’s nightly specials.

In one prominent niche, she has grouped the Bacon with two fleshy Freuds and a pair of portraits by Leon Kossoff, a still-living British expressionist. In the other niche are four figurative works by French-influenced Japanese artist Tsuguharu Foujita, along with a quasi-cubist portrait by Fernand Léger and drawings by Picasso, van Gogh, and Matisse—the last a charmingly simple self-portrait of the aged artist, rendered on sketch pad paper. A larger Braque nude anchors another alcove near the kitchen, whose workings are clearly visible to diners. In coming months, Carter says, pieces could be rotated out for others in the vast Lewis Collection, which is reputed to be valued at more than $1 billion.

“The Atlas collection is really top-notch, museum-quality painting and drawing by major 20th-century artists,” says David Brenneman, director of collections and exhibitions at Atlanta’s High Museum of Art. “I was envious as a curator. We’d love to have work like that at the High.”

Oh, and in case any Russian oligarchs are reading this, all the artwork is for sale, though no one on Tavistock’s team disclosed prices.

“We knew the art would be bold, so we could create a dramatic interior with rich colors and leather seats to serve as a complement,” says Johnson Studio designer Brittany Stafford, who notes the aim for Atlas was to create the kind of ambience found at a London supper club.

The dining room has unobstructed sight lines—but only for diners. A display case of high-end cognac near the bar appears positioned to discourage gawkers. But even those who drop in only for a drink can soak in some culture. A typically dreamlike Chagall painting hangs in the bar area. And just behind the hostess stand is an Expressionist portrait of a young girl by Chaïm Soutine that spent six months on display at the High; Carter says she wanted a familiar face to greet Atlanta guests as they arrived.

Also welcoming to locals is the library’s collection of books, many of which relate to Georgia history—the rest cover modern art and design, including the artists on display—and all of which are there to peruse. Other items on display of interest to Atlantans include a letter from President John F. Kennedy praising Mayor Ivan Allen Jr. for reaching a peaceful accord with civil rights leaders, and a program from the 1965 Nobel Peace Prize dinner at the Dinkler Plaza Hotel honoring Martin Luther King Jr.

Security at the dinner-only restaurant is almost invisible, but nonetheless real, Carter says. “Each piece is behind glass in its frame, individually alarmed and firmly attached to the wall,” she explains. “It’s all very secure.” Oh, and they serve food. Read an early review of the menu here. 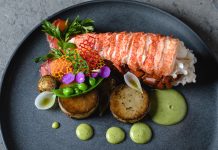 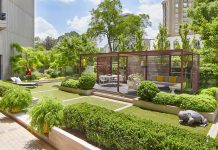