Community Q BBQ’s chef-owner Dave Roberts may have the best barbecue in town, but his most talked about dish doesn’t come from the smoker. Roberts’ three cheese mac and cheese, made with thick rigatoni noodles and a blend of parmesan, cheddar, and monterey jack, is the restaurant’s most popular offering.

Roberts first developed the recipe in 2001 while in the kitchen at the now-closed Cherry. He based it off of his mom’s recipe, replacing her elbow macaroni with rigatoni and using only cream and cheese to thicken the sauce. He served it with a pork chop because he wasn’t sure if he could keep up with demand if it was on the menu. “Bartenders would come in before their shift, order this $24 pork chop dish and say, ‘Keep the pork chop and just give me a double order of the mac and cheese,’” Roberts says.

Roberts brought the recipe with him to Sam’s BBQ-1 in Marietta. When one of his partners complained that it wasn’t a traditional barbecue side and removed it from the menu, customers clamored for its return. “He’s still serving it,” Roberts says.

Roberts estimates that Community Q goes through nearly 600 pounds of dried pasta and 2,400 pounds of cheese in a week. He ships orders across the Southeast so families can bake it for Thanksgiving, Christmas, and Easter. “I think just about everybody that comes in here gets it,” Roberts says. “We say we’re a mac and cheese restaurant that serves barbecue on the side.” 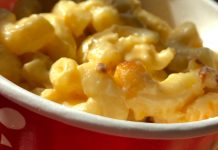 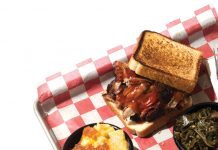