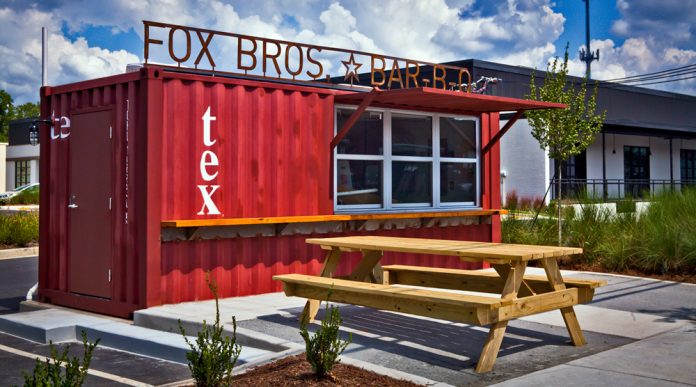 Starting October 3, Atlantans will be able to enjoy their favorite Fox Bros. barbecue for lunch without driving to Candler Park. Located in a shipping container in Armour Yards at 120 Ottley Drive, the Fox Bros. Bar-B-Que Que-osk will serve a pared-down version of the original Fox Bros. menu Monday through Friday from 11 a.m. to 2 p.m.

“It’s feeding an area where’s there’s not an abundant amount of food,” owner Jonathan Fox says. “It gives us the opportunity to play with some different menu items we’ve been tinkering with. There will be some surprises.”

Seating will be limited to some picnic tables outside, but Fox expects most people to get their food to-go. The menu includes pulled pork and brisket sold by the half pound, sandwiches, Frito pie, mac ‘n’ cheese, and banana pudding. After the initial opening, Fox plans to start serving breakfast with offerings like brisket biscuits and breakfast tacos.

“It’ll be a quick to-go option for people on the run,” he says.

He’s also planning to open a full-service Fox Bros. restaurant on the Westside next year.