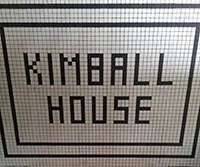 The original Kimball House, a hotel that took up an entire city block, opened in 1870 in the area bound by Peachtree Street, Pryor Street, Wall Street, and Decatur Street. The new Kimball House—a restaurant with former Joël line cooks Jeffrey Wall and Philip Meeker in the kitchen and ex-Leon’s mixologist Miles Macquarrie behind the bar—opens in Decatur tonight. Housed in an old train depot at 303 East Howard Avenue, Kimball House will serve dinner nightly. Below, Meeker shares his inspiration for the menu and tells us what to expect.

What’s on the menu?
The menu has a whole section devoted to oysters—there are ten types and they’ll rotate. The menu changes daily. There will be other raw dishes, aside from oysters, like smoked trout—things done in interesting ways, not just sushi.

There are three main sections of the menu: vegetables, meats, and seafood. Each have an equal presence. We have smaller dishes at the top and larger dishes at the bottom.

The whole idea is for the dishes to be inventive. We’re trying to use very fresh ingredients to the point where we’ve started our own garden on the premises.
We have ginger growing. We have radishes. We’re growing herbs, greens, kale, lettuce, basil, and cucumbers.

It’s rather uncommon to have two executive chefs. How do you and Jeff divvy up responsibilities?
Jeff and I met on the line at a Four Diamond French restaurant in Buckhead. We struck up a friendship right away. We’re both passionate about making exciting, flavorful food. We like to bring out the high notes you get in fresh ingredients and preserve those into whatever technique we do.

We’ve been friends for a long time and are also roommates. We’ve entertained a lot of our friends—we still like to cook in our downtime. We know our strengths and weaknesses and how we work together. As we’ve started developing the kitchen and hiring staff and training, we kind of see who is better at doing what and then move forward in that way. We’re careful to be respectful of the other person.

The advantage of having two executive chefs is you both have your name on the line. You’re totally responsible for everything no matter what and you know the other person will be equally committed.

Where do you get your inspiration?
A lot of it comes from grand old hotel menus. We have lobster cocktail, shrimp cocktail, and an entire three-course steak dinner with salad and soup. Kimball House gets it name from an old hotel that had an opera house and a fine dining restaurant. They had a meal that came with two sides, a soup, and a salad. It would fill you up, so we decided to do something like that.

We also work with foragers and farmers in the area. A lot of our inspiration comes from that.

What’s the bar scene like?
When you walk into the restaurant, the bar is one of the first things you see, but it blends well into the rest of the room. It’s constructed out of the original wood floor for the building. There are leather banquettes, marble tabletops, and wood tabletops. Miles’ cocktails are very imaginative. It’s inspiring to work with him, and he crafts a well-rounded cocktail list.

Anything else we should know?
When Jeff and I cook, we go to great lengths to make sure we’re cooking from our hearts. We want the food to be an experience, but we also want the love that we put into this food to be present. We don’t just want it to be tasty and rewarding to eat, but nourishing as well. We don’t want [diners] to feel like they’re stuffed. We want them to feel good.

Jeff and I are also committed to teaching cooks—so much that we’ve established a culinary apprenticeship program for which we have designed a curriculum alongside hands-on training. We’re trying to build community.