The Hop City Craft Beer & Wine team is opening its second restaurant on March 1. Called Boxcar, it’s located in the Lee + White development at 1020 White Street in West End. About 1,000 beers and 800 wines will be served, with 80 rotating draft options at two different bars. Boxcar will offer cocktails, too.

“Boxcar is inspired by Atlanta’s railroad history and its modern use of the infrastructure [the BeltLine],” says owner Kraig Torres. “I love the Westside BeltLine. I believe in the neighborhood.”

We spoke to him to learn more.

How’d you come up with the idea for the concept and decor?
I love the urban art scene. I’m mesmerized by the graffiti on the train cars that go by at our West Midtown Hop City. We partnered with street artist Catlanta to create a mural of our patron saint here, hobo Leon Ray Livingston.

Now we’re doing our part to combat homelessness by donating a portion of our proceeds to the Atlanta Mission.

Why did you turn your focus from retail and bars to restaurants?
Restaurants are not my background or my passion. I’m an accidental restaurateur. I love beer and know how to create a fun beer-by-the glass experience. The city of Alpharetta kind of forced our hand and made us open a restaurant [by requiring 50 percent of sales to be food], but I’m very pleased with how [Barleygarden] turned out.

We have a world-class chef on our team. Matty owned several restaurants in Hudson Valley. Initially, [Boxcar] was going to be retail and bar, but Matty inspired me to go back into the restaurant world with an elevated version of what we do at Barleygarden.

How did he inspire you to open another restaurant?
At Barleygarden, we offer handheld food. I felt like I was holding Matty back a bit. He wanted to create things that were a little more sophisticated. He created twists on the familiar, really thoughtful items that would be perfectly showcased at Boxcar. It’s his playground. We built it as a showcase for his ability.

What’s the inspiration for food?
Matty is a big fan of charcuterie. He cures his own meats. My favorite thing on the menu is the pate, and I don’t usually like pate. The idea is to have things like that side-by-side with the familiar—like a burger.

Will Boxcar have a late-night menu?
Not initially. We’re starting with dinner five nights a week, lunch three days, and weekend brunch to allow our kitchen to grow into the clientele.

How will the beverages be similar (or different) to those at your other locations?
We’re utilizing a lot of ASW Distillery spirits because they’re our neighbor. The cocktail menu will be unique to Boxcar. Brendan McMackin is our cocktail guru. We have eight opening cocktails. I’d describe them as a wide range of fun.

The beer menus are different at each of our locations. At Boxcar, we’ll have 1,000 beers and 800 wines, with 30 rotating, small production wines by the glass. We have 28 rotating [beer] taps upstairs and 48 downstairs. This includes one-offs and limited releases from local friends and companies all over the world. Look for fun, rare items including specialty beer from [LaGrange brewery] Wild Leap.

What’s the latest news on your Pinewood Forest location of Hop City/ Barleygarden?
Think of it as a Barleygarden with a Hop City embedded into it downstairs. It’s opening in mid-November. It’s 9,000 square feet with a large rooftop. It’s what the Avalon [Barleygarden] would look like if I had more room to play.

Check out the full menu below (tap to enlarge) 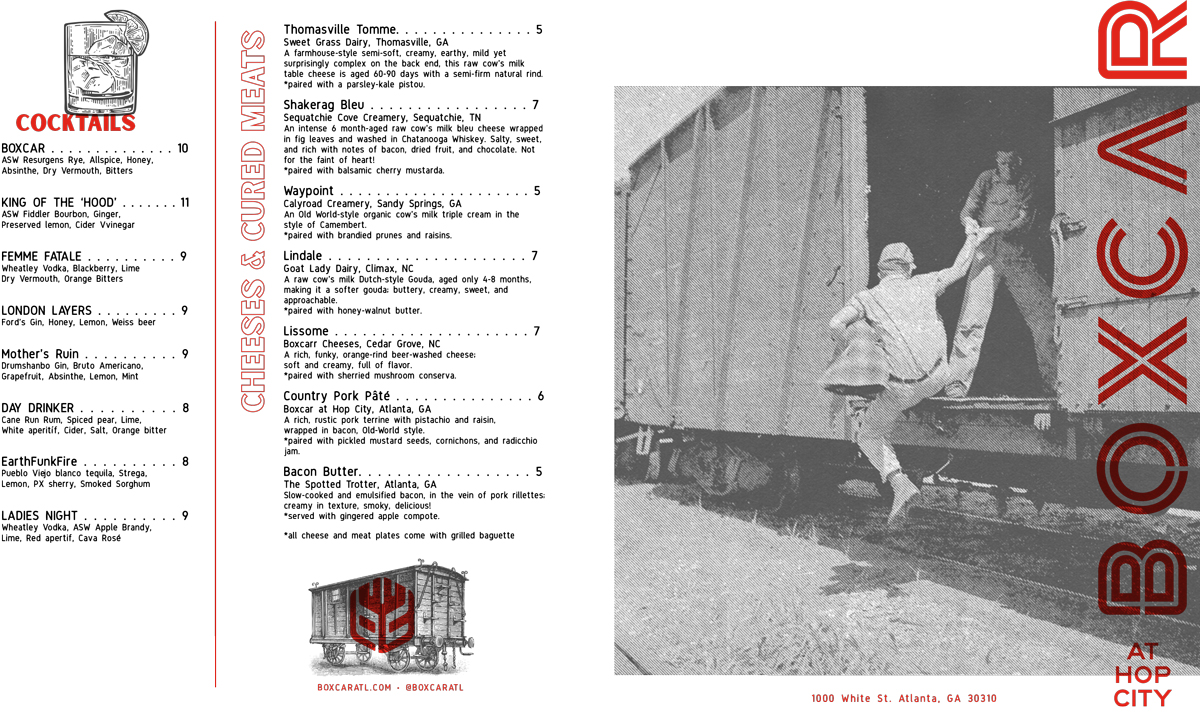