Home Uncategorized The Paces & Vine team wants the Select in Sandy Springs to... The duo is bringing in an unnamed chef from New York City to create what Lester describes as “an eclectic menu with a lot of seafood and a component of comfort food with a lighter interpretation.” He says it’ll bring together a variety of cuisines, from Italian to Irish to American. To that regard, the menu will feature eight to ten small plates and about the same number of entrees. There will be fish, steak, “light and bright” salads, and possibly late night oysters.

There will be a “broad variety” of wine at all price points, stemming from France, Italy, Australia, and America. This includes 30+ by the glass and about 60 bottles. “We’re really serious about our wine program,” Lester says.

To capitalize on City Springs’ open container policy and the Select’s parkside location, beer will only be served on tap. Expect about ten offerings, mostly local. Seasonal cocktails will be available, too.

“We want to be that neighborhood restaurant everyone goes to on a regular basis,” Lester says. “We believe there’s a transition [happening in the northern suburbs] with the [opening of the new] Braves stadium and the Battery and the [new] performing arts center in Sandy Springs.”

He describes the space—designed by Smith Haines of the Optimist and JCT Kitchen—as “light and airy with casual classic elements.” It will have an indoor/outdoor patio and terrace with a view of the fountains in the park. There will be an open kitchen and a private dining room that seats 75 guests.

The Select was named after Le Select brasserie in Paris, a place literary notables like Ernest Hemingway and F. Scott Fitzgerald would meet to discuss the transformations needed following World War I. “They would eat and drink and have a great time,” Lester says. “We thought there was something was very unique about that.” 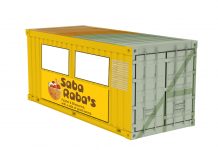