Metro Atlanta isn’t quite at food hall capacity just yet. Ph’east, an all-Asian food hall, is set to open at the Battery Atlanta in late November. [Editor’s note: Ph’east was delayed but opened on January 30, 2020.]

Mitch Jaffe of Prep Atlanta (a shared commercial kitchen) is the owner of the 5,000-square-foot food hall, which is bringing several popular local eateries to a part of town that’s currently pretty national chain heavy. Seven Chan, co-founder of Poke Burri and Lifting Noodles Ramen, helped select vendors for the development. “Being able to do open a food hall setting gave us the ability to be there in the Battery in a way we probably couldn’t before,” Chan says. “We’re the only Asian place in the Battery, and I want to say that we’re probably going to be one of the best Asian places in that part of the city.”

It wasn’t hard for Chan to gain interest from vendors. “We had a line out the door of people that wanted to be part of Ph’east,” he says. “We really wanted to choose people that could really represent their category of food the best.”

Those vendors include outposts of Chan’s Poke Burri (which won hearts on Instagram with their sushi doughnut) and Lifting Noodles Ramen in East Atlanta Village. Snackboxe Bistro, the Doraville favorite known for their flavorful Laotian staples like pork belly laap and kua mee (noodles with ground pork, egg, and crushed peanuts), will also have its second location here. The newest vendor added to the lineup is Fan T’Asia, a Cantonese stall from the team behind Bobo Garden on Buford Highway. Expect to find classics on their menu like sweet-and-sour chicken and walnut shrimp. Ph’east is also partnering with Truck & Tap food truck bar for a bar area called Tap at Ph’east, which will have 40 taps of beer, wine, cocktails, and sake. If you’re looking for a nonalcoholic drink, Kung Fu Tea (the only non-local vendor in the bunch) will sell bubble tea.

For Chan and the food hall vendors, it’s significant to branch out to the Battery. “I think for the whole area, it’s going to be a new, exciting thing,” he says. 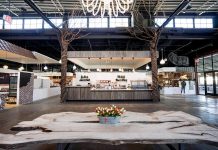 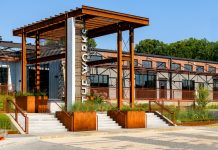