The Battery’s answer to Buckhead’s Painted Pin and Ormsby’s on the Westside has arrived. Punch Bowl Social, a Denver-based entertainment venue, is set to open on March 24 with 25,000-square-feet of games, food, and drinks. The Atlanta location will the the 13th nationwide and the first in the Southeast, with several more outposts planned to open this year. The two-story venue will feature private karaoke rooms, eight bowling lanes, a bocce court, two outdoor ping-pong tables, foosball, skee-ball, shuffleboard, 1980s arcade games, and virtual reality “parlors” (rentable rooms where you can play virtual reality games and order food and drink service). To accompany the amusements, Georgia chef Hugh Acheson, who joined the Punch Bowl Social team as their culinary director in 2016, has designed a “diner-inspired” menu, while the craft cocktail, punch, beer, and wine list was created by Patrick William, the company’s national beverage director.

“The core of Punch Bowl is we want you to have fun, and there are a lot of ways to [do that],” Acheson says. “The food is really fun, wide-spectrum, from-scratch cooking. There will be grain bowls, burgers, and fries. It’s a good mix. It’s well-purveyed, antibiotic-free, and as natural as we can get it for the volume we do.”

Acheson, who designed the menu for all of Punch Bowl Social’s locations, says the core menu is similar from location to location, but there are local blue plate and green plate (vegetarian) specials that change weekly. These could include spring salads with fava beans and asparagus or local flounder and grouper. Popular main menu items include the OMFG GF (gluten-free) Southern fried chicken, lobster bacon fries, and “It’s Nacho Mama’s” roasted cauliflower nachos. Weekend brunch will be available, too.

The beverages utilize local spirits and craft breweries wherever possible, and the namesake punches are designed to be shared and enjoyed by a group. There’s also a focus on non-alcoholic beverages, like milkshakes, coconut fresca, and cilantro fizz made with aquafaba. “A lot of millennials don’t imbibe as much as the previous generation, and we want to cater to that healthy lifestyle, too,” Acheson says.

The space is designed for guests of all ages, featuring an eclectic decor that melds Victorian, mountain lodge, and modern industrial elements. Picture oversized seating and faux stag heads. “The elements are blended together and spread across entire venue. We dialed up the Victorian a little more [in Atlanta],” says Punch Bowl Social CEO and founder Robert Thompson.

There is a 360-degree bar, a diner that seats 125 guests, and a rooftop patio. Wait service is available throughout the entire massive venue, which holds 1,000 people.

“It’s a place for people to let loose and enjoy,” Acheson says.

Want in? The March 24 grand opening begins with an invite-only event, followed by a two-hour ticketed party that includes free food and beverages and live music. You can purchase $20 tickets to that event here, and proceeds will go to The Giving Kitchen. At 9 p.m., the special events conclude and Punch Bowl Social will officially open to the public. 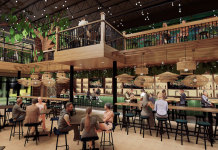