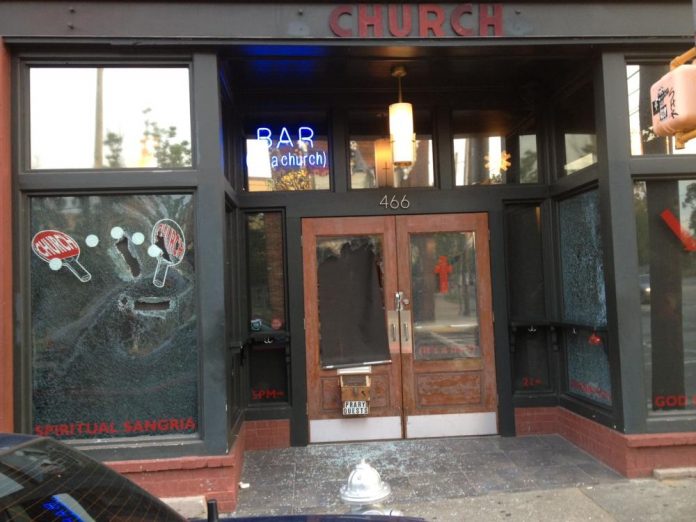 In the early morning hours today, vandals attacked Sister Louisa’s Church, a bar at the corner of Edgewood and Boulevard in the Old Fourth Ward. Owner Grant Henry says that front windows and doors were broken, liquor bottles smashed, and beer taps were left running but that nothing was stolen, including cash and valuables left in open view. Damages are estimated at $3,000. “This doesn’t have anything to do with a break in,” Henry says. “It was definitely targeted.”

At 5:12 am on Saturday, Henry answered a call from his alarm company alerting him to motion on the bar’s first floor. By the time he arrived minutes later, police were already on the scene. The front door windows, which depicted crosses, were both smashed. Bricks had been thrown through a window with the word “Church.” Henry stood outside while police investigated.

“The investigative unit came in and did what they do. Then they came out and said that it is clearly a hate crime. Because they didn’t steal anything, they took nothing, they left things of value, and they only targeted the word church and they targeted the booze behind the bar, you know, on the altar.”

In the past two years, the bar has become known as a successful pillar of the growing nightlife and dining scene near the corner of Edgewood and Boulevard, attracting local crowds and national press from the likes of the New York Times, Wall Street Journal, and People. The attention helped: Henry recently bought the building that houses his bar and the neighboring Corner Tavern and Café Circa.

Not all the attention has been positive, though. Henry says some neighbors, especially from the nearby churches, have complained and said that the bar is sacrilegious and mocking religion. 11 Alive ran a segment about the tensions last year.

For the past seventeen years, Henry has made art under the name Sister Louisa, mostly by painting humorous captions on paint-by-numbers religious works. The bar is decorated floor-to-ceiling with the kitschy work. Henry, who attended the seminary years ago and is now openly gay, says, “I’m not a Christian, but I always wanted to build a church where everyone is accepted, that’s for the sinners.” Above the liquor, which Henry calls the altar, he displays a trinity of sorts: Jesus, Martin Luther King, Jr., and Elvis. He sells “Spiritual Sangria” and keeps kegs in a confessional booth.

Despite the attack, Henry says, “I don’t feel like a victim at all. It’s a sign I’m doing the right thing.” After posting about the incident on Facebook this morning, Henry says that friends and patrons have poured in with gifts and well wishes. By cocktail hour today, the windows were fixed, booze replaced, and drinks were being poured again. Henry expects it to be a busy night.

A request for comment about the incident from APD has been made. We’ll update if we hear more from them.