Sweet Auburn Curb Market turns ninety this year. Originally known as the Municipal Market of Atlanta, it began as an assembly of open-air vendors on land laid waste by the Great Atlanta Fire of 1917, which started near a Decatur Street warehouse and consumed almost 2,000 buildings. The Atlanta Woman’s Club raised the money for a permanent structure, which opened in 1924. It thrived until the 1960s, when interstate construction bisected the Sweet Auburn neighborhood and the suburbs began luring residents from Downtown. The market was renovated in the early 1990s as part of Olympics fever, and then felt the brunt of the tornado that ripped through the area in 2008.

Despite some crippling swings of fortune, the market now has a promising new role in the community—as a small-business incubator. You can still shop for collards and oxtails and crawfish, but the dining options have never been better. When Pam Joiner arrived from Savannah to manage the market’s operations in 2005, there were nine vacant spots among the service counters. Even though the city, which owns the market, desperately needed rent funds to keep the place functioning, Joiner insisted that she would accept only singular tenants capable of attracting new customers. And last year the market hired Gene Kansas Commercial Real Estate, a company also involved in revitalizing the nearby Atlanta Daily World building that was badly damaged by the 2008 tornado, to help mastermind leasing and marketing.

Grindhouse Killer Burgers and Bell Street Burritos, two of the first new businesses under Joiner, drew more epicurean crowds to the building, and both have since expanded to freestanding restaurants around the city. The latest crop of vendors brings much-needed ethnic and health-minded diversity to the scene. Their timing is excellent: When the Atlanta Streetcar Project launches in early summer, the market will be one of the stops.

Arepa Mia
Lis Hernandez’s warmhearted corner, an outgrowth of her vending operation as part of the defunct Atlanta Underground Market, functions like a mini-restaurant, with communal seating at picnic tables. Office workers arrive at lunch, clamoring for her Venezuelan arepas—savory maize corn cakes—stuffed with proteins like grass-fed beef braised with red wine and sugarcane, fried fish with avocado and organic lettuce, and slow-roasted pork with plantains and caramelized onions. 404-880-8575, arepamiaatlanta.com

Destiny Organics
Think of this stand, which opened last August, as an extension of Atlanta’s burgeoning farmers market culture. It sells the gamut of Georgia’s finest food artisans, including White Oak Pastures grass-fed beef and pasture-raised chicken, Sparkman’s Cream Valley milk, and cheeses from Flat Creek Farm and Dairy. Destiny also offers a CSA (called the “organic box program”), so you can swing by the market for lunch and also pick up your weekly produce box. 404-366-7006, destiny-organics.com

Le Metro Creperie
Mother-and-daughter team Christine Taylor and Gwen Denninghoff just launched their business in January. They pulled off a design that feels remarkably like a bistro, with dangling fixtures that cast a buttery glow over a marble counter. Though you’d never guess from the delicate, crisp-soft texture, the crepes are gluten-free, made with organic flours such as buckwheat and garbanzo. Look for savory variations stuffed with tomato, mozzarella, and pesto, or ground lamb with pine nuts and raisins in a sour cream sauce. The sweet crepes hold seasonal fruits (the winter menu included caramelized persimmons and brandied pears). 404-659-1665, twitter.com/lemetrocreperie

This article originally appeared in our March 2014 issue under the headline “Curb Appeal.” 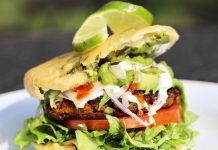