Chef Jason McClure, formerly of Villains (the quirky Midtown sandwich shop that closed in 2014) and Flip Burger Boutique, is opening Wade’s, a casual, modern American restaurant in Smyrna in August. Named after his father, Wade’s will anchor a small park at 1061 Concord Road and strives to cater to young families in the area.

“I’ve worked ITP my whole career but lived in Smyrna for 15 years. I wanted to be a part of my community directly and build something that really served Smyrna,” McClure says.

He will serve as front-of-house manager while business partner J.D. Childress (formerly of South City Kitchen and Lure) leads the kitchen. The pair are working together on a menu that includes appetizers and snacks, burgers, sandwiches, and larger entrees later on. A couple of Villains’s staples, like the “Hail Nero” kale Caesar salad and “The OddJob” Korean fried chicken sandwich, will be on the menu. Expect boiled peanut hummus, shishito peppers, a Cuban porchetta sandwich, and kids’ grilled chicken kabobs with tzatziki sauce, too. For dessert, there will be a moon pie shake, root beer float, and a banana split, all made with High Road Craft Ice Cream.

Wade’s will seat more than 100 people inside, with about 50 on the back patio and 45 on the rooftop deck. It will not accept reservations.

Its three bars will have a robust whiskey, bourbon, and scotch program and serve eight to ten seasonal cocktails. There will be twelve beers on tap, and a collection of Argentine, French, and Spanish wines (plus some domestics).

“We’ll be showcasing a monthly pop-up to highlight people in the community who want to play and experiment with their food,” McClure says. In addition, Wade’s may host live acoustic musicians on the weekends in the summer.

McClure describes the space as having a “slight 1950s vibe” with dark and cherry walnut woods, steel, and reclaimed brick elements. There will also be murals painted on the walls.

Take a sneak peek at the menu* (tap for larger view) *Menu is not final and subject to change 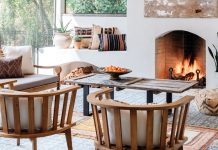 Room Envy: This cozy pavilion’s design was inspired by a trip to Morocco