Home Uncategorized What’s the one dish Todd Ginsberg wishes he knew how to cook?

13 Questions is a weekly series where we ask chefs 13 questions to get to know them outside of the kitchen. Todd Ginsberg is the chef and co-owner of the General Muir and Krog Street Market stalls Yalla and Fred’s Meat & Bread.

You dropped out of college to attend CIA. Looking back, do you think it was the right call?
Yea, it was the only call. I’m very fortunate that I get to do what I love. But is it necessary for all chefs? No, necessary is a very strong word. Can you be a great chef without being trained? Yea. Can you be Mark Zuckerberg and not finish Harvard? Yes. Culinary school is not necessary, but for me it was because I had never cooked before. I was taking a semester off [from Old Dominion University, where he studied business administration] because of finances, and I was waiting tables and would watch the chefs in the back cook. I went home and cooked for a couple friends and one of those friends happened to be my girlfriend’s mom, who asked me if I had ever thought about culinary school.

What’s one thing you wish you knew how to cook?
Pizza. A really great pie is hard to master.

When you aren’t cooking, what do you do for fun?
Spend time with my son. I have a three-and-a-half-year-old, Liam. He’s the best thing in the entire world. He eats anything that I eat, and we just go out and have a blast together. We go car camping by Lake Chatuge and hike Jackrabbit and Black Rock Mountain. This summer, he caught his first fish. He pulled it off the line with his bare hands; I was impressed. It was delicious.

What is your guilty pleasure snack or fast food?
Krystal Chiks

What was the last TV show you bingewatched?
Luther

If you weren’t a chef, what would you be doing?
I don’t know if I could do this, but I’d probably be an architect. They’re so hyper-organized and detail-oriented, but that attention to detail is one of the reasons I don’t like to do pastries. One of the things I love about cooking is I can just do it with my hands without a recipe.

What’s one deli item you haven’t been able to perfect in Atlanta?
We buy our nova.

Did you have any culture shock moving from the East Coast to Atlanta?
I was born in New Jersey and lived there until I was five. We moved every five years, but the biggest and most influential place I grew up in was Concord, Massachusetts. Where I was living in Boston, those people have been there for generations and that culture was steeped: the way they spoke, the way they acted, the way they ate. It was really highly developed by those people I was surrounded by in Boston. Atlanta is such a young city with such an influx of transplants, so a lot of that isn’t developed yet. But it’s also really awesome. There a lot of different cultures here and lots of different types of cuisine. It wasn’t necessarily culture shock, but that was my biggest observation.

Where do you want to travel to next?
I am leaning toward Patagonia and Marrakesh. I don’t travel as much as I’d like to.

What’s your favorite fried chicken and burger outside of your own?
For fried chicken, Busy Bee Cafe on MLK—it’s so ridiculously good. For burger, I would say Little’s in Cabbagetown.

Who were your role models growing up?
I probably didn’t know it when it was actually happening, but I would say my father was my biggest role model. I was clueless as so many adolescents and teenagers are, but he was a really patient, honest human being and one whose standards I try to hold myself to everyday. It’s a lot easier to do as a father than as a chef, the kind-hearted part.

Wine, beer, or cocktails?
Beer, something really light. I either just got done doing a lot of work in the yard or maybe it was a really long, grueling day and I’m still hot, so I just want to take a cold beer into the shower—the lighter the better.

What ingredient can you not stand?
I don’t like things that are very overpowering, but typically it’s the hand that uses the ingredients, not the ingredients themselves. Cardamom, lavender, green peppercorns, bay leaves are things that can really influence a dish that should be used as seasoning as opposed to the main focus. When I walked through a field of lavender in Provence, that was one of the most amazing experiences—it was overpowering—but I don’t want to taste it in my food. 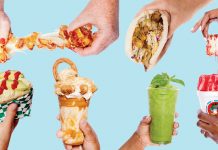 6 grab-and-go Atlanta snacks that are perfect for summer