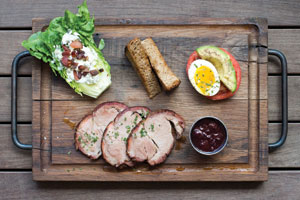 Buckhead is back, y’all, reveling in its first restaurant boomlet since the middle of last decade. And just like old times, each fresh-faced entrant quickly galvanizes a certain facet of the uptown community, spawning distinct social microclimates. At Kevin Rathbun’s KR SteakBar in Peachtree Hills, you can sense business deals closing or collapsing over short ribs and Barolo. Umi, the latest sushi sensation, and Del Frisco’s Grille (in front of the Mandarin Oriental Atlanta) lure the party people. With neon drinks in hand, restless souls sit for a spell, nibbling on whatever’s in front of them, but soon they’re wandering among tables to mingle.

Then there’s King + Duke, the most ambitious of the new arrivals, which establishes Ford Fry—chef-owner of JCT Kitchen & Bar, No. 246, and last year’s “it” restaurant, the Optimist—as Buckhead’s new dining honcho. He’s at work on a European-inspired seafood palace called St. Cecilia, replacing the Buckhead Life Restaurant Group’s eye-popping Bluepointe in the Pinnacle building. But his first area venture, an instant success, takes over another space formerly occupied by a Buckhead Life relic, Nava. No evidence survives of its nineties, Southwestern-blinged ostentation (the curving adobe stucco, the dancing Kokopelli figures). In its wake, King + Duke sets a chill Hamptons-like scene, particularly on its genteel patio, and the tone of the crowd follows suit.

Men in striped oxfords and dress pants, ties removed, cluster around the blue-tiled bar, chatting with bottles of Sam Adams Light in hand. Groups of young couples hog the beachy, low-slung chairs near the patio’s edge. Landscaping obscures their view of Peachtree Road, but cranes across the street loom overhead, signs of progress for the eight-acre Buckhead Atlanta development where they’ll be shopping for skinny jeans this time next year. Cougars with enhanced cheekbones congregate at tables under yellow-and-gray striped canopies alongside the restaurant. Inside, the decor of the long, slender dining room evokes the library of a secluded home in the woods: ashy gray oak floors, beige and black walls, leather accents everywhere. A shelf of books near the hostess stand nods to the restaurant’s literary name: The king and the duke are con artist characters in Mark Twain’s Adventures of Huckleberry Finn. The restaurant exudes a refreshing civility. Throngs pack the place at lunch and dinner, but the table-hopping is minimal. People are paying attention to their meal and to one another.

Though deep in empire-building mode, Ford Fry resists comparison to I. Pano Karatassos, the mastermind behind the Buckhead Life Restaurant Group. But the differences in their styles nonetheless mark a shift in direction for Buckhead blockbuster restaurants. Karatassos is a Spielberg among restaurateurs, taking broad themes—fusion, Southwestern, French brasserie, steakhouse, diner—and turning them into candy for the zeitgeist. Fry is more of a Ron Howard type. He weaves laid-back, gut-level Americana into his projects, striving for sophistication but ultimately choosing a sense of comfort over epic concepts.

In that vein, Fry centers the food at King + Duke on our national cooking obsession: the open flame. Most of the restaurant’s food is prepared at a twenty-four-foot, custom-designed hearth. It’s a fire-breathing beauty, this thing. The rig includes four grills that can be raised or lowered by crank wheels to regulate the heat, as well as a wood-burning oven with an exposed grate over the top that doubles as a stove. I don’t envy executive chef Joe Schafer—who collaborates on the menu with Fry and oversees daily kitchen operations—the task of mastering this beast.

And it did take a bit of trial and error after the restaurant opened in May for the kitchen to stabilize its output, but it righted itself and quickly settled in as a solid New American contender. Don’t expect surprises; just enjoy the soothing, often familiar dishes, the best of which come subtly cloaked in campfire aromas.

For a first nibble, zero in on the chicken wings—smoky-sweet little brutes that stoke the appetite. And while you’re melting a pat of butter over one of the complimentary Yorkshire pudding popovers, take a gander at the handsomely bound manual compiled by beverage director Lara Creasy. The centerpiece is the 200-bottle wine selection with an impressive range of prices and varietals. Creasy has penned some persuasive talking points for each wine. Her comments on a Chilean Chardonnay from French vintner William Fevre—“minerally and citrusy, fresh with a hint of saltiness, creamy but never buttery”—proved accurate, a happy surprise for $32.

Now go heavy on the starters. How fun to find a smartly reengineered onion soup, the beef broth spiked with pale ale, and gently pungent Mahón cheese melted over a crouton enriched with smoked bone marrow. Sheep’s milk feta and harissa, the complexly spiced North African condiment, lend salt and depth to a soothing duo of wood-roasted beets and carrots. Toast scattered with frilly crabmeat and slivers of avocado and radish would make for ideal noshing on the patio.

For entrees, I’m smitten with options meant for two. A whole roast chicken for $45 (including a fluffy salad) arrives carved into invitingly charred morsels. Well, it’s mostly inviting: The squeamish should know that the feet remain attached to the legs, and the curled talons may bring to mind the skeletal narrator on HBO’s Tales from the Crypt. The massive bone-in ribeye for $75, nicknamed “the King,” delivers every nuance of funky, tangy, silky, chewy meatiness you could possibly want in a steak. I’m less enthralled by the individual entrees with sweet, tame personalities—more like the boy you want beside you in study hall than the one you’d make out with under the bleachers. There’s Peking duck, whose skin can arrive a little clammy; ubiquitous trout with a prim little salad atop; and an amiable enough pork roast with kale that needs more than a quick wave over the grill’s blaze. (We’re Southerners. It’s time we got back to cooking the hell out of our greens.)

I’d rather order the burger, proudly bucking the thin-patty trend with a thick lump of beef on a domed bun, covered in onions and, optionally, a veneer of nutty Gruyère. Or I’d come for the ploughman’s lunch. It’s a filling yin-yang assortment, served on a wooden carving board, that includes a revolving roast meat (I savored rosy lamb shoulder); a baby gem salad with blue cheese and bacon; and toast with some sliced tomato, avocado, and onion relish, should you wish to compose an impromptu sandwich. And for dessert at either lunch or dinner: a textbook square of sticky toffee pudding, molten in its brown-sugar goodness.

What can I say? It is uncanny how Ford Fry continues to roll out universally appealing restaurants. And though he won’t be containing his efforts to Buckhead (he also has a “Mex-Tex” cantina on the docket for Inman Park’s anticipated Krog Street Market and a Mexican-themed project in Alpharetta’s forthcoming Avalon development), his approach to restaurants gives the community some needed grounding. May other Buckhead restaurateurs take heed.