Home Uncategorized A new bar from the Joystick team will showcase the scientific side...

Joystick Gamebar and Georgia Beer Garden owners Brandon Ley and Johnny Martinez, along with long-term general manager Ian Carlson, are plotting another entertainment-focused bar called By Weight and Measure. Located in the Collective at Coda food hall near Georgia Tech, By Weight and Measure aims to educate the public about the scientific techniques used in making craft cocktails. While mixology classes aren’t on the agenda yet, patrons will be able to see the drinks being made using machines like centrifuges, immersion circulators, and dehydrators.

“It’s a small space, and everything we do will be on display,” Carlson says. “It gives people the opportunity to ask questions.”

At 400 square feet, the wedge-shaped bar stall will only seat four or five people. Additional seating is available throughout the food hall, and Coda’s open container policy allows people to take their drinks to go.

“It’s all part of the show: a little bit theater, a little bit fun,” Ley says of the science. “It gives people something to watch while they wait for their drinks.”

Beverage offerings include six to eight beers by the bottle or can, a concise selection of wines by the glass, and six to eight cocktails that rotate seasonally. The bar also plans to offer a favorite from Joystick: a coffee-and-bourbon slushie called Knuckin’ & Buckin’, made with Old Forester bourbon, house cold brew concentrate, and sweetened condensed milk. In addition to Carlson’s signature slushie, there will be a tropical Manhattan made with banana-infused bourbon with coconut water ice cubes and lime, a peanut-infused bourbon and Coke called Simple Peanut Farmer, and an Ecto Cooler-like margarita.

Don’t expect the space to look like a laboratory; the By Weight and Measure team opted for warm woods and greenery to make the space feel comfortable and homey. High ceilings with large windows bring light into the corner space, which is located across from El Burro Pollo.

By Weight and Measure is slated to open in June or July. In the meantime, the team is focused on safely reopening Joystick Gamebar and converting the upstairs section of Georgia Beer Garden into Mambo Zombi, a new bar that pays homage to Latin American and Afro-Caribbean cultures. 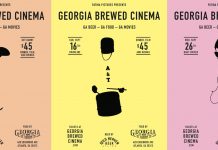