In the booming micro-distillery industry, there are, very generally speaking, two paths you can take: the easy and the hard.

The easy path consists of buying a tanker-trunk of off-the-shelf alcohol from a large-scale producer; running the juice through your column still a couple of times to soften the taste; perhaps blending in other ingredients to tweak the flavor; and hiring a good marketing firm to give your new product a compelling origin story and eye-catching packaging.

The hard way, by contrast, is what’s going on at 487 Edgewood Ave., where the co-founders of Old Fourth Distillery are kept busy producing their eponymous vodka—and putting the finishing touches on the recipe for a gin they plan to release some time in December.

Crafting a spirit from scratch in-house has proven far more time-intensive than the partners had imagined when they started two years ago. But the outcome has exceeded their most intemperate expectations, both in terms of sales and taste. Where most mass-produced vodkas are, at best, flavorless and, at worst, isopropyl-esque, Old Fourth’s vodka has a crème brûlée nose, a creamy mouthfeel, and a distinct vanilla finish.

That’s not because of any added flavoring, explains O4D partner Gabe Pilato, a trained sommelier.

“This is one of the few vodkas being made by hand in one location,” he says. “Although the base spirit is made from cane sugar grown for us at a farm in Louisiana, the end product contains no actual sugar. The perceived sweetness is a result of the small-batch process.”

In the five months since the vodka hit shelves, the local cocktail community has taken to it like a drunk to a lamppost. The clear spirit has found its way onto otherwise whisky-and-bitters-heavy bar menus at such serious watering holes as One-Eared Stag, Ration & Dram and the Luminary. At Decatur’s Kimball House, where “vodka” is usually a four-letter word, Old Fourth is the only vodka on offer.

“When you see it listed as a cocktail ingredient at a great bar, it’s like being in a band and hearing your song played on the jukebox,” says Justin Gray, another O4D partner who oversaw the build-out of the distillery. “I’ve seen one place where the bartender uses it to make a rosemary tincture.”

With sales continuing to rise, the distillery currently moves about 350 cases of vodka a month, with most of the inventory going to Georgia bars and restaurants. The partners have already started looking for space in which to expand operations; the existing facility will max out at 500 cases a month.

Meanwhile, there’s gin on the way. Over recent weeks, the O4D partners, who include brothers Jeff and Craig Moore, have used a form of crowd-sourcing—courtesy of booze-savvy friends and local bartenders—to help narrow down a roster of 14 potential gin recipes developed through experimentation with a small, 20-liter pot still.

“We’ve pretty much settled on the final product,” says Pilato, who describes the winning concoction as an “old-school London dry gin” strong on juniper with accents of caraway and pink peppercorn. “We didn’t want to get too crazy with botanicals. The ultimate test was, will it work in a gin & tonic or a dirty martini?”

Even before the gin bottles have been ordered, however, the partners already have their sights set on the final goal: aged whiskey. Just this month, they took delivery of 50 53-gallon white oak barrels that will be filled with freshly distilled bourbon and rye and—pending the acquisition of permanent racking space—stored in a friend’s garage to begin the long maturation process.

If all goes well, you can add Old Fourth whiskey to your Christmas list—in 2019. 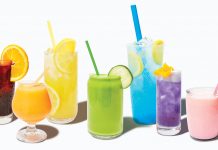