Paper Plane, the cocktail bar behind Victory Sandwich Bar in Decatur, will shut its doors at the end of the month. Plans are in the works for a new concept to open in time for a preview at Victory’s big luau September 13, owner Ian Jones says. Meanwhile, the space will undergo renovations to tie together the inside and outside spaces. Though Jones isn’t saying much about the new concept, he alludes to a possible tropical theme and says Little Trouble and Victory bartender Shanna Mayo will lead the cocktail program.

Why did you decide to close Paper Plane?
We work very hard to try and do everything the best we can. We feel that Paper Plane has gotten to the point where it was not growing or developing enough. It was good but not as great as we wanted it to be. It’s better to reformulate it into something a bit more in-tuned to success.

How will the new concept accomplish that?
We’re going to make it so that it’s less difficult for someone coming from Victory—less jarring in terms of style. It’ll be a place with great cocktails and a different environment, but we don’t want it to be some place people only think of for special things, which is what Paper Plane had been turning into.

Did your decision to close Paper Plane have anything to do with Paul Calvert leaving the company?
It did not. The split with Paul was very amicable. There was a time when we very much needed each other’s assistance, but as we grew, we had more people who had those skills. [Paul’s] goals were more about become a consultant and a writer and a journeyman. Our focus was in house; plus some of the original concept got away from us a bit.

You just opened Little Trouble, which is a cocktail bar. Will it serve the same audience?
We’re taking the lessons we learned from Paper Plane about what does and doesn’t work and applying them to Little Trouble. It’s a different clientele on the Westside. Little Trouble is larger. The difficulty of Paper Plane is it only has five tables—or twelve if the weather is nice. We focused too much on the restaurant side when we started. It’s difficult to mesh people who want to dine for two-and-a-half hours and people who just want to come in and get a great cocktail. Little Trouble is definitely more tuned to the drinker. The food is great food, and there is a lot of it, but you can sit anywhere and have a drink or food. At Paper Plane, half of the clientele thought of us as a nice restaurant.

So what does that mean for the new concept?
It’ll be more on the bar side. We always meant for Paper Plane to be more of a complement to the Victory concept—an elevated version. You’ll be seeing more casual bites to go with the drinking side, as opposed to a restaurant. Paper Plane, at its best, has always been a great bar.

Can you tell us anything else about the new concept?
We’re going to kick back to some of the original unsung roots of the current cocktail movement. Thematically it will tie in with what we’re doing in the back. Paper Plane isn’t so much saying goodbye as saying aloha. Shanna from Victory will head it up over there. The style of what she does best will be a perfect match. 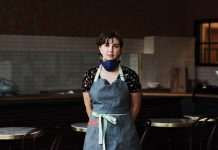