This August, a year after starting her beer-making career at Chicago’s Goose Island, Sarah Green joined SweetWater Brewing Company as the newest member of its nine-person brewing team. A staffing change at the largest craft brewery in the Southeast wouldn’t normally be newsworthy—except that of the estimated 100 full-time brewers at Georgia’s 47 craft breweries, Green is the only woman.

Green, 27, studied anthropology at the University of Illinois at Chicago and worked as a paralegal for three years before becoming a tour guide at Goose Island to earn extra cash. She eventually joined their marketing department and soon became an intern brewer, where she fell in love with the technical side of beer making. “One 12-hour day in the 100-degree brewery, and I was hooked,” she says. “I’ve never had a job that mentally and physically challenged me the way brewing does. Every day you’ve got 20 to 30 tanks going at different stages of fermentation; you’re multitasking like crazy keeping track of when you’re going to dry hop, when you’re going to pull yeast.”

From PR to taproom management, women are well represented on the business end of beer making. And up until the late 18th century, when beer switched from a home-based to a commercial enterprise, it was mostly women who produced and sold ale. Yet it’s rare to find women brewing today.

Nancy Palmer, executive director of the Georgia Craft Brewers Guild since 2014, blames a lingering perception of the beer world as “male”—a perception bolstered by bikini babe–soaked marketing campaigns. “Although the number of female beer drinkers has increased drastically over the past several years, the increase in female home brewers hasn’t been nearly as large,” she says. “Home brewing is still the main way [that people] learn how to make beer, so we’re not seeing as many women entering professional brewing from that angle.” The lack of diversity is to the industry’s detriment, says Palmer. “We’re relying on too small a group for inspiration on recipes and processes.”

Brewing is also—as Green describes—a physical, dirty job. “And you don’t have a ton of women signing up for dirty jobs in general,” says Palmer. Indeed, the rigors of professional brewing aren’t for everyone. Before Green, Brittany Orschel of Wild Heaven Craft Beers was the only female brewer in Georgia. Last May she transitioned to sales and events.

“I really enjoyed brewing, but it’s very challenging,” says Orschel, who entered the field after working in chemistry and molecular biology. “The super-long days were hard. On our 30-barrel system, we’d be starting at 5:30 a.m. and going until 8 or 9 p.m. It wears you out.”

Since cofounding the Porter, a gastro­pub in Little Five Points, in 2008, Molly Gunn has had a front-row seat for the steady increase in female craft beer enthusiasts. (Women ages 21 to 34 have become some of craft beer’s strongest supporters, accounting for 15 percent of total consumption.) She says female beer fans, though growing in number, are still recovering from America’s “puritan culture” around alcohol—the idea that booze is for men and fastidious temperance for women.

Brewing also aligns with other male-dominated areas of study: STEM fields. “Home brewing requires at least some technical or science expertise,” says Gunn. “So in addition to the association between beer and men, there’s the idea that the sciences are a ‘male field’ as well.”

In a hopeful sign, Green won’t be alone for much longer. Longtime home brewer Kathy Davis is preparing to go pro, with plans to open Abbey of the Holy Goats in late 2015 or early 2016. The production facility, which will focus on Belgian and sour beers, will be the first female-owned brewery in the state. And with that, the number of full-time professional female brewers in Georgia will double.

“I’m not afraid to lift kegs and run a forklift,” says Davis. “I hope the women who visit my brewery will be inspired to get involved not just in drinking craft beer but brewing it themselves.”

What craft beer will you drink on Thanksgiving?
We asked four leading women in Georgia’s brewing scene

Liquid Lunch Peanut Butter and Jelly Porter, Terrapin
“My family mostly drinks Bud Light and Coors Light, so this one will be fun for everyone to try. It should go well with dessert.” —Brittany Orschel, Wild Heaven Craft Beers

SweetWater 420
“I love it for the memories it conjures: college tailgates, backyard parties with friends, renovating the house with my husband.” —Kim Jones, CEO of SweetWater Brewing Company

Theophan the Recluse, Three Taverns
“This imperial stout is a fantastic sipping beer, and I really enjoy drinking it with dessert.” —Kathy Davis, owner of Abbey of the Holy Goats 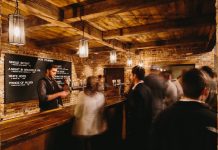 The most anticipated Atlanta craft brewery openings in 2016 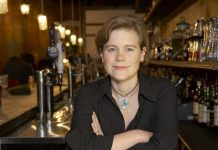