Home Uncategorized Back to school: 5 classes to sharpen your kitchen skills Best for… Serious beginners
The Cooking School at Irwin Street
At the beginning of the Superfoods class, chef Tony asked us to rank our kitchen skills on a 10-point scale. Most fessed up to being a timid four, but we were in good hands at Irwin Street Market’s school, which—as the website notes—caters to people who “frankly hate to cook.” Prepping the entree (pesto salmon with quinoa) felt akin to helping a relative in the kitchen. We chopped garlic and mixed the salad dressing in pairs, while Tony worked the gas range, baked the fish, and shared cooking tips. (My favorite: Locavores can swap pecans for pine nuts in their pesto.) In the end, we sat down for a family meal. And just like a relative, Tony insisted we have seconds.

The basics
Founded by Jake Rothschild of Jake’s Ice Cream. Lessons run 90 minutes and, depending on programming, max out at 80 students. Book at irwinstreetcooks.com. Best for… Wannabe Chefs
The Cook’s Warehouse
Truth be told, I’d never minced a shallot, so when chef John Wilson asked if he should show us how, I was a little too quick to respond, “Yes!” After all, I didn’t want to be the person he talked about in front of next week’s class—like the poor sap who’d dumped an entire bowl of salt in the soup. Each of us had our own chopping boards and pitched in to prepare a Mediterranean feast of lamb, roasted fennel, a salad, and a sweet ricotta and pasta pudding. For this menu, “hands-on” meant mostly chopping, unless you count rubbing mustard sauce on a lamb shank as a technique. Nonetheless, the informality of standing around a counter lent itself to foodie talk, and I picked up dozens of random tips. Least of all, how to mince shallots.

The basics
With more than 800 classes annually at four locations, this is the largest cooking school in the Southeast. Book at classes.cooks­warehouse.com. Best for… Grape Nuts
Atlanta Wine School
Classes at Atlanta Wine School cater to relaxed cooks who, like me, think that every recipe should start with a glass of wine. A recent class on seafood kicked off with a glass of Sauvignon Blanc and a platter of cheese and crackers. Soon an instructor appeared and called us to the large communal island—outfitted with two sets of burners, plus a sink—where we were divided into teams and assigned dishes. As someone who’s a bit lazy in the kitchen, I was happy with my team’s assignment: a shrimp ceviche cocktail, the preparation of which required not much more than squeezing a few limes. It allowed plenty of opportunity to wander around—wineglass in hand—and eavesdrop on everyone else’s hard work. Class ended with a seated communal meal—plus more wine, of course.

The basics
Each class runs two and a half hours. Limit 12 students per class. Book at atlanta­wineschool.com at least one to four weeks in advance. Best for… Carnivores
Pine Street Market
Don’t go into the basic butchery class at Pine Street Market expecting heirloom cutlery. After all, it’s a butcher shop, preparing 1,500 pounds of bacon, another half-ton of sausage, and dozens of pork chops and loin roasts every week. Owner Rusty Bowers started our class by slicing three slabs of Gum Creek Farms pork belly into four pieces so we each had our own. We rolled and strung it together for roasting before stuffing a shoulder loin with housemade bacon, celery leaves, olives, and spices. Finally, we broke down a whole chicken. We took all that meat home with us (the pork belly alone must have weighed three pounds), after Bowers fed us a Lowcountry boil of chicken and cabbage and treated us to a few growlers from the beer store next door.

The basics
Classes are held every Saturday and include a butcher boot camp, a sausage-making class, and a whole-hog class. Most classes run three hours, and capacity tops out at around a dozen. pinestreetmarket.com Best for . . . Drinkers and Shakers
H&F Whisk(e)y Society
Everyone was tipsy on this sunny Saturday afternoon at Holeman and Finch Public House. I was one of 14 who had signed up to taste—and learn—our way through 12 flights of Scotch. The class, lead by whiskey expert Casey Teague, was part of an educational program that includes bartending as well as wine classes. “Class breaks down halfway through when everybody is just drunk,” joked Teague just before starting. Sure enough, as we emptied our glasses and learned about single malts and sherry barrels, students grew louder. By the end, hearing Teague was about as likely as leaving to hit the gym.

The basics
Each class runs two and a half hours. Limit 24 students per class. Book your seat at brownpapertickets.com at least one week in advance. 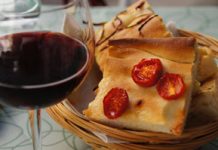