Asked to pick an accolade she’s most proud of from a barrel of architecture awards, Vivian Bencich doesn’t hesitate.

The firm she founded with husband John in 2001, Square Feet Studio, won first place in Contract magazine’s 2016 Inspiration Awards for work on Staplehouse, which Bon Appétit likened to “visiting an old friend’s house” in declaring it America’s best new restaurant that same year. It was the first national honor for the growing firm of 11, whose portfolio ranges from the industrial sophistication of departed Abattoir to cozy Kimball House and a colorful, rambunctious Mellow Mushroom in Decatur.

The Benciches met while studying architecture at Georgia Tech. They logged several years with large firms, with Vivian also becoming a registered interior designer, before they sensed a void in the Atlanta market and founded their more inclusive, dexterous studio in a bedroom of their bungalow.

“When we started doing what we’re doing, with the intertwining of architecture and interior design, I don’t think there was anybody in Atlanta that did it that way,” recalls John.

Vivian says the firm has avoided relying on a signature style. “[Residential architect] Bobby McAlpine said we had genius loci—it’s ‘of the space,’” says Vivian. “You walk in and get what this is about. That’s really the only thing that unifies them.” 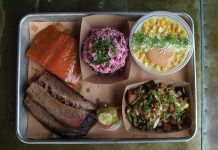