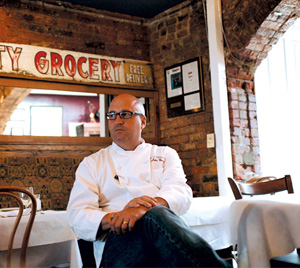 Foodies converge on William Faulkner’s hometown each fall to discuss—and taste—regional favorites such as country ham and Dr. Pepper at the Southern Foodways Alliance’s celebrated symposium. The gastronomic party, scheduled for October 22 to 24, is perfect for a town where food and culture rule from the manicured Ole Miss campus to the historic downtown square.
STAY
Book in advance to score a prime room in a cozy residential neighborhood near the square. Front-porch rocking chairs and modern amenities tempt at 5Twelve Bed and Breakfast, ideally situated between the square and campus. Musician-owner George McConnell played guitar for Widespread Panic before turning his attentions to running the 105-year-old property. Another option is the full-service Downtown Inn, steps from boutiques and restaurants. Tip: Thousands of Rebels football fans descend on Oxford for home games, which include righteous tailgate parties on the central campus Grove. Make reservations well in advance to join the festivities, or plan around the football schedule for a quieter trip.
EAT
This town has a seriously sophisticated dining scene. Follow lawyers and professors upstairs for late-afternoon cocktails at City Grocery bar. Patrons might glimpse owner John Currence, the James Beard Foundation’s Best Chef South of 2009, taking a break before heading down to prepare marvels such as red-curry-braised pork belly with sweet peppers, fresh basil, seafood dirty rice, and sesame-grilled asparagus. Don’t miss his newest venture, Snackbar, a bistro-influenced spot hiding just north of the square. Try the glorious, duck-confit-based croque monsieur. The Yocona River Inn, home of Oxford’s best steak, burned last year, but owner Paige Osborn has revived its spirit with Yocona in Exile. Or try Taylor Grocery & Restaurant, a casual place famous for one thing: perfectly fried catfish.
DO
The theme of this year’s SFA symposium is the Global South, which will explore the recent influence of international cultures on regional cuisine. Arrive on Thursday to catch a live broadcast of Thacker Mountain Radio. The program showcases this college town’s affection for all things literary and musical, with live bands and readings from luminaries such as former Atlanta contributor Roy Blount Jr. One of three locally owned Square Books stores provides the show’s cozy venue. Another must is William Faulkner’s home, Rowan Oak, with oak-shaded grounds that convey a fitting Southern Gothic mood. Faulkner purchased the antebellum mansion and lived there for more than 30 years. The short drive over along South 11th Street passes some of Oxford’s oldest and most gracious homes.
Photograph by Brandall Atkinson
Advertisement