Home Uncategorized An excerpt from C.T. Vivian’s posthumous memoir, It’s in the Action

For his posthumous memoir, It’s in the Action: Memories of a Nonviolent Warrior, Vivian, who Martin Luther King, Jr. called “the greatest preacher to ever live,” revisits his seven decades of activism and the life lessons resulting from those strategies toward advancing equality for all people.

The coming-of-age story’s 224 pages, co-written with Steve Fiffer, actively flash back to Vivian’s experiences as a member of King’s executive team, a Freedom Rider, and director of national affiliates for the Southern Christian Leadership Conference.

“Those involved in the movement knew that the only way to win was to help white America hold white America accountable for what it said to believe in,” Vivian’s son, Al Vivian, says. “Every idea they used was connected to the Constitution and the Bible. That way, white America could not run from the issue because this is what they bought into.” 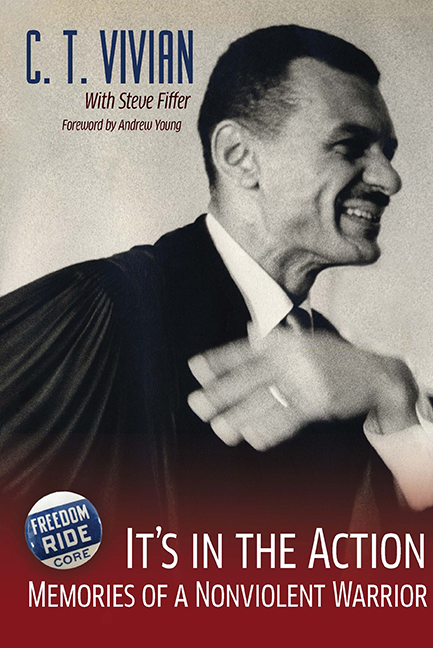 It’s in the Action, which opens with a foreword by Ambassador Andrew Young, primarily takes place during the 1950s and ‘60s. Vivian, who authored 1970’s Black Power and the American Myth, retells the physical attack Sheriff Jim Clark inflicted onto him during a highly publicized voting rights march at a Selma, Alabama, courthouse in 1965, recreates his first sit-in in Peoria, Illinois in 1947, and how his collaboration with John Lewis and Diane Nash helped Nashville become the first southern city to desegregate lunch counters in 1960. The book doesn’t get to take a deep dive into Vivian’s post-Civil Rights Movement work as a diversity consultant, community organizer, and advisor to five U.S. Presidents due to the fact that his health began to deteriorate as the book was being completed.

It’s in the Action: Memories of a Nonviolent Warrior illustrates Vivian’s dedication to humanity, which could function as a blueprint for how leaders must act in order to create change and afford better opportunities for all people.

“I hope the book gets the recognition it deserves,” says Al Vivian, who is the current president and CEO of Basic Diversity, the workplace consultancy his father founded in 1974.

“Dad was really good at motivating people and getting them to see the connection between the movement and the Bible. He and King’s entire team didn’t see the movement as political; they saw it as a moral, spiritual battle. They succeeded because they knew God was on their side, and that’s why they did not mind putting themselves in harm’s way.”

Excerpt from It’s in the Action: Memories of a Nonviolent Warrior by C.T. Vivian with Steve Fiffer (NewSouth Books, March 2021)

The basis of all human rights today is the result of a movement that moved all of us. In fact, the lives and lifestyle of almost everyone in America today, regardless of color, was formed or decided by their action, or reaction, to the civil rights movement as led and declared by Martin Luther King Jr. For most of those in the South, past or present, Black or White, our incomes and education and religion have been affected and improved by the movement. Martin’s movement was the beginning of the transformation of America—a true transformation of America and the American Dream.

Those of my generation and those who grew up in the 1960s can’t help but know something of this great man and his deeds. Those who weren’t alive when Martin was assassinated in 1968 study him in school and know he did something important enough to get a holiday named after him—though not without a too-long delay. But all too often I come across young men and women with little or no knowledge of Martin. It saddens me but no longer surprises me. Subjects we should be studying closely are often observed only through the rearview mirror. And sometimes—driven by the need to come up with something new or shocking—these observations sully or distort the view, reducing our ability to see the big picture.

As someone fortunate enough to have known Martin from the mid-1950s until his death in 1968, to work side by side with him, to laugh and to weep with him, I’m often asked to provide a perspective on the man and the movement he created and led.

My thesis is simple:

Martin became America’s greatest social strategist by taking the Bible in one hand and the Constitution in the other, and then turning them on America like a mirror. He used these two great documents that undergird the laws, thought, and principles of this nation and made America take them seriously. Speech after speech, one direct action nonviolent confrontation after the other, changing one law after the other, in one state and then another, he made Americans face who they really were.

Nonviolent direct action helped us to free ourselves and others at the same time. Even those who did not think of themselves as involved were freed from evils of the spirit they could not see or acknowledge. This people’s movement forced the most powerful nation in the world to say “yes” when it wanted to say “no,” and it empowered passive bystanders to energetically join the freedom chorus. Together they forced America to admit that it was a sick society.

The movement put America’s mind in conflict with its mythical self and helped it regain a path to sanity. Martin made the people of this nation ask a basic question, “Who am I?” Moreover, to ask the basic philosophical question, “What does it mean to be human in my own time?” And, “What is my nation’s belief system, and does it reflect the person I choose to be and what I want my family and neighbors to become?”